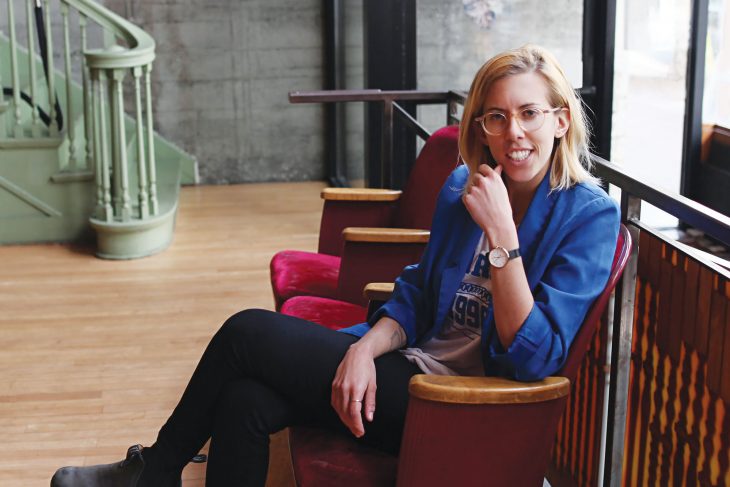 Five years ago, after college graduation, Claire Buss decided to move to Seattle sight unseen because, you know, it seemed like a cool place to live. She and her father drove from her native Pittsburgh and, without knowing any better, arrived in downtown Bellevue.

Once she found the other side of Lake Washington, Buss was welcomed into Seattle’s DIY art scene. “I would end up in these conversations where everyone was like, ‘What’s your project and what’s your band?’” she says. As inspiring as it was, “that was a little intimidating, because it’s like, oh, I have to be an artist to fit into this community.”

So Buss and her friends put on a homemade game show in the living room of their Greenwood house.

From the beginning, she was serious about The Future is 0. She assigned her roommates parts and production duties and framed each episode with overarching themes she could spoof, like gender norms or gentrification. Contestants answered trivia questions and played low-budget, stupid-genius games like “Are You Fucking Kidding Me,” discerning between real news and Onion headlines, and “Get in This Box,” which was entirely literal.

In early 2017 Buss relocated The Future is O to Northwest Film Forum, where she’s since done three episodes. The bigger venue accommodates bigger audiences and more elaborate games. (The most recent episode featured “Isolation Station,” which sequestered visual artist Mario Lemafa in a mock-up efficiency unit.) As her platform has increased, so have the show’s production values. She’s expanded her writing team and commissioned theme music and animation from Seattle artists. With her friend Kat O’Hara producing—and playing a harried but competent producer on the show—Buss plays the quick-witted host, Clay Buff, sarcastic and in total control even as the proceedings careen toward chaos. Contestants are folks from all walks of Seattle’s creative community.

The Future is O is remarkably sophisticated for an essentially unprecedented happening that’s part sketch comedy, part improvised performance art, part beer bash. Buss genuinely adores the classic game-show format; hijacking it allows her to poke fun at our hyper-consumptive existence and speak truth about it at the same time. The driving force, she says, is “low-key doom and gloom.”

Later this year, Buss will host a 24-hour telethon to raise funds for the show, and then she’d like to take The Future is O to LA—and ultimately to actual TV, incorporating sponsors and commercials and all the crass bullshit the show ridicules.

“It’s this weird balance of being like, Yeah, we’re going to make fun of you. And you’re going to pay us for it. That is my ultimate dream.”