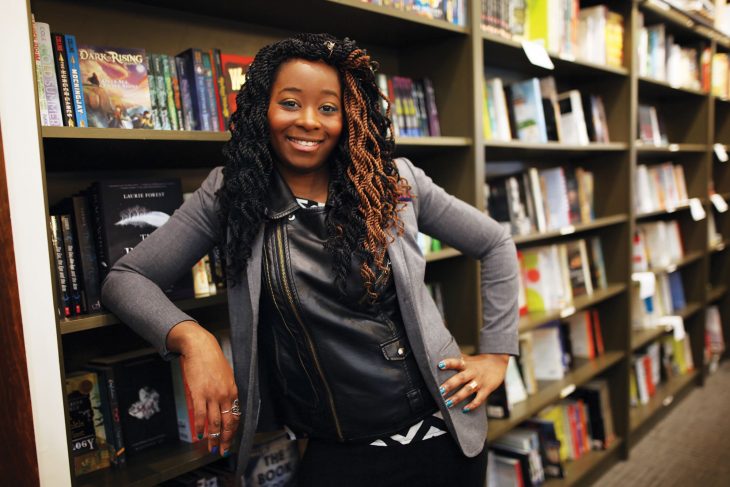 On paper, Jekeva Phillips is an enigma. It’s unusual for someone to work as often in traditionally solitary art forms (poet, novelist) as they do in wildly collaborative ones (improv comedian, aerialist, producer). In person, she’s more riot than riddle: a writer and idea machine driven by an all-encompassing enthusiasm for the new, the fun, the collaborative. It’s not that she’s interested in “bridging the gaps” between art forms and communities—she knows that those gaps are imaginary.

“They may seem like disparate mediums but they all feed each other,” Phillips says. “Seeing a character or a scene and letting that come alive, whether that’s in your brain, or on a page or a stage—that’s something that both writing and improv cultivate in me.”

Phillips decided to pursue writing while at Kamiak High School in Mukilteo, when a scene she wrote in a play got actual real-life laughs. She was hooked and followed that fire to study screenwriting, directing and creative writing at Point Park University in Pittsburgh.

As a post-grad looking for a literary community back in Seattle, Phillips got frustrated. “I found it really hard to make connections with people,” she says. She started the quarterly publication Word Lit Zine as a way to highlight and build community for young and/or new writers. Bursting with informative articles, writer profiles and local fiction and poetry, the zine is still largely a one-woman operation, which Phillips runs on top of a day job and an exhausting list of artistic activities: She also runs Bibliophilia, a hybrid storytelling festival she founded in association with the zine. Her poetry chapbook came out in 2016 and she’s writing a novel. She’s a cast member at CSz Seattle, Home of ComedySportz, based at the Atlas Theatre in Fremont. She studies aerial silks. She taught herself sign language. She’s learning graphic design.

But Phillips spends as much time making space for others’ work as she does her own. People ask her for organizational help and she’s happy to give it. To wit: She serves as managing director of Lit Crawl, and she’s currently collaborating with comics Kinzie Shaw and Natasha Ransom on curating INTERSECTIONS Festival, “a comedy festival focused on equity, inclusion and representation” slated for this spring.

“As artists, we’re all in this together,” she says. “It doesn’t matter if you’re a poet or a painter. We’re all feeling things right now, so let’s do what we do as artists and try and make some sense of our world through our art.”