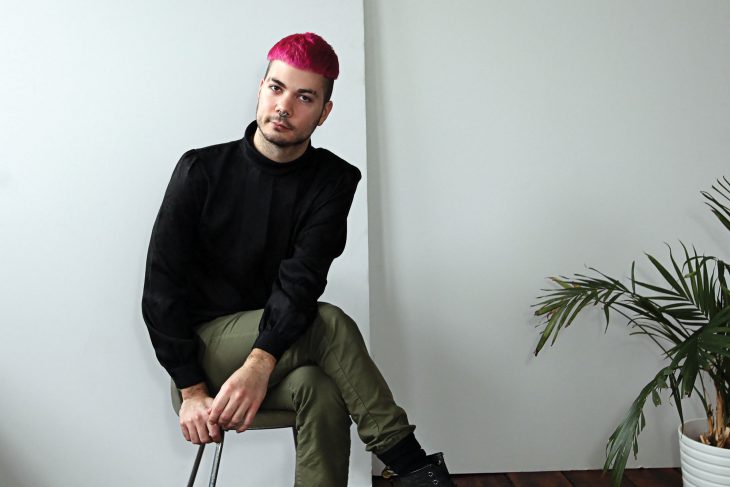 Dancers dressed in street clothes walked among observers inside the pavilion at Olympic Sculpture Park, occasionally breaking into brief but unhurried solos and duets; their subtle choreography—slow rotations, low kicks, halting spins—often blended into the crowd. They instructed the audience to move around the venue, lie on the floor and even perform short choreographed sequences amid the short, white pylons dotting the space. Huge white screens hung from the ceiling, illuminated with live-recorded images of the dancers and audience members, who slowly realized they were onscreen. This was PYLON I, a 2016 piece by Coleman Pester focused on the effects of mass surveillance on the perception of identity.

“I don’t want to create dance that’s only consumed for a moment,” says Pester. “I want to create performing art that builds cohesion among artists and audience.”

Pester’s mature, constructive use of technology provides effective live commentary about how societal perceptions shape how we express ourselves. In PYLON II, at 2017’s 9e2 festival of art and technology, dancers wore masks to emphasize the importance of anonymity in today’s culture of surveillance and social media. They crawled down a red carpet in the dimly lit King Street Station while video projections of audience member’s Facebook profiles were cast onto screens around the performers.

Pester began playing with audience participation to alter the traditional dynamics of a concert dance performance years ago. In 2012’s 30 unsure steps to my seat, for example, audience members sat in a circle around the stage, blindfolded, while dancers performed around them. Raised in conservative South Texas, Pester earned a BFA from the LINES Ballet/Dominican University dance program and studied dance in Australia, New York and northern Israel before settling in Seattle in 2012. Their experience with the Kibbutz Contemporary Dance Company at Kibbutz Ga’aton shaped the vision for their present work.

“The way that dance is incorporated into everyday life on the kibbutz is an arc for the whole PYLON series; I present the problems with our society to the audiences and hopefully we can all decide how to make [a meaningful connection] possible for ourselves.”

The third installment of the PYLON series takes place in February at Seattle Center’s Cornish Playhouse. In it, lighted cubes represent constantly moving “apodments” and dancers navigate the cubes in front of projected drone footage of the changing Seattle skyline.