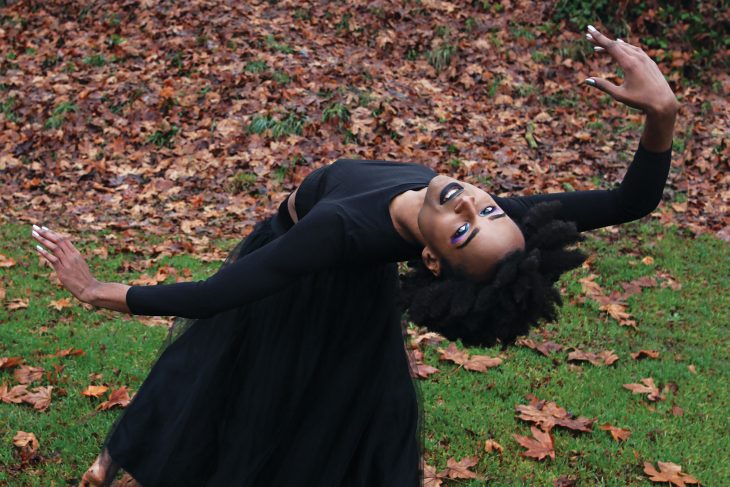 Randy Ford is not just a dancer, they’re an experience. On stage they claim space with a fiery playfulness that seems to say this is all mine and I’m taking it…but don’t worry, I’ll share. Off stage, Ford is a sheer force of positivity, the kind of bubbly, open-hearted energy that can make anyone feel like they belong. It’s easy to get swept up.

Back in 2015, Ford exploded onto Seattle’s contemporary scene with their solo, Freedom is Mine. Whipping their head back and forth at seemingly impossible speeds, they carved through the space with raw energetic power and punctuated articulation. The solo was Ford’s premiere with the freshly minted Au Collective, a dance group of people of color, queer people and women. “Those are basically all the facets of me,” they say with pride. Before Freedom is Mine, Ford had been auditioning for more traditional companies with a single director. “I realized I would never be able to fully be myself because it can be so gendered, or under the direction of someone. I wanted to be my own artist.” Working with Au was the first time Ford really felt ownership of their art.

Since then, Ford has been popping up everywhere, from House of Dinah last year at On the Boards to Legendary Children at Seattle Art Museum, to BenDeLaCreme’s drag productions. They’re performing with Au in Tint Dance Festival in February, and in Dani Tirrell’s Black Bois at On the Boards in April, a process for which Ford cannot contain their enthusiasm. “The more I rehearse, it’s just like, oh my gosh, this is so beautiful,” they gush. “I’m playing part of myself, all of myself. I am represented. I am in this.”

Ford has just as much passion for their work offstage as on. They’ve started an afterschool dance program at Wing Luke Elementary and do admin work for Au, which has become as much about community outreach as performing. “We’re realizing the world we want to live in more. At first we were all just dancers, but now I realize I really love building platforms.”

Creating intersectional visibility is essential to Ford. “I don’t want to be the only Black transfeminine contemporary dancer out here because I know there’s hella of us.” Performing at a recent Timbre Room event, Trans POC Taking Ovah, was a big moment of pride. “So many of the ancestors, the shoulders that I stand on, are there so I can be here. I’m trying to be the shoulders for someone else.”