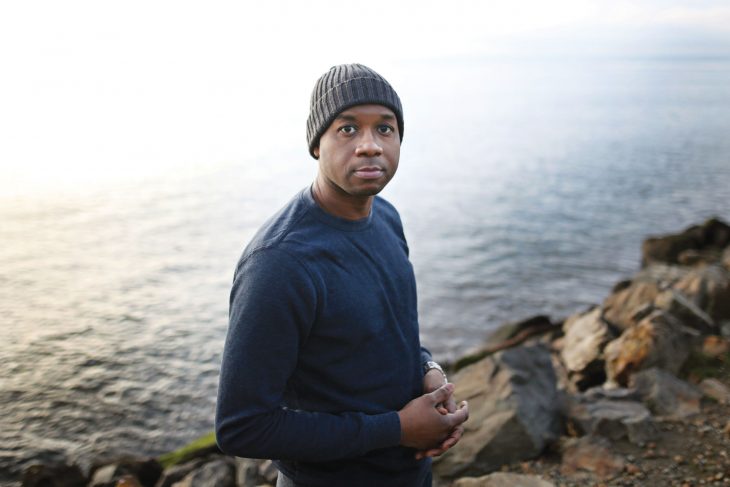 “This is my favorite time of year. I love the grays,” Jazz Brown says on a November evening. “Winter is like a meditation of the Earth; it just lets go of all its possessions of nature. It’s a hibernation of the Earth. You have to respect the cycle.” Brown’s given name is Jasmine, like the flower.

In the last year, Brown’s presence in Seattle has been vibrant and timely. His paintings, small in scale, address themes of chaos and balance on canvas or wood panel. His abstract works are a maze of lines and blocks in unusual shapes and his text-based pieces splay sentences or single words into phonetically stacked poetic reconstructions that assume layers of narrative—such as “why / oh / ewe” or “br / eat / he.” In the past year, Brown’s work has appeared at ArtXChange Gallery, Bridge Productions (with Ben Gannon as guest curator), King Street Station (with ONYX Fine Arts Collective), Out of Sight, Joe Bar and Feast Arts Center in Tacoma.

“It was a dream as a child, to make art,” says Brown. “Of course, back then I was drawing things like Transformers and dinosaurs—basic child stuff. Later I got sidetracked by life. I was told it wasn’t a viable living and gave up on it.”

The Savannah, Ga., native moved to Seattle in 2004 on a quest to make home in a vegan-friendly city. He spent his early adult life working non-art jobs while slowly collecting art on the side, before he started making his own art again 10 years ago. “One day I spent about 200 bucks on art supplies—canvas, paint, brushes,” he says. “I told myself if I didn’t paint, I’d wasted 200 bucks.”

That self-applied pressure worked and he painted—leaning into abstraction and geometric forms in both bright and muted colors. An autodidact, Brown found supportive colleagues in communities like ONYX and Seattle People of Color Salon.

Brown was born and raised a Jehovah’s Witness. His departure to abstraction has something to do with his breakage from the rigidity of that upbringing. The narrative of his current work—whether pitting text fragments against meaning or balancing compositions of colliding shapes into geometrical labyrinths—is infused with neither religion nor nihilism, but something in between. Talk to him for any length of time and the terms “void” and “balance” surface with regularity. Brown’s wisdom is wrought in solitude, brushstroke upon quiet brushstroke.

Characters float in space like that, equally loaded and weightless, breadcrumbs leading to a stillness.