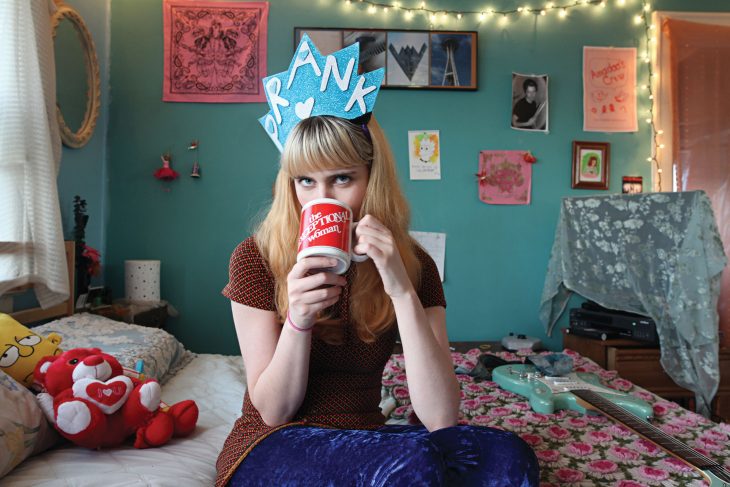 Lisa Prank started as a tag Robin Edwards wrote on bathroom stalls while on tour with other bands. A pun on the cosmic technicolor sticker franchise of Lisa Frank, it seemed an obvious choice for her stage name once she began playing solo shows in 2013. Armed with an electric guitar and her Roland MC-505 drum machine, she’s spent the past four years as a one-woman band, spinning her unique brand of “babysitter punk” across the Pacific Northwest and beyond.

“I describe it as three-, sometimes four-chord songs about feelings,” Edwards says. Her tunes are the perfect combination of catchy, kitschy and candid—always honest and never more than three minutes long. On stage she dons girly dresses and gaudy rainbow getups, with a sky-high ponytail and a cartoonish crown inspired by Courtney Love’s immortal tiara. She cites Dolly Parton, Shania Twain, Lucinda Williams and Joni Mitchell among her inspirations.

“I think of Lisa Prank sort of as an exaggeration of me as I am,” she says. “I wear bright colors in my regular life, but Lisa Prank is a little bit brighter.” The stage name also allows more vulnerability in her songs. Though her music treads the familiar territory of love and heartbreak, her lyrics are refreshingly funny and sincere. Amid the bubbly guitar distortion of “Why Can’t We Just Dance?” she quips, “I don’t want that much from you, just good feelings and a song or two.”

Edwards got her start in music playing oboe and saxophone in school bands, and in her late teens she began singing and playing guitar. Since relocating to Seattle in 2014, she has released two solo records under the Lisa Prank moniker: 2014’s EP Crush on the World and 2016’s full-length Adult Teen. For her next record, she plans to expand to a full band, and she’s also writing scripts for a Lisa Prank TV show.

“It’s like a Pee-wee’s Playhouse-meets-Clarissa Explains It All kind of variety show starring me, Lisa Prank, in my bedroom,” she says. In her spare time she also does celebrity watercolor paintings and plays in the Seattle pop-punk supergroup Who is She? with Bree McKenna of Tacocat and Julia Shapiro of Chastity Belt.

Edwards says her dream Lisa Prank gig is to open for Dolly Parton or to play a prom in a teen movie—but until then, she’s happy to keep writing love songs in her bedroom.

“The best songs are those ones that come out all at once,” she says. “It’s like in a fantasy book where the door to the magical world opens up all of a sudden. You never know when it’s going to appear—and when it does, you have to walk through it.”