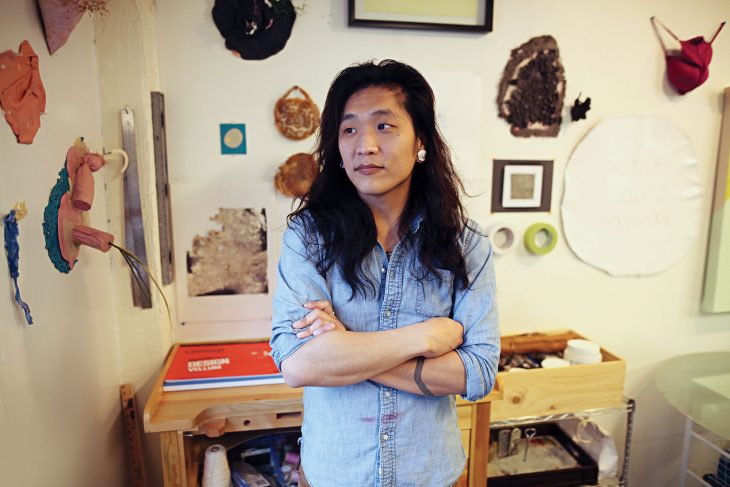 During First Thursday art walks in Pioneer Square, one can invariably find artist-curator Philippe Hyojung Kim on the threshold of Specialist gallery, his long hair loose or tied up in a bun, his demeanor solemn. “The white cube daunts me,” he says. “I’m standing there to get used to it.”

Since graduating with an MFA in painting from Central Washington University and moving to Seattle a year ago, Kim has sewn himself into the city’s art fabric. He’s one of five curators at Specialist, a new artist-run gallery in the XYZ project space in Pioneer Square. He’s also on this year’s curatorial team of the artist-run gallery SOIL and teaches art and design at Seattle Central.

“A lot of people think they aren’t part of the conversation,” Kim says of his students during a visit to his SoDo studio. “They are—they just need to open their eyes. Just look at all the weird stuff out there!”

“Weird” could describe Kim’s own painterly sculptures—oblong, sewn-together and omelet-like slabs of dried-up paint, which he makes by oozing discarded, secondhand or “mis-tinted” paints onto a round plastic slab and letting them dry. “Their forms are malleable, just like identity.”

Born in Korea and raised in Shenyang, a large industrial Chinese city, he began drawing and scrapbooking at age 8. “I always saw the world a little differently. Queerly, if you will.” The teenager came out twice—once to the Jewish family that adopted him into their Nashville, Tenn., household when Kim was 15, and a second time to his biological parents, who rejected him.

He has lived everywhere, he says, “but mostly in a state of flux.” Before finding some footing, there were bouts of self-medication and rehab. Art was a way out. This summer, he added another layer to his identities: a U.S. Green Card.

Some might expect only serious work could emerge from these experiences. “No,” he counters. “There’s anxiety and catharsis in my work, but the final experience is fun.” He’s interested in the ethics and aesthetics of plastics, but it sounds more humorous when he describes it. “Plastic is like an unwanted kid: We started mass-producing it 50–60 years ago and now we don’t know what to do with it.”

With Specialist, he plans to widen the gallery’s focus by bringing in artists from across the country and programming new-media work at the gallery’s new “SPEC.” project space. When I ask whether he—like the novel where his online nickname Philippe Pirrip comes from—holds great expectations of maybe a big museum or gallery show, he deadpans: “Sure,” then goes silent.

“I want to keep making and showing work, keep learning from other artists,” he adds finally. “I hope I’m not solidifying like my paint. I want to be oozy.”