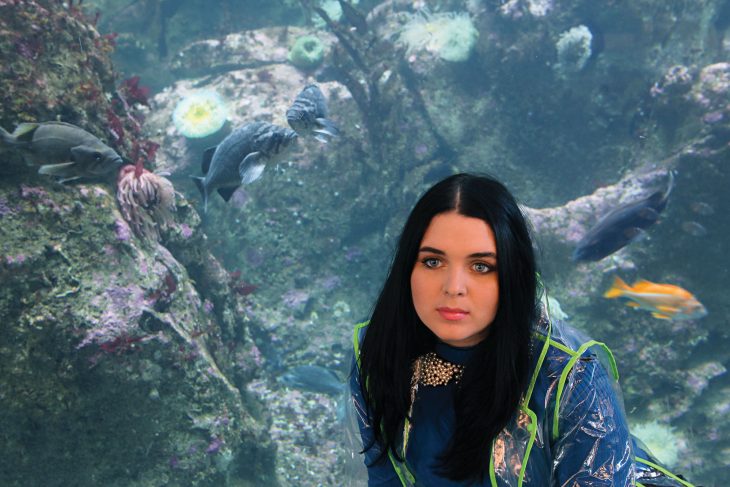 The most interesting aspect of a built environment is the part you can’t see, says Abby Dougherty, aka Neon Saltwater. For her, the magic of a space doesn’t come from designer furniture or one-of-a-kind wallpaper—it comes from the ambiance or emotional pull of a room.

“Rooms capture emotions and moods and hold on to them long after people leave. I’m drawn to that intense energy—like the feeling you get when you experience déjà vu,” Dougherty says in the upstairs office of Glass Box, the gallery where she works, and the site of her large-scale solo show last July. UNVIRTUAL featured immersive, 3D installations—bright green tables, Dayglo-splattered walls, neon pink counters—that brought to life Dougherty’s signature dreamy renderings.

Growing up in Portland, Dougherty was an artsy kid. Her parents put her in art classes and camps, from painting and drawing to sewing, but Dougherty also spent hours every month rearranging her bedroom. “I drove my parents crazy,” she says.

In 2008 Dougherty moved Seattle to attend Cornish College of the Arts, where she studied interior design and honed the digital rendering skills that would become the basis of her Virtual Dreamscapes. A series featuring rooms steeped in ’80s and ’90s aesthetics, the Dreamscapes are awash in neon colors, bold patterns, swimming pools and palm trees—and are devoid of people. “Characters introduce story, and this is all about the feelings that come from the spaces,” she says.

Dougherty started creating the Dreamscapes in 2015, posting them on Tumblr as Neon Saltwater, a moniker born from a playlist of vaporwave music she once made. In January 2016, she built her first dreamscape installation at The Good Mod, a furniture showroom in Portland, and in 2017 entered the Northwest’s contemporary art scene. In addition to Glass Box, Dougherty’s work has appeared at MoPOP, Pioneer Square’s Velouria Boutique and the Victoria and Albert Museum in London, among others.

Her tropical blue-and-green hotel room was a highly Instagrammed feature of Out of Sight during Seattle Art Fair last year. A bed and cloud-painted vanity emitted a part-eerie, part-pop glow, while a Tiffany-blue floor was painted with giant white tropical foliage. Part of the intrigue was in the careful details: a hair dryer on the vanity, a corded phone on the nightstand.

This year Dougherty will exhibit new work at Mount Analogue and is currently collaborating on immersive interiors with Jeff Jacobson, aka Weirdocult. Dubbing themselves New Air, the duo plan to integrate hyperrealist murals into interior design schemes.

“I have a drive to make spaces no one has ever seen before,” Dougherty says.