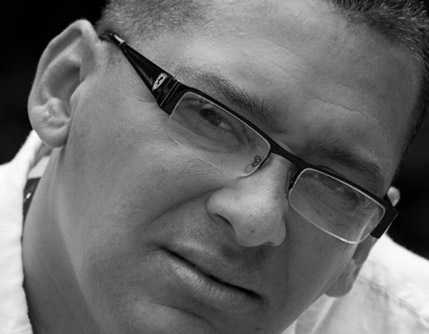 Jorge Enrique González Pacheco has amassed such a sizable list of titles—poet, lecturer, teacher, filmmaker, co-founder of the Seattle Latino Film Festival, and now Mayor’s Arts Award recipient—that it’s invited concern from loved ones for his wellbeing. “My friends ask me when I get time to sleep. I don’t really have an answer for that,” he says with a laugh.

Pacheco’s unflagging energy has seen him through a creative and spiritual journey that began with personal loss. Born in the Marianao District of Havana, Cuba, González Pacheco experienced what he describes as “a typical childhood,” enjoying a close, supportive relationship with his mother until her death when he was 12 years old. “She was my best friend,” he says. “Losing her was devastating, but writing poetry was a way for me to talk to my mother after she was gone.”

He continued writing poetry throughout his teens. As he developed creatively, his relationship with his father became increasingly contentious. The senior González served in the Cuban military working directly with Raul Castro and had little patience for his creatively inclined, ever-questioning son. “He was so close to all of this power,” González Pacheco says, “and he was a strict man.” González Pacheco admits that his own rebellious streak didn’t help. “My father was a single parent, dealing with me. I was a little complicated, and a troublemaker, up until the age of 18.”

González Pacheco found his focus at the University of Havana, where he studied for his Bachelor’s Degree in Latin American Literature by day and worked in a food factory by night. Tuition was free (“It’s one of the few things you can applaud about a dictatorship,” he says), and in five years he earned his degree—though he felt limited by the state-dictated curriculum. “With Cuban education, you have censorship. You come out of the system knowing a lot, but not enough.” With the encouragement of one of his University of Havana professors, González Pacheco journeyed to Spain to attain his Master’s Degree in Hispanic Literature from Complutense University of Madrid.

During his tenure in Madrid González Pacheco met Octavio Paz at a lecture. The Nobel Prize-winning poet was stirred by the young student’s reading of a poem dedicated to him. “He said that, even setting aside the fact that I’d dedicated this poem to him, my work was good enough to be published,” González Pacheco recalls. Soon after, a friend submitted some of his poems to Alaluz, a prominent Latin American literature magazine. One was published—and González Pacheco’s career as a published writer was on its way.

“I don’t feel like my poetry is connected with anything that comes from the 21st century,” he says. He cites the mysticism of Cuban poets of the 1950s and Spain’s Generation of ’27, a collective of Spanish poets whose work attempted to bridge the gap between Spanish popular culture and folklore in the 1920s, as formative influences. His evocative style avoids overt politicizing, employing surrealism and metaphor to touch on universal themes of love and death. It’s an aesthetic informed by an eye for beauty and a distinctively Cuban sense of place. González Pacheco writes poetry almost entirely in Spanish: “It’s a beautiful language, and it allows me to do so much with metaphor.”

Shortly after his studies, he became involved with the Cuban Film Institute, where he became an assistant director on various projects and learned about film production in depth. “Fidel Castro thought a lot of the Cuban Film Institute,” he says. “It was one of the few cultural institutions where an artist could find a little bit more freedom to create and express themselves.”

But despite all of the acclaim for his writing and the knowledge of film he’d gained from his work at the CFI, life beyond Cuba beckoned. In 2003, González Pacheco was invited to the International Book Fair at Miami-Dade College on the strength of a recently published anthology of poetry he’d compiled. While there, he decided to make the United States his home. “My family in Florida encouraged me to stay. It’s a place that has a special love for Cubans.”

He move to Seattle in 2006, partly to remove himself from the comfort zone of Cuban-centric Miami. “Miami is a city of Latin American countries in the United States. I wanted to learn more about what America is like inside, and I wanted to improve my English,” he says. He was also eager to settle in a city with a thriving arts and culture scene. The life he’s developed here—lecturing, teaching and writing—would be impossible in Florida, he says.

Nine years ago, González Pacheco co-founded the Seattle Latino Film Festival with the intent of spreading Latino culture to a broad audience. “There are many Latino organizations in Seattle that are focused on social issues but not as many devoted to art,” he says. The Festival has blossomed from a single weekend to an eight-day-long affair replete with red carpet events featuring prominent celebrity guests and some 70 films from 10 different countries, including Mexico, Cuba and Brazil. The Festival, González Pacheco says, draws a lot of people outside of the Latinx community as well as a significant number of younger, second-generation Latinx folks. “Younger members of the Latin American community recognize the importance of the Festival and what it represents for them,” he says.

True to form, Jorge Enrique González Pacheco shows no sign of slowing down. His latest collection of poems should be published later this year, and he’s flying to Spain soon to interview one of iconic singer Celia Cruz’s oldest contemporaries for a documentary he’s producing. For now, González Pacheco is ensconced in work on the Seattle Latino Film Festival’s 2018 iteration, which opens Oct. 5. The fundraising and logistic challenges of putting on this very large event have done nothing to dampen his enthusiasm. “We are a cultural organization that’s here to add a special touch to Seattle,” he says of the SLFF. “I think the festival helps make this city even more cosmopolitan and beautiful.”