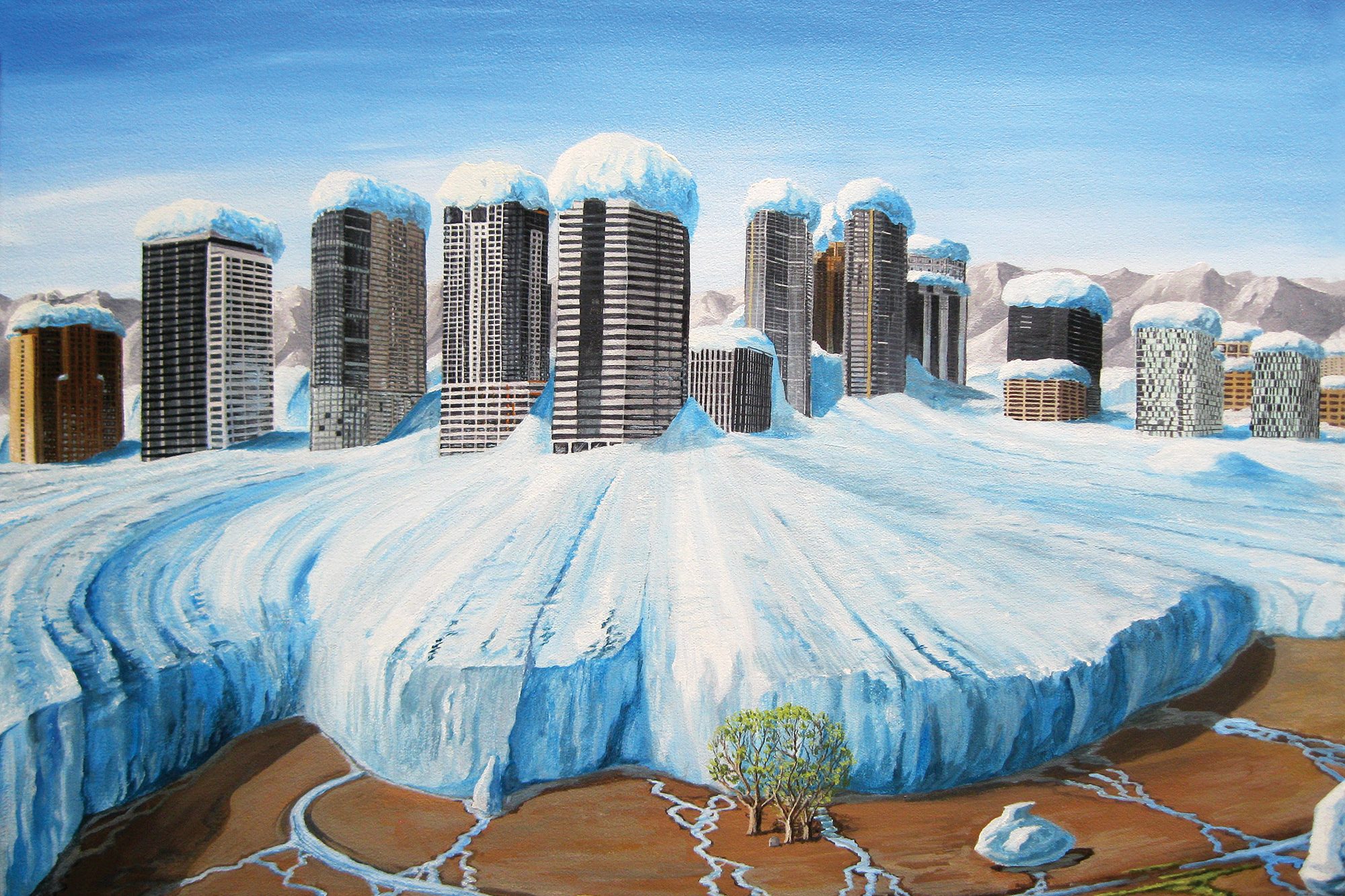 It’s another regular afternoon in downtown Bellevue in the year 2028. At the urban crossroads that is Compass Plaza, office towers of glass and steel rise hundreds of feet into the air, faceless headquarters of global telecom companies, blockbuster video game studios, cloud-computing powerhouses. Seagull-sized drones beeline between buildings to deliver boxed lunches to corner-suite executives and platoons of software engineers crunching on a 24-hour production cycle. An electric jump jet lifts from a rooftop and beams silently west. Cock your head just right and you can almost hear the flow of information technology, a spectral gush of ones and zeros, signals and symbols, humming through sheer blue sky.

The buzz below, at street level, is more apparent; in fact it’s enveloping. And of a different sort: Down here Compass Plaza is a well-tended jungle of human-centric art and design.

Colorful murals on the surrounding walls depict the area’s Native American and Japanese-immigrant history, including a period of forced relocation and dispossession. Derelict movie marquees—years ago this place was a multiplex—are inscribed with wry poetry in English, Spanish, Lushootseed and Cantonese. Architectural waypoints and a holographic smartphone app guide pedestrians along the Grand Connection, a 1.5-mile path that blazes through downtown, connecting the green spaces on Lake Washington to the museums and retail centers of the city core to residential neighborhoods on Lake Sammamish. Working people come and go or linger in chatty packs while tourists, children and gawkers soak up the plaza’s flurry of activity.

Industry high above, culture in the canyons. All is flourishing—a fine-tuned ecosystem more than a decade in the making.

This vision of the future—or something like it—is the motivating force behind the Grand Connection, a very real pedestrian thoroughfare in downtown Bellevue that’s part of the growing city’s very real forward march. The Grand Connection was officially put in motion by the City Council in 2016 with the goal of integrating community-based artworks into Bellevue’s social fabric as a cultural and economic driver. It will unfold in phases over the next several years, the master plan adapting to the wants and needs of a community in flux. This month the first piece falls into place.

It begins with the revamped opening of Bellwether, a multi-venue exhibition that runs the entire month of September and centers on an extra-activated 10-day span from Sept. 14–23. Bellwether’s 14th edition is not the usual public art showcase that it’s been since launching in 1992. For the first time, the Bellevue Arts Commission called in an outside artist to curate the show, providing a prodigious budget to source original artwork and expand the exhibition’s purview beyond traditional sculpture—its focus in the past—to include pretty much every medium available to the modern, cross-disciplinary artist. Also for the first time, Bellwether extends into Bellevue Arts Museum and takes over the entire second floor, which is open free to the public during the 10-day core fest. Public art also overtakes Bellevue’s spacious Downtown Park and Compass Plaza, linked by the initial phase of the Grand Connection.

Through an open call process in 2016, the Bellevue Arts Commission selected Seattle-based multimodal art trio SuttonBeresCuller to curate the entirety of Bellwether, from the 10-day outdoor extravaganza to the monthlong BAM exhibition. For their part, SBC has commissioned dozens of local, regional and national artists to create new works, all oriented around the theme of “connection.” Because the City Council is positioning Bellwether as a prelude to the public art infusion that the Grand Connection will bring, SBC is also consulting—alongside New York-based design firm Balmori Associates—on its long-term concepting and buildout.

It’s a lot. A lot of time, money, planning, ambition—of art commissioned, built and installed in the public realm. Of collaboration and compromise between business, City and artistic interests. Of fundamental change for the city of Bellevue. Ultimately, the Grand Connection is about more than public art installations—it’s about integrating a livable, sustainable approach to a downtown originally designed as a parking lot for a shopping mall in a city incorporated a short 65 years ago. It will remake and redefine Bellevue as we know it. Or more likely, as we don’t.

Heim is right. As a Seattleite of 10 years, I can count the number of times I’ve been to Bellevue on both hands. I’ve never recognized any particular there there, not the kind worth taking the time to visit. And as we sit outside City Hall (admittedly a rather impressive building, especially from the inside), I fail to notice much in the way of art intervention of any type. Heim arrived from a similar job in Redmond two years ago to help change that.

He relates a wealth of eye-opening facts that run counter to the popular perception of Bellevue: Every day some 50,000 people show up from across the Puget Sound region to work in downtown Bellevue. In that regard, he says, the city functions more like Seattle’s downtown than Seattle’s bedroom. In 2015, Bellevue became a minority-majority city, with 51 percent of its population identifying as non-white. More than 40 percent of Bellevue’s 142,000 residents, 14,000 of whom live downtown, are foreign-born.

“Forty-two percent of residents speak a language other than English at home, so this notion that we’re this white-bread suburb is contrary to the fact that we’re a major commercial center full of international immigrants. In fact, we’re the second largest commercial center in Washington state. So we’re not nearly as big as Seattle, but we’re its counterweight.” Heim describes downtown Bellevue, where the average age is 34 and the foreign-born population over 47 percent, as “South Lake Union outside of South Lake Union.”

“What does that mean for the arts? How does the city respond to the cultural needs in that kind of environment? It makes sense of what we’re doing with Bellwether: We need to appeal to an international audience. We have to figure out how to support artists who can reflect back the various experiences that people are now having. Sculpture’s a great medium for certain things, but not for everything.” He cites an online survey, plus stakeholder interviews by SBC, conducted in preparation for the Grand Connection, querying 350 downtown Bellevue residents on their current cultural habits as well as their aspirations for the city’s art programming. “Overall,” Heim says, “what people want are experiences.”

The three-artist team known as SuttonBeresCuller has been effing the ineffable since the year 2000. Comprising John Sutton, Ben Beres and Zac Culler, the trio creates art experiences across the globe, often on commission by impressive institutions. Whether enshrined in museums, parading through festivals or set loose into the urban landscape, their work is equal parts absurdist spectacle, interactive theater and cultural mirror. SBC declares itself dedicated to a form of public art that’s accessible to the uninitiated but also brims with powerful ideas—playful riffs on consumerism, entertainment, memory, family and the artist-audience dynamic. That aesthetic is evident among the 65 artists they commissioned to contribute to Bellwether.

The trio first met in the sculpture program at Cornish College of the Arts, but they long ago abandoned traditional sculpture as a viable medium, instead spending the last 18 years creating meticulous but ephemeral installations that echo specific archetypes and locales that exist in the actual world as much as the collective imagination.

A tiny tropical island floating in Lake Washington, populated by three shipwrecked castaways and anchored within eyeshot of the Northwest’s busiest commuter bridge. A miniature park mounted on a flatbed trailer and towed from one Seattle neighborhood to another. An exact reproduction of a Chinese American restaurant built inside a gallery. A series of Sears family portraits in various states of costume and/or intoxication, actually taken at Sears over a decade-long span. A hydraulic-powered, candy-colored carnival concession stand that pops up like a three-story jack-in-the-box.

The trio has installed and performed around the world, received coveted awards such as Creative Capital, spoken at academic panels. For the last decade, they’ve been transforming a former gas station in Georgetown into a pocket park and art-focused community center. Now they incorporate the complexities of planning, permitting, construction and interfacing with communities in their practice—approaching project management as art. All of this deep and diverse professional experience, Beres believes, contributed to the City’s choice to award SBC the Bellwether commission.

“We’ve slowly but steadily accrued a lot of knowledge in the area of public art and that kind of admin, and that’s why they hired us for the Grand Connection,” he says. “You have to have an artist as part of these teams because a regular city administrator isn’t going to have the same vision.”

Beres is simultaneously bullish and self-deprecating about the group’s bona fides, seemingly surprised by their long list of accomplishments and certified art-world legitimacy. He mentions “a touch of impostor syndrome.” During SBC’s initial talks with City officials, he recalls, “they said something to the effect of, ‘You’re the least qualified but most interesting,” which he’ll take every time. More than anything, he’s stoked to disburse Bellwether’s substantial budget to worthy artists.

This is the self-aware sense of humor that infuses SBC’s best work, an openness to both the total absurdity and foregone significance of the role art plays in daily life. That impish approach to Bellwether’s open-ended theme of connection gave the contributing artists plenty to work with.

“One of the challenges and benefits of all public art is it allows you focus on commonality,” says Kamari Bright, a poet whose work will appear in four different languages on the Compass Plaza marquees. “The goal is for people to identify with it. We have so much in common to surface while still including everyone.” She’s interested in seeing how locals interact with her work. “I’m still not all the way sure how Bellevue operates.

Elisheba Johnson and Kristin Ramirez observed the scene directly to develop their project. Their interactive performance piece staged at Compass Plaza involves people writing affirmations on slips of paper, attaching them to balloons and handing them to strangers.

“People go from the mall to the transit center, not interacting with each other; it’s a rote act they do every day,” Johnson says. “The theme of Bellwether is connection, so how do we get people to use art to have a genuine connection? We thought about passing notes in class in school, this special moment you share with someone with this simple act.”

They declared their daylong trial run in July a total success.

“People got really into it,” Ramirez says. “They wrote heartfelt things: ‘Hey stranger, don’t give up,’ ‘Your ancestors are proud of you.’ People rose to the occasion.”

Ten days of similar interventions will fill Downtown Park—a massive, underutilized oasis hidden in plain sight—including a live interactive weaving by Mandy Greer, a daily dragged painting by Margie Livingston and performance art by San Francisco-based Guillermo Gómez-Peña. At Compass Plaza: live music by Ben von Wildenhaus, Lydia Ramsey and more. Inside BAM: works by Kelly Bjork, Jed Dunkerley, Joey Veltkamp and a massive new mural by Ari Glass, which will remain in place after the exhibition ends. As of press time, SBC is still adding artists to the lineup. All performances and installations are free to the public, all intended to transform Bellevue into a more agreeable, more unique place to live.

Bellwether and the Grand Connection are an intentional turn toward art to provide an architectural blueprint for a city that knows it needs some soul, and it arrives just in time. The Bellevue of today is already on its way to becoming the Bellevue of tomorrow.