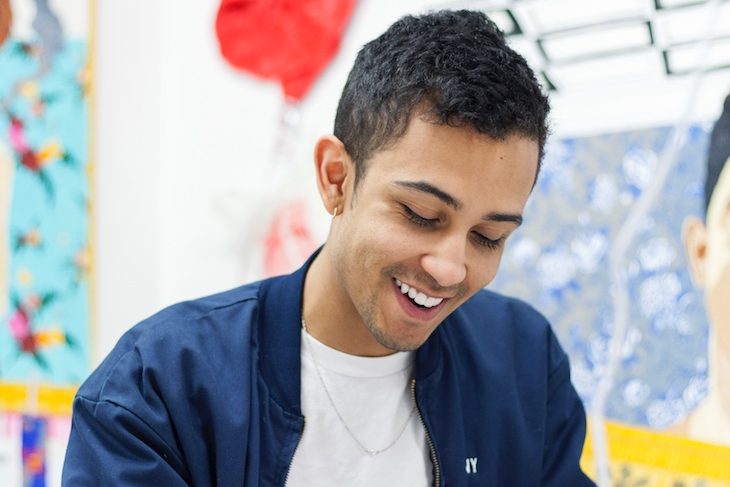 Anthony White is obsessed with the stuff that surrounds us: luxury shopping bags, iPhone screens, nail polish, trash. During his walks from the International District where he paints and sculpts to the Capitol Hill and Pioneer Square venues where he organizes the rotating group exhibition While Supplies Last, White looks out for candy wrappers or scratched lottery tickets. He keeps his finds in a box in his studio.

He pulls a big cardboard box from under his workbench and rifles through wrappers, cigarette boxes, beer cans and to-go cups. He holds up a Wendy’s wrapper and grins. “American consumerism lives at the top of my brain, always,” he says.

In White’s “WELCOME TO MY LAST SUPPER,” a work on panel shown in Greg Kucera’s booth during the recent 2018 Seattle Art Fair, a pink G-string reading PAPI lays amid the paraphernalia of American consumerism: a broken Blackberry, OPI nail polish, beer cans, a toy gun and Pokémon cards. Nearby hung another still life and two mirror selfies, young, naked torsos framed in baroque, gold-leafed mirrors. During the Fair’s opening night, visitors craned their necks to inspect the works’ surface, comprised of angel hair-thin strings of plastic created with a device that heats and melts plastic at 200 degrees. “Basically, a hot glue gun I fill with plastic,” White explains.

In June White graduated with a BFA from Cornish College of the Arts, selling all of the paintings and sculptures in his BFA show. The four works he showed at the Art Fair sold before opening night was over. Like a self-fulfilling prophecy, the works at his second solo show, “TIER 2: SOLD OUT” at GLASSBOX gallery, running until Sept. 15, had also sold before Art Fair weekend was over.

All this meant that White, who usually sleeps four or five hours per night and works every day, had to make more work. Specifically, he’s making work for Bellwether, Bellevue’s annual arts festival opening this Friday, Aug. 31. On the table in his studio, he’s created a display of crumpled Louis Vuitton, Tiffany & Co, Gucci and Balenciaga shopping bags meticulously covered in plastic by tracing their colors, lines and logos with a pen. Recently he Instagrammed a close-up of one of the “sculptures”—a floral Gucci bag—with its title as a caption: “NOT RARE, JUST LIMITED EDITION EXCLUSIVE”

Luxury brands churn out limited edition after limited edition, producing an abundance of expensive and exclusive things in defiance of their own claims of scarcity. White’s work dances with this apparent contradiction. “We hold these luxury goods of high-status wealth at the top of importance,” he says. “They’re almost always exclusive, accessible only by a person in a certain tier.”

He traces his interest in social and economic class to his “lack of social clout” growing up. There were no nice clothes, no nice cars. Just the hot rods and custom low-riders his dad was working on, first in Santa Maria, Calif., a small town outside of Santa Barbara, and later in Prescott Valley, Ariz. The town stretched wide, but to White it felt small and quiet. He didn’t fit in. “People were very conservative. Being a physically obvious minority was always on my mind. It felt like no matter what I did, I had to be careful.”

Home provided a supportive space. Always drawing, he asked for a tattoo gun and his parents gifted him one for his 15th birthday. His friends were treated to “really, really shitty tattoos” but mostly he practiced on his father, his biggest literal and figurative support.

“He let me go free-scale, free-range tattoo on him,” White says. “He never cried, never showed that I was hurting him, even though I was going over the same area a lot. He let me really learn on him.”

White forewent a career in tattoo arts to study film and visual art. Still, he says the plastic glue gun he uses nowadays resembles a tattoo machine. The technique, which requires holding a position for hours at a time, is strenuous on the body. His patience and steady hand come in handy. “It’s not as meditative as it is stressful,” he says, “but I enjoy it.”

Out of all materials, plastic is perhaps the most synonymous with cheap, throwaway, mass-production. Covering expensive things with a cheap material inevitably leaks into a discussion about labor and value, highbrow and lowbrow. “Plastic is considered trash. I’m re-contextualizing the material,” White says. His process is adjacent to that of an archeologist, he says, preserving vessels that once held expensive things from Louis Vuitton and functioned as signifiers of wealth, or candy wrappers and other “low-status” stuff that he calls “lowly accouterments.”

In his studio, two half-moon panels lean against the wall. Together they represent a still life from a recent summer weekend: vodka, plastic cups, an iPhone with a broken screen, a paper bag from Dick’s and a glass pipe all vie for sunlight. The finished circular panel will be on view next January when White’s first solo show opens at Greg Kucera Gallery, which now represents him.

“Anthony’s work isn’t derivative of other people’s work,” Kucera says. “It wholly sits on its own. Anthony plays with the tradition of great still life and vanitas painters. Back then, a painted melon was not just a melon, but a signifier of personal wealth, a way of showing you could afford fruit that was not in season. Here, it’s iPhones, grooming products and even cough syrup poured into a glass.”

His portraits follow a great lineage as well, according to Kucera. “When people wanted their portrait painted, they wanted to feel grand. Whether you’re Frans Hals or Rubens, you’re making your clients grander.”

White bases his portraits off selfies he gets from friends or crowdsources through Instagram. He transfers their semi-naked figures onto the panel just the way they send it to him, but everything else changes: He inserts luxurious Renaissance-era wallpapers or fancy Victorian mirrors. “It’s a way to elevate their existence, immortalize them in a way they probably haven’t been or wouldn’t ever be,” he says. “Like me, most people in my paintings don’t come from fancy environments.”

In describing these contemporaries White isn’t only referring to an absence of wealth, he’s referring to the young, queer men he’s found missing from art history. “I wasn’t seeing males like me highlighted while they feel comfortable and sexy.”

White elevates others in his everyday life as well. With While Supplies Last, he hopes to make art more accessible. The rotating show started early this year as a one-off pop-up show in collaboration with Dawna Holloway from Studio e. After she gave White a solo exhibit, he proposed a show with affordable work by artists he admires or discovered through Instagram. Today, the list of artists is 250 deep and counting, and all works sell for $30.

“Anthony is ambitious,” Holloway says. “That word is often used in a negative way, but Anthony’s ambitious for himself and for everyone else. It’s not self-serving. It’s refreshing.”

The next While Supplies Last, Sept. 28 at Gift Shop Gallery, will be bigger than ever. “We hope to get a new demographic of people, make it more approachable than it already is,” White says. “My work and this project are two halves of the same thing: I try to remove the construct of people being structured based on how much money they have, or what kind of lifestyle they live.”