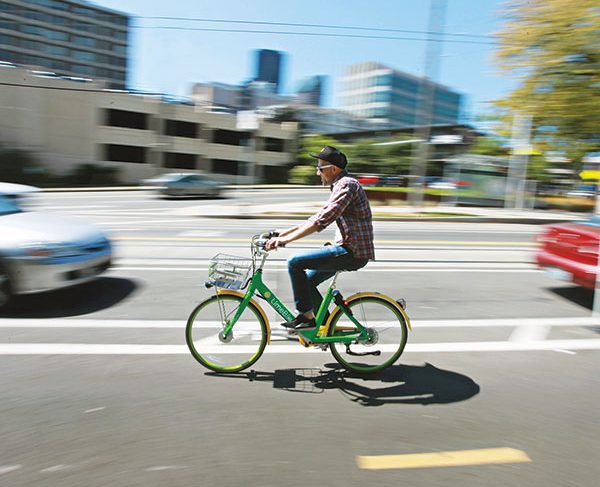 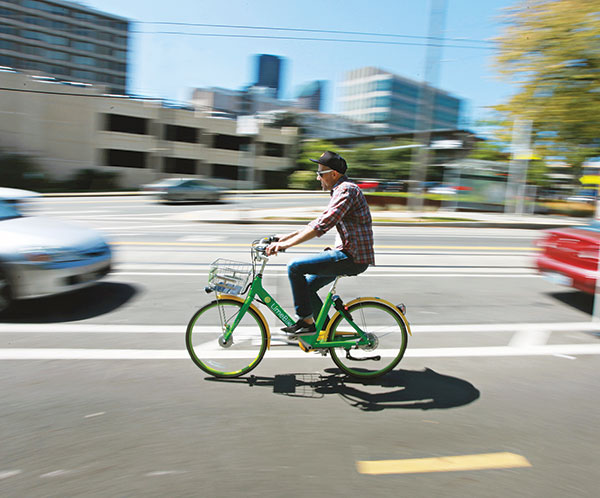 When I was 17 I went with the welders at my metal fabrication job to the Dead Baby Downhill, thrown annually by the Dead Baby Bike Club. The entire neighborhood of Georgetown was swarming with fantastical homemade bicycles—there were carnival rides made of bikes, bike jumps, bike jousting, many of the bikes made of parts of the same vintage as the ’65 Mustang in an Aurora used car lot I’d been coveting for months.

I knew then that I absolutely needed a bike, and that I don’t care about cars, I care about design. Specifically, I care about objects that are both beautiful and functional, and only the latter is available in contemporary cars unless you have the money to drop on something like a Tesla. So I found myself a ’57 Schwinn Flying Star for $90 and saved my money for college.

I’ve been riding bikes as my primary means of transportation since. Yes, there are hills, and rain, but you don’t notice the hills after a month or two and vintage rain gear makes you look like you’re from space. Bikes are simple to work on—if they break you can fix them yourself. Bikes have no emissions, generally cost only a few hundred dollars to maintain per year, don’t require insurance and, as the Grateful Dead’s Bob Weir says, “Bicycles are almost as good as guitars for meeting girls.”

If you live in Seattle, I doubt any of these perks are news to you. So why is America’s Amsterdam still choked with car traffic?

If hills are a deterrent, perhaps you should try an electric bike. A number of shops have opened specializing in electric bikes: Electric and Folding Bikes Northwest in Ballard, Greenwood’s G&O Family Cyclery and Electric Lady in the Central District. 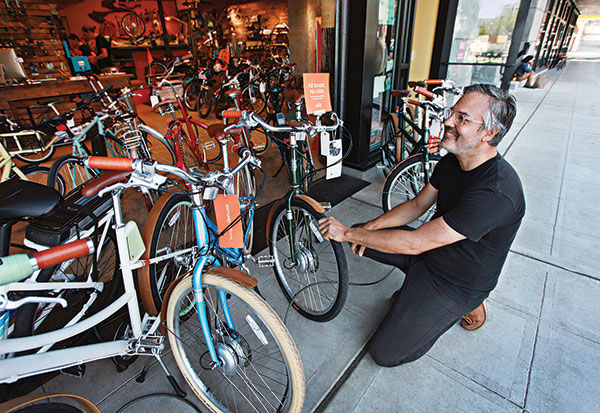 I stopped by Electric Lady to try a bike, as I’ve been going to owner Alex Kostelnik’s other Central District bike shop, 20/20 Cycle, since my first Dead Baby Downhill. Their most popular brand is Faraday, whose bikes have stylish double top-tubes (that’s two bars across the top instead of one) and don’t really look like electric bikes at all. I tried a Faraday Cortland (priced at $3,499 new) and its electric assist kicked in smoothly as soon as I began to pedal. The assist was so seamless it was less like an exterior power source and more like suddenly having superhuman strength. I squealed as I rocketed up Union, a real motherfucker for most cyclists, as easily as if I was cruising downhill. The somewhat less fancy Cortland S goes for about $2,500.

I asked to try something in a lower price range, and was shown to one of 20/20’s gorgeous silver house-made bikes (called the Kalakala after the late Art Deco ferryboat) modified with a Bikeswift E-Bike kit ($1,000). The assist wasn’t as smooth, but the jolts of power are fun and the bike mounted hills as easily as the Faraday.

According to a 2012 survey by the Seattle Department of Transportation, the primary obstacle to cycling is not hills, but lack of access to a working bicycle. Perhaps you’ve noticed the neon green and orange bikes that appeared all over town a few weeks ago. Two new companies, Spin and LimeBike (and more to come) have instituted Car2Go-type bike share systems that allow people to locate nearby bikes with a phone app and ride them anywhere for $1 per 30 minutes.

I’d left my Schwinn in Georgetown for whiskey-related reasons and needed to pick it up, so I downloaded the LimeBike app. I found a few bikes near my Capitol Hill apartment, which appeared as lime wheel-shaped dots on a map. The first of these yielded no bike. When I did find one, I scanned the QR code on the fender with the app and it unlocked, chirping an endearing robot greeting.

I was surprised when my feet spun on the pedals—I’ve never owned a bike with gears, and this was in a very low one. LimeBikes have instructions on anything that might require mechanical adjustment, so it didn’t take long to figure out. I put my bag in its basket (which can accommodate up to 15 lb.) and had a pleasant ride to Georgetown. I parked it next to another LimeBike on the sidewalk and locked it, which triggered a farewell chirp. You can find or leave a bike share bike nearly anywhere in town, but check out Seattle Bike Blog’s specific guide to leaving them visible but out of the way.

I plan to keep my LimeBike app because sometimes I wake up to a flat tire there’s no time to fix before work, and I’d much rather hop on a $1 bike than pay $20 for a Lyft. There’s never been an easier time to ride a bike in Seattle.