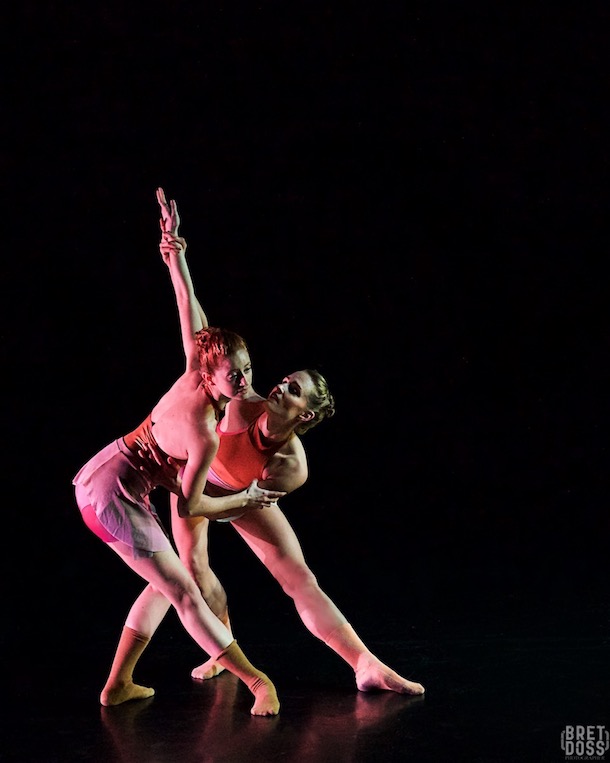 I hesitate to call Coriolis a contemporary ballet company, because they consider themselves post-disciplinary, but on practical level their new show, Transit of Metis, has a lot of ballet in it. And here’s a secret: if you like ballet, you can get up close and personal with Coriolis’ fantastic technical dancers at the intimate Erickson theatre for a fraction of a McCaw Hall ticket price.

Expect the extended legs and delicate precision quintessential to ballet, interrupted by evocative gestures like peeking out from behind a cupped palm. Graceful, airy movement mixes effortlessly with grounded floor work—the dancers seem just as comfortable balanced in a suspended arabesque as they do tumbling creature-like across the floor. Partnered flips and contemporary lifts add an acrobatic element, while liquid spines add emotional nuance. Vocalist Sarah Davis and violinist Julia Gish-Salerno even join the dancers for a few sections of fantastic live music. Transit of Metis is the creative vision of Natascha Greenwalt, one of Coriolis’ co-directors along with Christin Call, and they both perform in the work along with seven other dancers.

The evening tells the story of Metis, ancient Greek goddess of wisdom, whose eventual triumph over abuser Zeus serves as a metaphor for healing in the face of trauma. In a dramatic and rather literal opening, dancer Thomas Phelan malevolently plucks away bits and pieces of Call’s tulle costume, but soon the work spirals into an abstract emotional world, in which the dancers aren’t individual characters, but rather elements in a psychological journey. While the work’s mythic themes give Transit of Metis the same feeling of epic storytelling as the classical narrative ballets, the fluid nature of the characters is one way it deviates from the traditional mold.

The evening flows between ensemble dancing and pas de deux, but the partnerships are forces negotiating rather than romantic couplings. Pairs of dancers constantly revolve, limbs intertwined, describing the intricate puzzle that can emerge in an instant between any two cast members. The women partner the women just as much as the men do, another refreshing change from the classical. The female power in this work further distinguishes it: what a pleasure to see the ballet form tell the story of a woman finding joy and strength, rather than the usual tragic or nuptial conclusion.

The work does suffer from a few pitfalls. The mood shifts in response to the sometimes overbearing recorded music, rather than the internal logic of the dance. Greenwalt relies on costumes and program notes to carry the narrative, and yet there are inexplicable moments (Zeus has trapped Metis, so why are a man and a woman having a joyful duet right now?). These suggest missed opportunities, but generally don’t interfere with what Greenwalt has succeeded at: making work where technical ballet movement feels fully integrated into the language of the piece. It is telling the story, not just decorating it.

Coriolis has been quietly pushing the boundaries of the ballet medium in Seattle for nine years. While Transit of Metis isn’t exactly cutting edge, it’s also refreshingly earnest. There’s no attempt to make ballet more edgy or trendy, and the dancers are not only skilled, they perform like it’s genuinely important for each of them to tell this story—perhaps a result of Greenwalt’s creation of the work with the company members over several years. Coriolis’ egalitarian, female-forward sensibility is no coincidence, but the fruit of collaborative female leadership, and that is radical in the often male-led, hierarchical ballet world. If you love ballet, go to Coriolis for the gorgeous dancing, stay to support independent women artists.