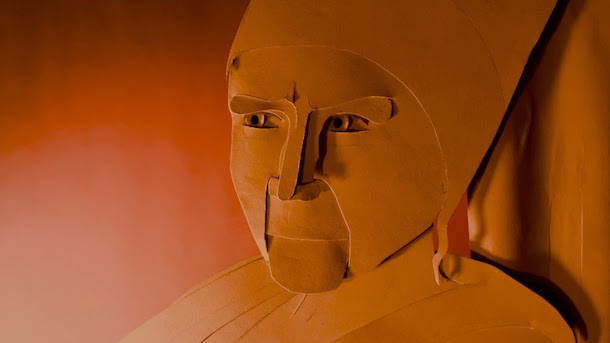 She’s used this approach to explore some profound and universal topics. They Look Right Through You, a 2013 short utilizing markers on glass, examines the deep emotional and spiritual bond between pets and their people. The 2014 short The Lost Mariner chronicles an Oliver Sacks psychological case study of memory loss with cut-outs; paints against a wall in Cal Anderson Park combined to tell the moving tale of a humpback whale’s rescue in 2012’s The Whale Story.

Martin returns to cut-out animation with her latest short Ginevra, showing at the Bellevue Arts Museum beginning June 30 alongside Cut Up/Cut Out, a multi-artist exhibit of decorative piercing and cutting works imported from California’s Bedford Gallery. This time, she uses paper cutouts to tell the story of a young Renaissance woman’s untimely demise and ascension to the afterworld, and the mother who watches her daughter metamorphose and literally fly away from the confines of the real world. Martin’s multilayered world alternately evokes classic fairy tales and near-science fiction flourishes in its handcrafted design.

Inspired by an unfinished Percy Bysshe Shelley poem posthumously published in 1824, Ginevra is Martin’s most visually complex, technically accomplished work yet. It’s a genuine mini-movie, with panoramic vistas, multiple camera angles, detailed character renderings, and many other decidedly cinematic elements—all cut by Martin from card stock and tracing paper with scissors and X-Acto knives. “With this film, I really tried to push the envelope in terms of camera moves, depth, and variety of shots and angles,” Martin says via email from her current home base of Rotterdam.

Ginevra was born from an idea by Max Rothman, a New York-based producer and founder of indie film production company Monticello Park Productions. For a series called Campfire Poetry Cinema, Rothman commissioned recordings of a number of poems, each read by an actor and backed with an original score, then presented those recordings to various filmmakers to create their own original shorts. Rothman was familiar with Martin’s work, and offered her the opportunity to choose one of the recorded poems as inspiration and sonic background for an animated short. “I focused on this [poem] because I was very moved and intrigued by the actress’s [Alexana Ryer’s] vocal performance on the recording,” she says. “I also liked the ambiguity and contrast between the futuristic-sounding music and the Renaissance design.”

Pre-production for the film was spread out over several months, but the actual shooting, including the creation of the cut-outs, took “about six crazy weeks, full time,” Martin says. An additional two weeks were devoted to building the multi-plane camera setup used to give Ginevra its distinctive, layered look. Martin estimates she used between 100 and 150 cut-outs, several of which will be exhibited with the film at BAM. Dragon Stop-Motion and After Effects editing software gave her a considerable technical assist, but in the end most of the labor is Martin’s. “Basically, I am still making work that is born with hand-made techniques, so the advancement of technology has not affected me as much as other filmmakers,” she says.

Since graduating in 2014 with a Master’s in Animation from The Academy of Art and Design St. Joost in the Netherlands, Martin, a former Seattleite, has been living and working in Rotterdam, periodically taking trips back to this corner of the world for exhibitions of her work. She also maintains solid Northwest connections thanks to the continued success of Haptic Animation Amplifier, the Northwest-focused animation history/resources/programming hub she started a few years back.

That said, the European art and animation scene dictates the need for a bi-continental existence. “I would love to move back [to Seattle] at some point,” she says, “but so far it’s been very useful to be based closer to all the animation film festivals in Europe, and to the exciting work that is being made here.”

The Ginevra exhibit opens alongside Cut Up/Cut Out at the Bellevue Arts Museum on Friday June 30, and runs until Oct. 22. Visit bellevuearts.org for more information.