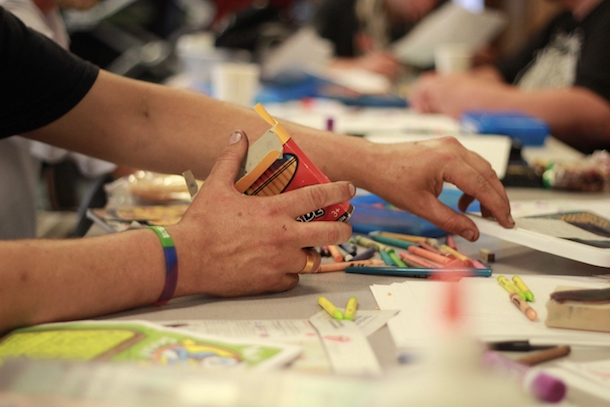 The sun is scorching in front of Union Gospel Mission in Pioneer Square. A couple of people are resting in the slivers of shadow beside the brick building, UGM’s men’s shelter. Inside, in a neon-lit, air-conditioned room, more than 30 people seek refuge from the heat and bustle of the streets. A dog curls around a smooching couple. Between stacked green cots, someone naps. People come and go, crack jokes, call each other from across the room. It’s loud.

In the middle of the room, seven undeterred people surround a long table strewn with crayons, scrap paper, paint and sandwiches. They are here for UGM’s weekly ‘Art From the Streets’ class, which includes art therapy and photography, and a monthly gallery showing open to the public during Pioneer Square Art Walk. Often there’s an artist in charge, but today is an open class; anyone can do whatever they want with the tools at their disposal. Art from the Streets, as part of UGM’s wider mission, hopes the arts can be a catalyst for healing and a valuable space for people to explore their artistic sides. Some 780 people participate in UGM’s art program every year.

Then there’s local nonprofit Path with Art, which offers no- to low-income adults recovering from homelessness, addiction and trauma by offering, among other things, free art classes with established artists such as Michelle De La Vega or Deborah Faye Lawrence and visits to 25 partner arts and cultural organizations including Seattle Symphony, Seattle Rep, Hugo House and Seattle Arts and Lectures. They are on track to serve 600 people in 2017. As with anything art related, the practical effect of arts programs is hard to quantify. But if you visit these classes, you’ll see them making a difference in people’s lives. Art therapy can be effective in helping people deal with challenges such as poverty, substance abuse and discrimination, and arts programs can help challenge negative stereotypes of people living with homelessness.

A young man named Isaac says Art From the Streets gives him a place to escape in his own mind. He’s one of the few people at this table who considers himself an artist. “An amateur percussionist,” he specifies. “We’re starting a tribute band. We’ll cover music exclusively of the Tupperware Remix Party. Isaac’s goal is to tell stories and make his audience happy. “That’s what they deserve.”

Bright-eyed Debi-Rae likes to sing and act, and today she expresses herself through fonts and scripts, drawing Japanese characters with a red marker. “I have to have moments like this,” she says. “Now, this is just what I need.” Efreum, who has been coming to UGM for a year, is working on a collage. “I want it to look astronomical,” he says, positioning a nondescript skyline behind snow-topped mountains. “The city and its grand buildings will loom behind the mountains. Otherworldly.”

Trevor draws with intense concentration and greets me with a warm, wary smile. When he talks, he cuts right to the chase. “I am a graduate of the program. I’ve been coming here on and off since 2013. I’m an addict. It all started for me when an accident broke part of my back. It’s a constant battle for me out there. It’s been a hard 24 hours. Somebody died. This helps me keep my mind off things.”

When you’re unhoused, everyday tasks—navigating the city’s shelters and food banks, finding a place to wash clothes—can take up most of your day. “Keeping it together becomes a full-time job,” says artist Aaron Hill, who currently sleeps outside and has been taking classes with Path with Art since he saw a brochure lying around Recovery Café in 2012. Since last year, he’s been on the Program Advisory Board.

“It’s difficult managing things, hard to keep yourself and your stuff safe,” he says. “And sometimes your sanity too.” Recently, someone stole his backpack. Classes at Path with Art offer a small reprieve from the world outside, as does making art, which he is constantly doing despite the hardship. Hill’s focus now is experimenting with as many techniques as he can, to grow as an artist.

Carving, collage, printmaking, drawing and sculpture—Hill is voracious, exploring as many media as there are classes at Path with Art. Hill keeps his drawings, watercolors and prints carefully tucked away in a storage unit, where he also saves a backpack, extra clothes and a sleeping bag, just in case.

Hill leads me through the Pioneer Square storefront gallery of Path with Art. He points to the recent book sculpture he made, a 3-D collage that will be on view in the art show Summer Visions opening on July 6. “I’ve always had this near-holy reverence for books, and then there’s this teacher telling us to rip them apart,” he says. “But I loved it.”

The book sculpture, “American Caesar,” bears a photo of his great-great-uncle, a World War I soldier, along with several historical documents. He’s fascinated by genealogy, or as he calls it, “stories that have been lost.” Hill recalls stories of his great-uncle, who moved from South Dakota to Seattle, while he pulls up a series of stark blue prints based on old family portraits, their images ghostlike, both haunting and warm. “I wouldn’t be here if my great-uncle hadn’t moved out here. I guess the question I’m asking is: ‘why am I here?’” 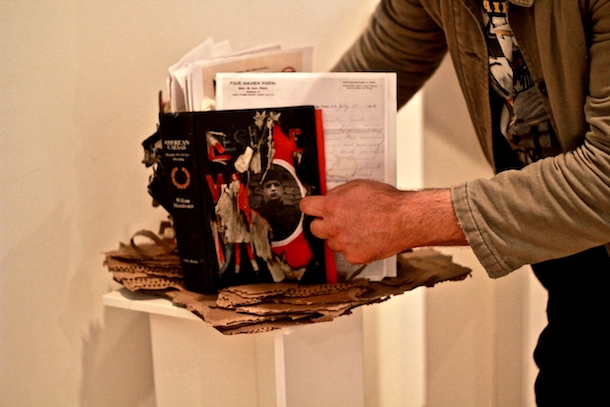 Currently, Hill is working on a large-scale project where he will literally map out his ancestors’ trajectories. For now, the work only exists online, but he dreams of having more access to space and materials to make a physical work one day. Usually, he uses digital apps to make art on his phone, or in Photoshop at the library. The only thing he keeps with him is a notebook with collages. One page reads, ‘Some Fun Facts about South Lake Union,’ lettered inside a red box. ‘Amazon has opened a community Banana Stand.’

Hill has always been creative. He was editor of his high school newspaper and filled his college schedule with art classes before dropping out. Yet he never considered himself an artist. “When the vice president of the school bought one of my prints, an etching on copper, someone told me, ‘You’re an artist now.’ I didn’t really buy into that. Even now, it’s hard to call yourself an artist when you’re not selling stuff or don’t have your own show.”

Selling work is a challenge for every artist, and even more so for artists living with homelessness or disabilities. The Boston-based start-up ArtLifting, an online platform where businesses and individuals can purchase works and prints from artists living with homelessness or disabilities, wants to tackle this. Currently, the website represents seven Seattle-based artists including Jeffrey Mayo and Henry Van Voast, who found his way to Artlifting through UGM.

“I would love to sell my work,” says Hill. “But I need to get my feet under me. You can’t really focus on all the practicalities of selling your work when you’re trying to avoid sleeping outside another winter.”

Whether it’s freezing or broiling, “the class might be the only thing you’re looking forward to,” he says. “Hang out with people, make art, learn something. A place where you can get away from anything else for a couple of hours. It’s therapeutic and meditative. Every student I talk to has the same reaction. A lot of people will tell me, ‘I had no idea I could do this. I didn’t know that I had a talent for this.’”