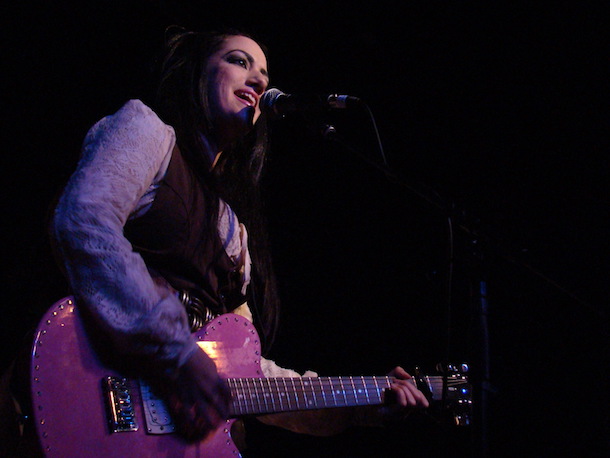 Seattle-based film archivists Something Weird traffic in nostalgia, but not the kind of nostalgia your grandparents would ever dare acknowledge. The company’s vaults brim with exploitation films, cheesy monster movies, ancient burlesque loops, classroom hygiene films, and much more—all dating from the 1920s to the ‘70s and all, yes, really weird.

Seattle’s Prom Queen crafts music that sounds nostalgic on its surface, but their material likewise channels nostalgia through a skewed lens. The band delivers a swirl of deceptively retro sounds—girl-group vocals, surf rock, exotica and 1960s-vintage pop—with an arched eyebrow and a wryly black sense of humor.

If you think the combination of these wonderfully retro-subversive elements sounds like a match made in heaven (or in Twin Peaks, at least), rejoice. This Thursday night, Prom Queen plays a special Seattle International Film Festival event at the Triple Door, backing some 90 minutes of Something Weird’s weirdest clips. It’s the latest entry in Puget Soundtrack, a series of events created by Northwest Film Forum Executive Director Courtney Sheehan in which local bands back a movie of their choosing with their own music. The Film Forum co-sponsors this presentation along with SIFF and Capitol Hill Block Party.

This particular Reese’s Peanut Butter Cup of retro cool is the brainchild of SIFF Programmer Clinton McClung, an avowed Prom Queen fan and trash-film aficionado. “Prom Queen is not only one of my favorite Seattle bands, but they have such a fun, unique, retro aesthetic that seems to naturally go with film,” McClung says. “I asked Celene [Ramadan, Prom Queen’s lead singer/principal songwriter/mastermind] to be a part of the show, she said yes, and we were off to the races.”

McClung reached out to Lisa Petrucci, one of Something Weird’s key curators. She provided unqualified support—and a ton of clips—for the SIFF programmer to choose from. “I’m pretty familiar with the Something Weird catalog,” he says, “so I was able to target some specific elements I wanted to highlight, [like] classic burlesque, strange industrial films, and fun and kitschy exploitation trailers.”

Ramadan, for her part, had total confidence in McClung’s curatorial acumen right out of the gate. “I put all my trust in Clinton for selecting the visuals,” she notes. “I think he did a great job finding pieces that fit our aesthetic just right.”

The Prom Queen frontperson and her bandmates are pouring their usual craftsmanship into their end of the presentation. “Everything we are playing is inspired by the clips that will be playing,” Ramadan says. “Some are full songs, some are improvisations. But everything is there to serve the visuals as best we can.”

The film-noir supper-club vibe of the Triple Door should make for a perfect setting, a point not lost on Ramadan and her cohort. “We love playing the Triple Door,” she admits. “Something about it feels old-school in a way. It’s a really special venue.”