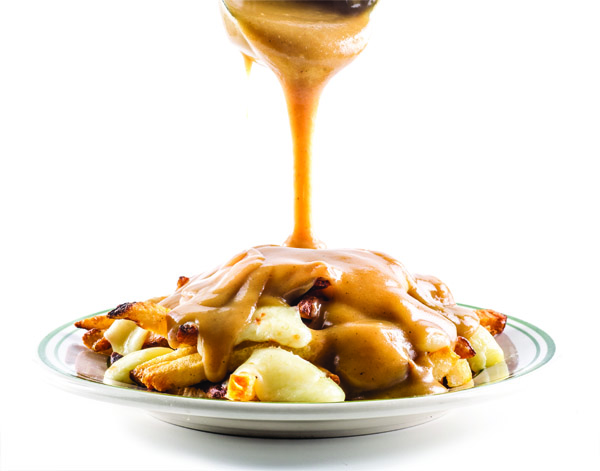 A Québécois Searches for Home (Cooking).

I left behind many things when I moved from Montreal to Seattle: friends, keys, varied weather. But the thing that hurt me the most, that I abandoned like Willem Dafoe in Platoon, was poutine.

Poutine’s origins are as muddled as its translation. The going story comes from a restaurant in the Quebec town of Warwick, “Capitale de Fromages.” Fifty-some years ago, a take-out customer at Le Lutin Qui Rit requested fries and cheese curds in a bag, prompting owner Fernand Lachance to respond, “Ça va faire une maudite poutine,” or “That’s gonna make a damn mess.” Separately, and supposedly without knowledge of Lachance’s innovation 10 years earlier, Jean-Paul Roy was serving gravy and fries at his restaurant Le Roy Jucep when he noticed customers adding curds, which he sold separately. This gave him the ingenious idea to make fries, curds and gravy a three-piece band. Le Roy Jucep is still open in the fair city of Drummondville.

Poutine is to Quebec what the burger is to America. We know we have more to offer, but when someone says they don’t like it, we sigh with terminal disappointment. It’s unfair to expect a new girlfriend to live up to the lost love of your life, and it’s similarly unfair to expect Seattle to recreate Quebec poutine. And yet, I need it like a fix.

At Uneeda Burger in Fremont I was handed a lump of fries with runny cheese sauce, which drained to the bottom of the dish where the gravy lay in wait. It looked like something served in a French-Canadian prison. To call such curdless cheese fries “poutine” is copyright infringement, which is why I slammed my fist on the counter and said to the cashier, “I’ll see you in court!”

Many Seattle restaurants feel the need to put their own postmodern spin on traditional things, but when it comes to poutine, one must first master the original before moving on to higher levels. Hattie’s Hat adds mashed potatoes, Quinn’s uses “fontina fonduta” and “veal demi-glacé,” 8oz. Burger Bar tosses in braised beef and Skillet features melted cheddar and herbs. These ingredients are to poutine what Guns N’ Roses now is to Guns N’ Roses then, and though they’re respectable dishes, I found myself wandering the streets yelling, “Please, does anyone make a regular poutine around here?”

Smith and Steelhead Diner deserve credit for serving poutines that aren’t preceded by the phrase “our version.” They accept poutine for what it is: wonderful garbage. Both poutines had sound gravy; the Steelhead version was light on curds, whereas the cheese at Smith congealed too quickly (I’m like Goldilocks), leaving a hardened mass in which the individual curds were unidentifiable, like passengers in a plane crash. Still, these poutines had heart. Their makers understood that tradition done sincerely does not undermine a restaurant’s hipness.

The sad reality is the poutine served at a Canadian Burger King is a closer approximation to the original than anything found in Seattle. If you ever get the chance, head to La Banquise in Montreal—it’s open 24/7 and features 28 different poutines, all under the umbrella of the traditional headliner.

In a way, I’m relieved that I didn’t find a comparable poutine in Seattle. Doing so might’ve undermined my Québécois identity and left me crying into a bowl that tasted right but felt horribly wrong.