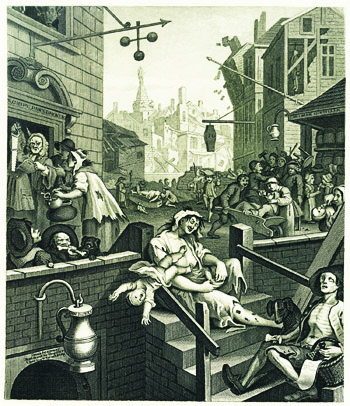 Here’s to gin! The literary drunk.

Wine warms, vodka clouds, tequila makes you slip your shirt off. But gin loosens lips and leaves language lucid and luminous. Both Calliope and Polyhymnia are trapped like genies in that bottle.

Proof is on the printed page. The Fitzgeralds were famous for their gin rickeys. Hemingway’s autobiographical character in Islands in the Stream gazed at the ocean through his Green Isaacs Special, a Caribbean twist on the Tom Collins made with Gordon’s, green coconut water, lime juice and bitters. Anne Sexton took gin “warm and neat from old jelly glasses” (or in the form of dry martinis carried around in a thermos). Tennessee Williams took his gin whipped up in a creamy Ramos fizz. Dr. Seuss even adopted his pen name on account of being caught with some bootleg gin at a dorm party during Prohibition, an infraction that forced him to use a pseudonym when writing for the campus humor magazine (he was editor-in-chief).

Gin and writers were made for each other. You can almost visualize a frenzy of carbonated prose bubbling up from the humble G&T, dizzy with the perfume of resinous turpentine, rose petals, cucumber and lime.

Gin has suffered an (un)fair share of infamy throughout the ages. Its prolific production and consumption in 18th century England earned it a bad reputation from the start. A 1751 engraving by William Hogarth, titled Gin Lane (above), sums up the sentiment: It depicts a slummy street in London lacquered with skin-and-bone drunks crumpled on stairways, mad men being rolled away in wheelbarrows and an alcoholic prostitute letting her screaming infant tumble headlong to its death in a gin cellar. Around that time, gin was disparaged as “mother’s ruin.” The nickname survived the centuries: “The principal sin/Of gin/Is/Among others/Ruining mothers,” quips an anonymous verse from 1940. These days its overbearing herbaceous flavor, that candied-evergreen tang, still rankles detractors. They say it’s no better than flavored vodka.

Not true. No paeans are bottled in that Stoli.

There’s a gin drink for every mood. If you want something austere and anachronistic, channel Jack London’s Hardman Pool and order a gin and milk with a dash of nutmeg. Less dour but still frosty and clouded is the Aviation, with Plymouth and crème de violette, over which London would have authored perhaps more purple prose had he lived later into the 20th century. Good gin (splurges like Hendrick’s or Old Raj) packs a salubrious brightness, like imbibing citrus groves and sunshine. The plastic perfume of cheap stuff from the well still scintillates on an overcast day, even if it kindles a dimmer light.

The piney, evergreen flavor of gin is downright Northwestern, really. Local poet and professor Heather McHugh recommends Victoria Gin in Victoria, B.C. She tells of a boudoir-styled bar there, decked in velvets and rosy Oriental rugs, where once she tipped back gin while a topless accordionist wooed boozy patrons and “fastidious lady-librarian diners blanched.” Now that’s the spirit! Amanda Manitach