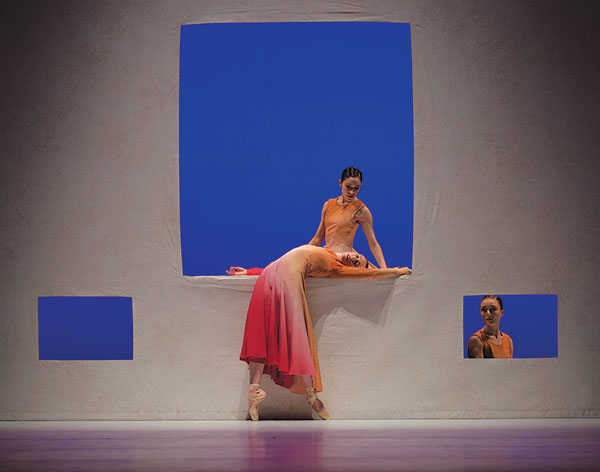 Jessica Lang’s Her Door to the Sky

In Twyla Tharp’s darkly poignant contemporary ballet Afternoon Ball, a dancer in ripped fishnet stockings paces the stage like a caged animal. A man opens his mouth in silent screams, then keels over from a punch to the head by an unknown assailant. Commissioned for Pacific Northwest Ballet’s 2008 season opener, Afternoon Ball returns to McCaw Hall as part of PNB’s Her Story, a bill featuring three of America’s most influential choreographers: Tharp, Crystal Pite and Jessica Lang.

The program is billed by PNB as “textured by three renowned female choreographers.” It’s no secret that classical ballet suffers from serious gender imbalances: While the majority of performers are women, powerful artistic directorships and choreographers are largely men—some of whom said in an April 2017 New York Times interview, “I don’t see it as a problem” and “I’m not sure why it exists” when asked about ballet’s gender inequity.

Pite, for one, is tired of being asked about the efficacy (or lack thereof) of using a choreographer’s gender as a selling point. “What if we just went to a show that didn’t advertise that it was all-female choreography?” she asks. “Would it change the way you look at it?”

Pite’s choreography isn’t in demand because it’s good in relation to her gender; it’s popular because it’s uniquely brilliant. She weaves themes like insect behavior and tragic accidental death into choreography that sticks in your head long after you see it. Likewise, the influential choreographic language of Tharp, an American dance pioneer, is now woven into the fabric of classical ballet. She’s written books, choreographed Broadway shows and collaborated on movies like Hair and Amadeus. And Lang, a former Tharp company dancer, is a Juilliard graduate and sought-after choreographer and director of world-class ballet, contemporary dance and opera productions. This kickass cumulative resume doesn’t need heavy-handed billing.

Lang’s ballet Her Door to the Sky—a commission by PNB and the famous Jacob’s Pillow Dance Festival that premiered this past spring—is a strong piece of modern feminist art, and an ode to the works of visual artist Georgia O’Keefe. Dancers perform long, luscious turns and dèveloppés that spread their brightly colored skirts into halos and fluttering trains. Men perform alongside women instead of chaperoning their more difficult movements. Against the rich colors of the American Southwest, Lang has transferred to the stage the strength of nature and the feminine spirit, themes long-loved in O’Keefe’s art.

In contrast to that quiet joy, Tharp’s Afternoon Ball is full of sharp, violent movements and mysterious conflict. Characters dressed like punk-rock vaudevillians dance alongside couples dressed for a 19th century ball. A dancer in a frenzied pas de deux chases her partner off stage with quick kicks and a fake slap to his face, then leads him back centerstage to perform a jaunty, contemporaneous jig.

Pite’s Plot Point, a PNB premiere set to the music of Alfred Hitchcock’s Pyscho on a colorless, two-dimensional set, celebrates the mechanics of storytelling with two sets of characters: maquettes, the blank-faced models used by sculptors or architects as place-holders for an idea, and their corresponding characters that develop throughout the ballet.