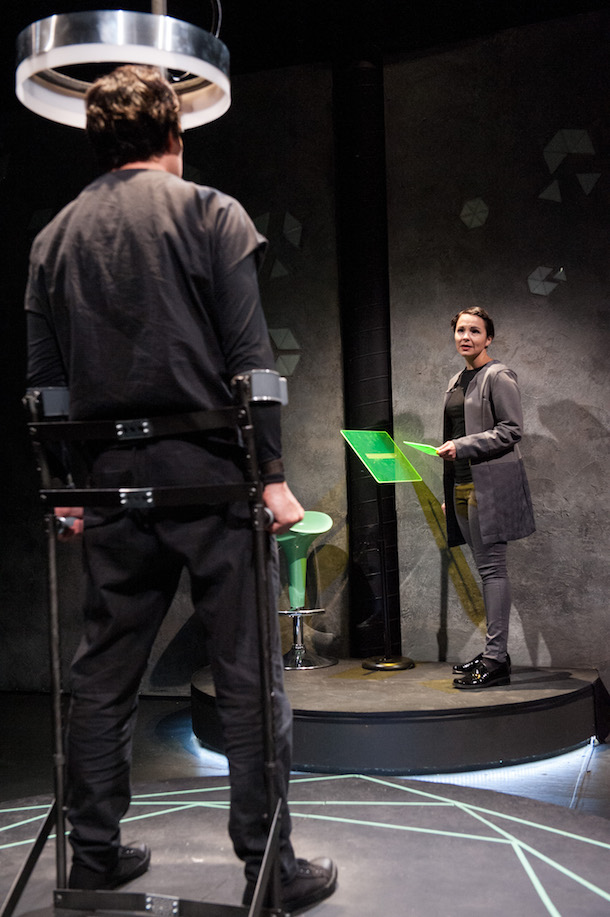 The term “dinner theatre” instantly brings to my mind the hilarious tirade Kevin Kline goes on in the 1991 comedy Soapdish: “You try playing Willy Loman in front of a bunch of old farts eating meatloaf! Chewing and slurping and spitting out their pits! I was in hell!” Such has been the reputation of dinner theatre since the dawn of dinner.

Since 2009, Cafe Nordo has gone to tremendous lengths to remedy this sad situation, with greater and lesser degrees of success. Nordo’s newest production, Onērus (pronounced, “oh-NEAR-us”), written by Nordo co-founder Terry Podgorski and directed by co-founder Erin Brindley, falls largely into the “lesser” column. The dialogue is dense and heavy; it crams in so much data, tripping all over itself to explain itself, that it’s difficult to follow all the show’s threads.

Onērus catapults us into the year 2048 in an overly high-tech, fraught and soulless place where people with too much money literally suck people’s dreams away. This lack of organic dreaming is a tragic side-effect of high-tech implants called “Sync-Discs” that connect future citizens to a version of the Internet called, appropriately enough, “The Cloud,” all day, every day, forever.

Dead center in the middle of Nordo’s impressive Culinarium, now permanently located in the original Elliott Bay Book Co. spot in Pioneer Square, sits a huge, sci-fi-looking machine with the power to bring people into “The Drift,” the mysterious in-between place where dreams exist. Once there, the machine sucks the dreams out of the heads of “deviants,” which are then consumed by a legion of nameless clients (us, the audience) who have lost their ability to dream. And the plot? I’m still not sure. Mostly it’s like listening in on a bunch of intense corporate office workers in the future as they do their jobs, talk about doing their jobs, give the long and confusing history of their jobs.

Nordo gathers clever chefs and seasoned theatre artists, and they labor together to create a total experience, the food working in harmony with the play to create a cohesive theme. Onērus intends to take us to “the boundary between sleep and awake, dreaming and not,” which, for instance, is gastronomically represented by a “cloud,” a big fried chunk of “rice skin” (similar in texture to a pork rind) covering a smear of raw tenderloin—butternut squash if you’re meatless or just don’t do the tartare thing. That’s just one of the peculiar and rather unappetizing courses in this four-course affair. Another is something called the “Onērus’ Sedative,” which is a shot glass filled with a puree of cranberries, star anise and pear. I’m no food critic, but I’d say skip the soupy shot and get the Vignale de Ceclia Prosecco, which was delightful.

Opal Peachey is one of our “dream viewers,” guiding the process of dream-extraction and consumption, and she is a highlight of the talented cast, as are Nordo favorites Evan Mosher and Devin Bannon. Mosher, a Gregory Award-nominated sound designer, was also responsible for much of the sound, along with composer Annastasia Workman. They created a mesmerizing, measured drone of low-key tones that set the ominous mood of Onērus perfectly—it could easily lull you into a trance, or send you into a low-key panic attack. There are original songs, too—gentle, somnorific, haunting. The musical interludes were possibly the most enjoyable and engaging part of the production. If Onērus ever dropped an official soundtrack, I’d buy a copy.

Onērus is dark, moody and utterly dystopian, full of alienating technology that’s valued far above basic humanity, heartless people, corporate rule (there’s a scary “Corporate Congress” and everything), massively destructive hurricanes, famine and war. In other words, it’s just a little too reflective of the current news cycle. Stories of America’s dystopian future are all too common as it is, and grow tiresome. Such hopelessness feels claustrophobic and depressing in the perilous age of Trump. Unless your criteria for entertaining, engaging theatre depends mostly upon clever wine pairings, I’d give Onērus a pass and hope for a brighter tomorrow.