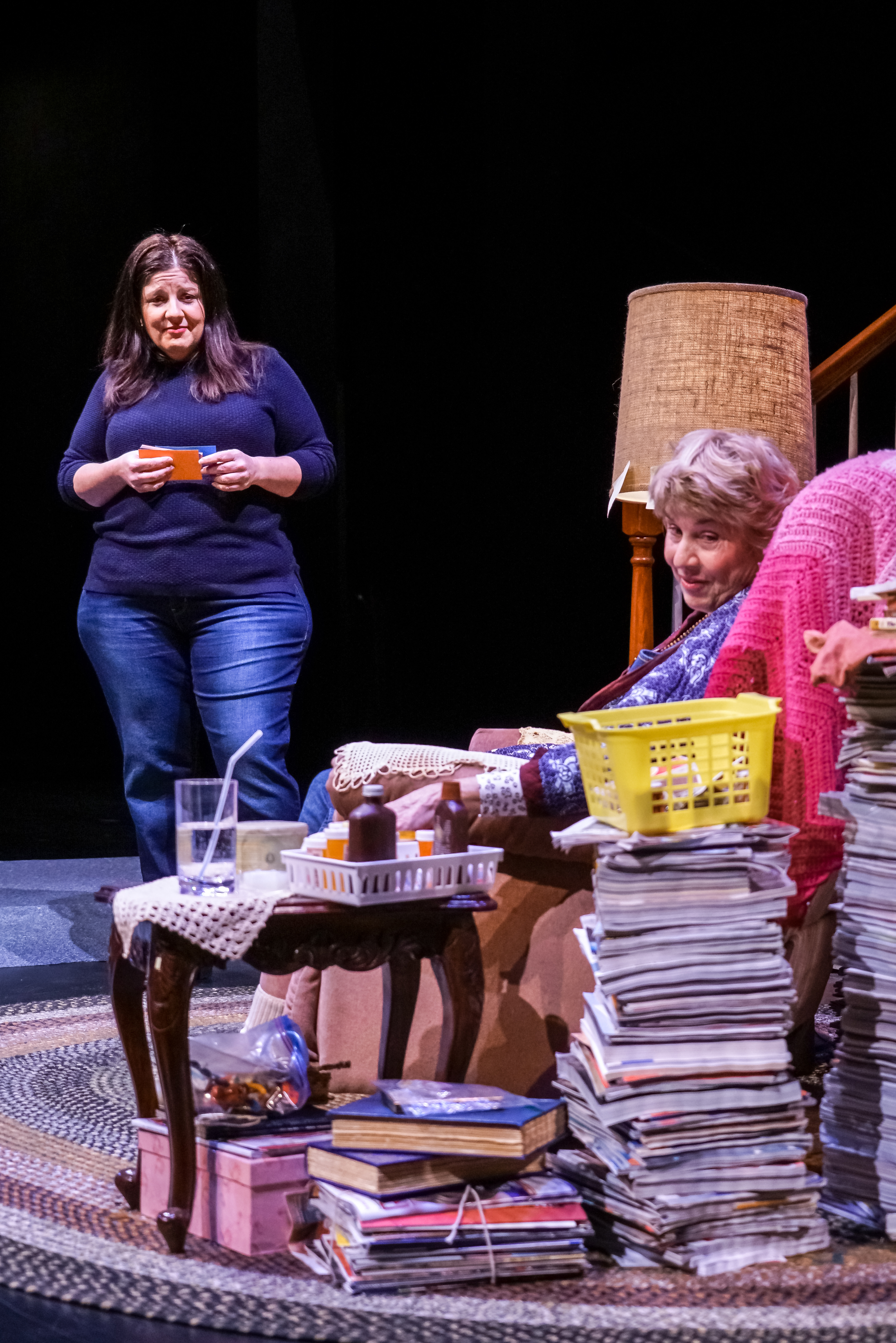 Sarah Rudinoff bounces lightly on the balls of her feet, a smirk on her lips and slight bend forward in her waist, as she emphatically explains to her audience at Seattle Rep, this is not a play about my mother and me. As Lisa, the star of Lisa Kron’s meta-theatrical, laugh-out-loud funny, quasi-autobiographical play Well, Rudinoff is the line-leader of her life story. I say “quasi” because Kron has a playful attitude with the truth. She’s telling a story about herself, not the story of herself, and she can tell it however she wants.

It’s not even a play, it’s “a multi-character theatrical exploration of issues of health and illness both in the individual and in a community.” Fun! The two-pronged narrative deals with Lisa’s college stint in a hospital allergy unit, trying to figure out what was ailing her, and her childhood in an area of Lansing, Mich., that her mother played a large part in integrating.

Lisa was sick and then she got well. A neighborhood was sick, and her mother, while sick herself, healed it.

Rudinoff, excellently cast as the wry, sharply self-aware writer, begins the presentation with a familiar formality, addressing the audience directly from center stage as her mother dozes in a recliner in her cluttered suburban living room, stage left. Stage right, a stellar ensemble of actors animates scenes from Lisa’s past: Her fellow patients in the allergy unit. Her childhood friends, making up dances at a backyard picnic table. The elementary school bully that somehow snakes her way into Kron’s storytelling.

It doesn’t take too long for things get out of Lisa’s tightly scripted, index-carded control. At first her characters dutifully play their roles, but they soon start having more opinions that she thinks they should, call her out when they know she’s re-writing history or conveniently mischaracterizing to make a point. Driving this gentle rebellion is her allergy-beleaguered mother, Ann Kron, played with ingratiating exhaustion by Barbara Dirickson. When Lisa’s navel-gazing gets too precious, Ann is right there to pull us all back into reality. “Did you offer these people something to drink?” she asks Lisa, the moment she notices the other people on stage with them.

“You realize that your parents live in an alternative universe where your therapy has no power,” Lisa says early on, as she makes her first stage-foray back into her childhood home.

Well premiered off-Broadway at The Public in 2004 and moved to Broadway in 2006; both productions starred Kron as herself. The Rep production, deftly directed by Braden Abraham and led by command performances from Rudinoff and Dirickson, is loving and combative. It unravels rapidly and organically, as the remembered and real worlds crash together in brackish narrative waters.

Kron, now known best as the librettist for Tony-winning musical Fun Home, has spent a career contemplating the fundamental impossibility of truly knowing someone else’s mind, and the nobility of trying. Healthy people, says one of her allergy unit compatriots, look at a sick person and think: Why can’t you be well? “When they imagine what your life is like, they imagine your sickness on top of their health!” They can’t conceptualize life without the resources of their wellness, in the same way that Ann realized her understanding of race rooted in her whiteness, which she never would have realized were it not for formative time spent living in Maryland with a college friend. “Before I went to Baltimore, I think I somehow pictured being Black was just like being white, only you were also Black,” she says. “You just don’t imagine that your situation is that different from anyone else’s, unless you’ve been in a situation where you’re different yourself.” 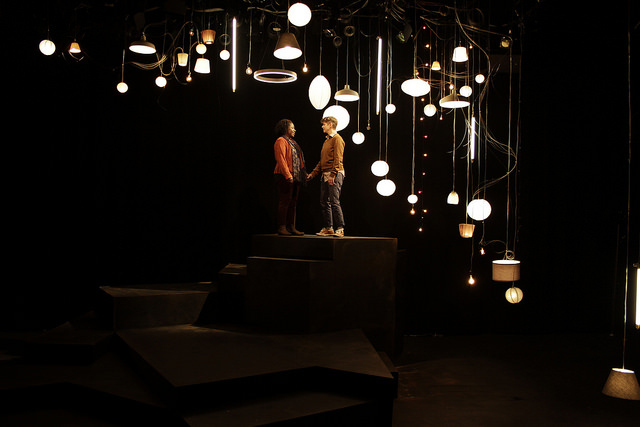 Rather than abandoning them slowly, Tanya Barfield’s Bright Half Life does away with the rules of time from the beginning, as it zips and jumps through a life-long love story, breaking it down into its elemental parts.

The love story of Vicky (Tracy Michelle Hughes) and Erica (Rhonda J. Soikowski) rarely does run smooth in this hopeful, heartbreaking two-person play now running at 12th Avenue Arts, produced by New Century Theatre Company. Barfield has smashed their story into glittering shards—scenes exist mostly as fragments, often returned to again and again. Meeting, dating, kids, marriage, parenting, deaths, illnesses, breaking up, getting back together. Flying kites, going skydiving. Professional successes and failures. Flitting around in time let’s these scenes play off one another with the perspective of time, creating a whole that explores cause-and-effect that you can’t see from inside a relationship.

What we can see is a layered, evolving love between two very different women. Erica is a buoyant and exposed, with a sleeve made of hearts and a less-than-forgiving attitude toward those less loudly out-and-proud than she. Vicky is more cautious and career-driven, and she’s a traditional thrill-seeker, readier to jump out of a plane than get emotionally risky.

Just as our lives are much more than just our loves, this is more than just a love story. Barfield finds moments that bring the complications of the outside world into this intimate tale, in a way that serves to illuminate both. Coming out to a family that doesn’t want to know; how much harder Vicky works than any of her (white, male) corporate colleagues; the different experiences of white queer women and queer women of color.

Hughes and Soikowski navigate this play’s hairpin turns with staggering emotional agility and precision. They’ve made each moment so clear that you know when you’ve returned to it—a huge boone to an audience working to keep up.

Director HATLO and their design team have handled this play with the lightest of touches; anything more would sink a piece flying at such a pace. The two actors use every inch of the simple, many-tiered black set; creating a physical texture that this small-scale requires, all bathed in a gentle light of myriad, varied hanging orbs. Sound cues, whether Tracy Chapman Muzak or traffic sounds, are so low and subtle that they perfectly set a tone without ever calling attention to themselves.

That light touch matches the skillful delicacy of Barfield’s playwriting. Time markers are dropped in gently—the mention of a phone with a cord on it, a sidelong political reference, a one-word reference that reminds us that we’ve seen this scene (or another part of it) before. Expect to hear confused whispering around you, but don’t fall for it—let the stream of storytelling take you, and you’ll always keep up with what you need to. Ultimately, the form says more than the play does—the trite ending was a huge disappointment after the fizziness and unpredictable emotion of the preceding hour. Even still, Bright Half Life reminds us that in life and love, the sum and the parts can’t be separated, and the end of a story isn’t the total of it.