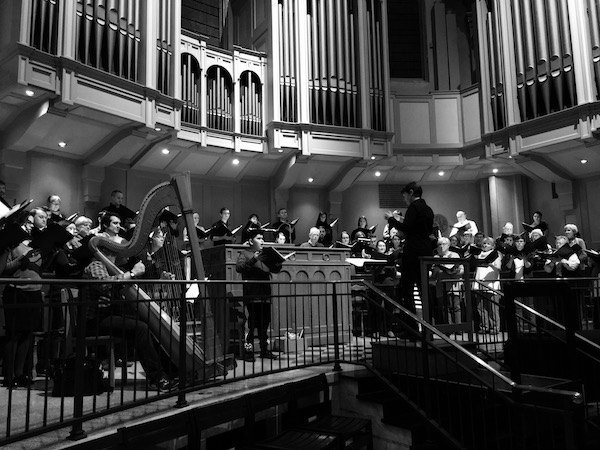 “Behold how good and pleasant it is, for brethren to dwell together in unity.” In her introduction to program notes, Seattle Pro Musica conductor Karen P. Thomas pointed out those words from Psalm 133 that end Leonard Bernstein’s “Chichester Psalms,” the final work on the group’s Saturday evening program. That entire work is set to psalm texts underlining the desire for people of all nations and faiths to live together in peace and understanding, and this entire Pro Musica program was built around this theme.

Thomas set the tone for the large audience filling St. James Cathedral with the short “Ubi caritas” by Norway’s Ola Gjeilo, based on chant. While the harmonies that develop are modern, the ambiance it set was deeply relaxing and peaceful.

All the works on the program were composed within the past century; they came from many different countries, and many from sacred texts or prayers. The “Laudate pueri, Dominum” by Romanian-Hungarian composer Levente Gyongyosi was a commission by Pro Musica and several other women’s choirs, and this was its premiere. It had a light, fluttery feel, and came gradually from a sense of uncertainty to one of joy.

While the “Ubi caritas” and Brian Schmidt’s “Lux Aeterna” at the beginning were both for a small male group, the next two were for a small group of women: the “Laudate” and Poulenc’s “Litanies a la Vierge Noire.” Here the voices were pure and supplicant in prayer, with organ (played by Joseph Adam) interrupting with loud clashing chords.

Throughout the program, the choir was marked by totally accurate pitch sense, even when intervals or harmonies were anything but expected. Thomas, who has been at the choir’s helm for over a quarter-century, is a master at shaping choral music to express the emotions contained therein.

Zander Fick’s soft, contemplative “Die Onse Vader” (The Lord’s Prayer) in Afrikaans, rising in volume and affirmation toward the end, was followed by Dominick DiOrio’s soothing “Peace I leave with you.” Both were for full choir, as were Bruckner’s “Os Justi” and several works by Seattle’s late Bern Herbolsheimer.

Every element of the program worked together to create in the cathedral the atmosphere described in Thomas’s opening statement, and built towards the two main works on the program, James MacMillan’s “Cantos Sagrados” and the “Chichester Psalms.” MacMillan’s work set three poems documenting political repression in Latin America, interleaved with texts from the Latin Mass. In English, the poems were immediate and shocking. The first, by Ariel Dorfman, told of finding yet another body in an Argentine river during the disappearances. The next, Ana Maria Mendoza’s question of why a patron saint could protect diametrically different people in different countries.  The third, again by Dorfman, on the feelings of a condemned prisoner touched gently by a guard. Half the choir sang this with organ accompaniment and music brilliantly descriptive of the words, particulary the tension, anxiety, hurry-scurry of the first, with crashed irregular organ chords.

Lastly, in Bernstein’s great work, perhaps his finest in serious mode, the entire chorus sang in Hebrew accompanied by organ, harp (John Carrington) and percussion (Bonnie Whiting), with emotions from joy to peace, and anger all the more telling because it was soft, hurried and jazzy. Alex Zuniga, a member of the Northwest Boychoir, sang the alto solos as indicated by the composer, perfectly on pitch and true.