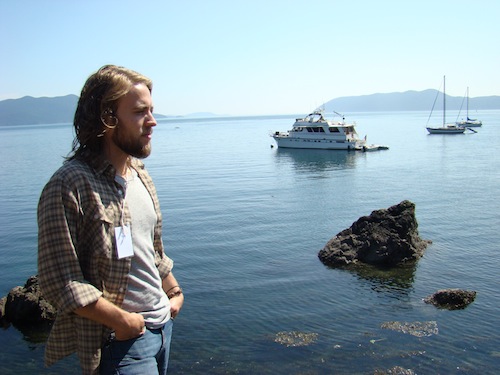 The Fest started out as a humble showcase for some of this region’s key roots, folk, and Americana acts. But quickly—and without really trying—Doe Bay Fest became the tentpole around which a significant piece of the Northwest music scene has converged. The festival has filled up rapidly each year (the fifth Fest, coming in August 2012, sold out in less than two minutes), and arguably helped shine a light on one of this town’s biggest recent musical success stories, The Head and The Heart.

With all of this groundswell, it was only a matter of time before someone thought to document the Festival on film. And the documentary Welcome to Doe Bay (which makes its world premiere at SIFF this Sunday, June 3 at the Egyptian) provides converts as well as non-initiates with a firsthand glimpse at Doe Bay Fest’s history, and the musical acts that propelled the festival’s 2011 incarnation.

Appropriately enough, Welcome to Doe Bay is spearheaded by two local filmmakers. Co-directors Dan Thornton and CB Shamah both sport resumes brimming with Seattle connections: Thornton teaches film locally and has worked on everything from Discovery Channel documentaries to Sleepless in Seattle. And Shamah, a Seattle Film Institute grad with plenty of on-set film work under his belt as well, was co-owner of Columbia City Theater, the South Seattle music venue that’s provided a springboard for many of the artists who’ve graced the Doe Bay Fest stage.

Thornton says the idea to do the film came to him in a flash last year. “I’d just been down to the Theater,” he says. “CB, Kevin [Sur, Doe Bay Fest’s co-producer], Gary [Mula, soundman for Doe Bay Fest and Columbia City Theater], and I were there, and I guess it just occurred to me.

“I said, “Why don’t we just do a documentary on Doe Bay?” The place was silent for a second, and Kevin said, “That’s a fucking good idea!”

Thornton had only known Shamah for a short time, but was eager to work with him. “I knew [CB] saw these people every day, and it was awesome that he had a film background,” Thornton says. “Some people are encyclopedic about [film]. I need people like that around, to sort of throw ideas at—That’s CB, totally. And then it just grew really fast.”

Shamah realized that the partnership would be a fertile one, largely due to his and Thornton’s contrasting viewpoints. “Dan comes mostly from a documentary background,” Shamah notes. “[his] point of view was of this amazing grassroots festival that just sprouted and has been highly successful…I wanted to document, specifically, the music.”

And Welcome to Doe Bay is nothing if not a crystal-clear snapshot of some of the Northwest’s finest musical acts. Not surprisingly, the festival’s biggest draw last year—The Head and the Heart—get their share of screen time. “We knew we were going to get something special from them,” Thornton relates. “They don’t get special treatment in the movie, but they have a privileged position…They were the headliners.” The band proved to be exceptionally cooperative on the project, despite dealing with the rigors of their meteoric rise.

“They made themselves absolutely available to us, and they didn’t need to,” Thornton says. “These guys had been on the road, they obviously deserved a break, but they came [to Doe Bay] to sort of feel like they weren’t rock stars getting a lot of attention.”

The Head and the Heart may have been the highest-profile band of the festival, but the Artists who peopled the Doe Bay stage in 2011 covered the gamut of styles, from Fly Moon Royalty’s electro-soul to Champagne Champagne’s brand of boundary-breaking hip-hop to Ravenna Woods’ dark and jittery rustic punk-folk. Shamah and Thornton cover nearly all of them in the documentary, and it takes little prompting for them to wax rhapsodic about their favorite acts to shoot.

“I’d go with Kelli Schaefer,” Shamah pipes in. The Portland singer/songwriter’s set at Doe Bay last year “was just ridiculous. We were doing another interview when she was playing, and I was like, who WAS that?” Schaefer’s epic, cathartic powerhouse of a performance provides one of the documentary’s undisputed highlights.

Champagne Champagne’s work at the festival also registered strongly with the directors. “They looked so awesome on camera, and…they’re such amazing musicians,” Thornton says. “You get a sense of the audience being so into it [during] their set.” Shamah concurs: “They’re the closest thing Seattle has to rock stars right now.”

The directors found that the music also provided much of the documentary’s dramatic tension. “The film has a truly, relentlessly positive vibe, but as a filmmaker, I was worried about that,” Thornton admits. “I’ve never made a film that’s just people saying nice things about everyone else for close to an hour-and-a-half. So we showed it to a bunch of people who are not from the Northwest…and someone [at the screening] pointed out that the music, at certain points, gives you that palate of drama.”

Footage of local indie-folk godfather Damien Jurado’s mournful, intimate midnight performance at Doe Bay 2011 proves the wisdom of that observation. “When I saw his performance, I suddenly saw [the documentary’s tone] in a different light,” Thornton concedes. “The narrative doesn’t have that sadness, but it’s in the movie, because of the music.”

At 78 minutes, Welcome to Doe Bay is a positively lean chronicle of Doe Bay Fest and its participants. And if it doesn’t have the epic scope of a Woodstock, Thornton and Shamah still manage to make the documentary more than just a music-filled advertisement for the festival. In addition to spotlighting the bands playing Doe Bay, Shamah’s and Thornton’s crew interviewed several music journalists (Sound on the Sound’s Abbey Simmons and noted blogger/Huffington Post contributor Heather Browne, among them) about the festival’s influence and its versatile roster of artists.

The film also follows festival co-producers Sur and Chad Clibborn and Doe Bay Resort owner Joe Brotherton through the nuts and bolts of the festival’s construction. Sur’s contributions, in particular, mirror the festival’s sensibilities. “I think the ethos of what Doe Bay is…really lies with Kevin—the way he does business, the way he sees the world,” Thornton says.

That unconventional business model provides another key thread in the movie’s structure—namely, the rise of smaller-scale, distinctively local mini-festivals that can still turn a modest profit. “You won’t necessarily lose money or lose credibility with an event [like this],” Thornton observes. “It proves the concept that smaller is better. And that may be the whole story—that you don’t have to ‘go big or go home’. You can go good, and let other people replicate the experiment.”