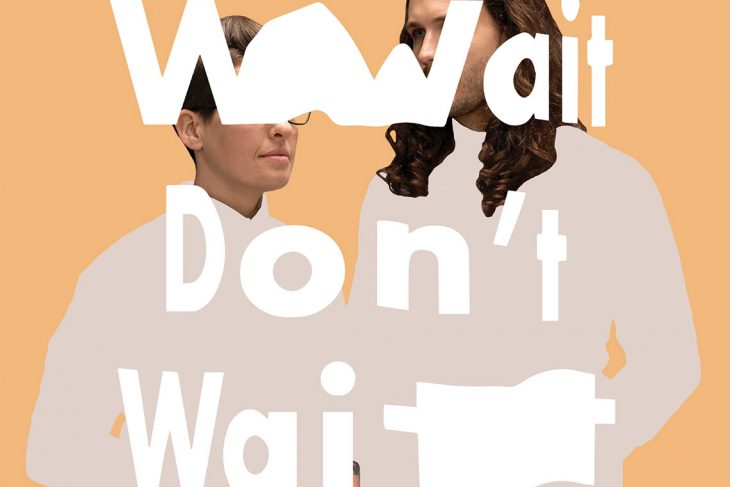 It was the 17th-century poet George Herbert who first penned the phrase “Living well is the best revenge,” but of course folks had been taking the high road for eons. Today, that sentiment runs up against social and political factions bent on exclusion and division, and it’s spilled out all over Wait Don’t Wait, the sophomore album by Seattle duo Sisters. “Joy as an act of revolutionary defiance in the face of oppression is the name of their game,” quips the accompanying press release, prefacing what appears to be an entirely apolitical album. In reality, the band simply decided to politicize their happiness and make their music as inclusive as possible. Living well indeed.

Constructed by two veterans of the Seattle music community, singer/drummer Emily Westman of Seattle Rock Orchestra and Lemolo and singer/keyboardist/guitarist Andrew Vait of Eternal Fair, Wait Don’t Wait is the second album Sisters has dropped since the beginning of 2017; they released their fantastic debut LP, Drink Champagne, on Valentine’s Day. The speed of their output reads as urgency to supply the world with more positivity.

The album sports many qualities from the bright side of vintage, from the warm softness of production to the thrusty rhythms of a sexier time. Part of the album’s success is its stylishly applied arrangements: Recording for 10 days at San Francisco’s Different Fur Studios, Vait and Westman put vintage toys like the Yamaha DX7 synthesizer and Roland CompuRhythm CR-78 drum machine to work—not to mention Vait’s own jazz flute and lounge sax. Together, the two produce an amount of sound that seems larger than what a duo should be capable of—which is easily conceivable if you’ve seen them flip between instruments on stage.

Vocals to match such funk demand a certain raw sexiness and swing, and though the duo’s falsettos would make the brothers Gibb blush, their delivery occasionally comes across a bit boxy. “When the time is right, I will take you home,” Westman sings, a little too on-beat on “Sleepy Eyes,” later plodding, “When you call my name, it will be divine.” But rigid moments like these are scarce. Vait shows impressive range across the record and Westman shines on songs like “Glitter Lights” and emotional closer “Love You Too,” each singer taking their time to find their natural environment.

Wait Don’t Wait is full of stimulating yet concise songwriting front-to-back and Sisters’ most easily enjoyable material thus far. In a genre as well-trodden as electro-pop, their instrumental dexterity and inventive song progressions are refreshing. The quick turnaround between albums left some stylistic similarities, and going forward the duo’s challenge is to venture further outside of their comfort zone. But for now, that zone is damn comfortable for all of us. Sisters are here to unify through entertainment: “We hold the light of the town between us” they sing on “Glitter Lights.” Their voices soar; their optimism inspires.