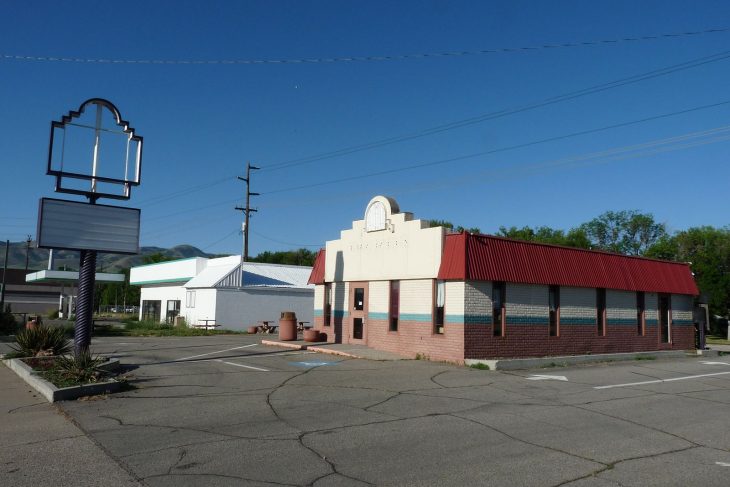 There’s a lot of talk in Seattle about us being stuck in a liberal bubble, especially since the election. One benefit of doing road comedy—if you could call it a benefit—is that you bump up against the “economic anxiety” of the national psyche every time you drive 45 miles beyond a metropolitan area to tell jokes in a bar. Living in city and doing comedy in flyover-land provides a constant reminder of the gulf between worldviews. It can be harrowing and weird and the pay is shit. But those of us who work the road can never be accused of being out of touch with the heartland. Road comics see it all in a way few other professions do.

Back in the early Obama years, I did a show in a hotel lounge in Pocatello, Idaho. It was a stop on the notorious “Tribble Run,” a series of far-flung, low-paying gigs in the greater Northwest. Named after the guy who’s booked them since the ‘80s, Tribble Runs were the easiest way for an inexperienced Seattle comedian to work the road, with long back-to-back drives through the vast Northwestern countryside to cities like Twin Falls and Billings. You don’t have to be super funny to get these gigs, you just need to be able to do your allotted time. And have a car.

A Tribble Run gig is usually in the lounge of a hotel in the semi-industrial clutter on the periphery of downtown, out by the auto body shops, dusty teriyaki joints and doomed nightclubs with names like Hot Pursuitz and Karma.

This was my second Tribble Run as an opener, contracted to do 30 minutes of jokes before the headliner. That night’s show took place in the expansive ’80s-era lounge of the hotel where we were staying, a chain I thought had gone out of business a decade earlier. On the way from my room to the show, I bumped into the headliner in the hallway. He was lugging an overstuffed Navy seabag full of merch—he sold four different joke T-shirts to make the run semi-profitable. As an opener, I barely made break-even money once you factored in gas and food, and the headliner didn’t do much better. He really pushed those shirts. The last 10 minutes of his set each night was devoted to his “merch pitch.”

We performed well for a sparse crowd of increasingly drunk locals and random hotel patrons. After the show, I stuck around for karaoke. A twentysomething man approached. He was wearing the standard weekend attire of a basic white dude from that area: construction-grade jeans, clean work/casual boots, collared shirt, new baseball cap, neatly trimmed goatee.

We made small talk. Sometimes when you have a decent set on the road you’re a mini-celebrity for the rest of the night. People want to hold court with you and get news of the outside world.

“You smoke weed?” he asked.

“Yeah,” I said. Sometimes audience members give you free weed after the show, as a sort of tip, especially if you have weed jokes in your act.

“We’re going to my buddy’s place to do knife hits. You wanna do some knife hits?”

(Knife hits are a way of smoking bud, hash or resin by pressing it between the tips of heated-up knives. This was before legal pot, when you’d scrape your bowl and smoke the resin during lean times.)

“Hm, maybe,” I said. I didn’t want to be rude but I definitely wasn’t going to leave the hotel where I was getting drunk for free to do knife hits with a stranger. Never let them take you to a second location.

“OK man, I’ll check back with you before I leave.”

A beer or so later the guy returned.

“Hey man, we’re headin’ out. You wanna come? Check this out—my buddy’s already getting’ started.” He opened his flip phone to show me a picture of a scary-looking bearded guy standing in a rural backyard holding a big ass survival knife.

“I think I’m gonna stick around here for awhile.”

“Alright, well give me your number and I’ll text you with directions in case you wanna come out later,” he said.

“Um, OK?” I handed him one of the business cards I just had printed up with my headshot on them, the true mark of a comedy newbie.

The next morning I got a text from an unknown number.

“Hey faggit you wanna mess with Linnea we r gonna have a problem. Or didn’t she tell you I was her boyfriend”

I hadn’t messed with Linnea. I texted back: “Who is this”

Since I was on my way out of town headed to the next stop on the run seven hours away, I replied: “Red Lion Inn Room 432. I’ll be waiting!”

I never heard back. A month later, I started getting random texts from that number. I’d somehow been included in a group text in which they were sharing racist Obama jokes. I didn’t respond, but I lurked. The occasional texts were a little porthole view into the world of Pocatello.

Eventually, they stopped. I haven’t been back.