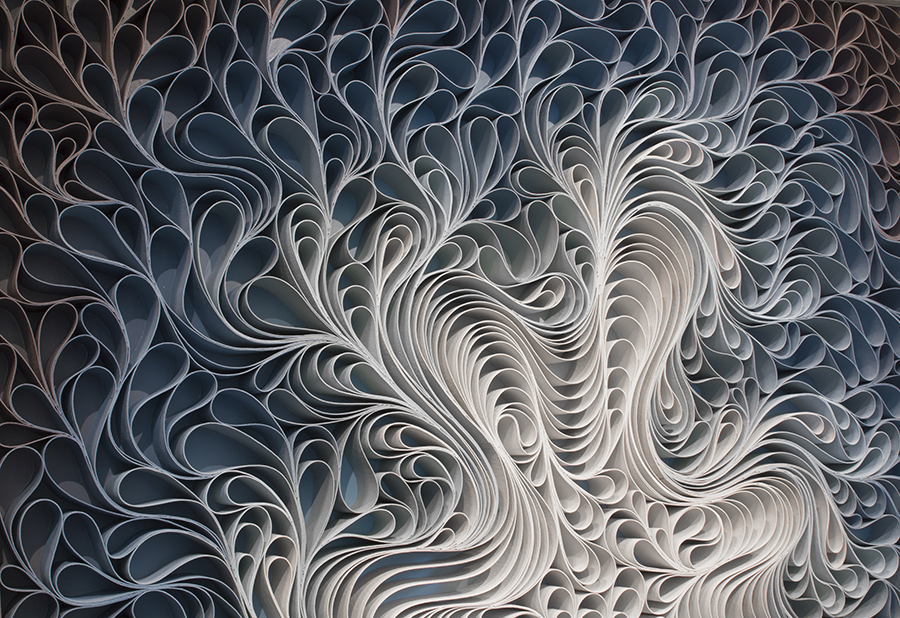 Traveling the contorted band of coastline that encircles Whidbey Island opens a window to the work of the artistic duo known as Stallman. Like the tumbled ribbons of topography looped into place by seismic hands, land squeezed on all sides by the coursing frame of the Salish Sea, their sculptural canvases contain the captured energy of the living forces that birthed them. This sense of natural awareness, channeled through their abstract lens, is perhaps Stallman’s defining characteristic.

Ten minutes inland from the Clinton ferry terminal, in a room in the island’s creaky, historic Bayview School building that Stallman has occupied since 2013, Stephen Stum and Jason Hallman examine a curly gathering of canvas that, once it leaves their workspace, will likely travel the world. The in-progress piece, something like a shocking-blue row of gills made of acrylic paint-soaked raw cotton canvas, sits about five feet wide and reflects the tropical palette of another island they’ve spent a significant amount of time on: Hawaii’s Big Island.

“We’re very connected to the water here,” says Stum. “Our work is so fluid. It’s hard to not see and be inspired by the way water reflects light.”

Like a magic eye, you might glimpse ruffled clouds, fire-streaked water, pleated dunes of ash in their designs, so much so that they feel like an homage to their surroundings. “Autumn’s Light,” “Oasis in the Deep,” “Embers Igniting”—the titles of their pieces are vivid depictions of natural phenomena. An emotional spectrum bleeds through in the nuanced color pallets, highlighting the intense detail that makes each sculpture an entirely consuming experience.

Since they came together six years ago to form Stallman, Stum and Hallman have created hundreds of works using their “canvas on edge” technique. Their unique style—and their moniker—suggest a natural collision of two artists. Hallman, who until recently had co-owned the modern furniture store Area 51 on Capitol Hill, had been working with excavated paintings, carving through layers of glued-together canvases, when he met Stum. A onetime student of industrial design and fine art at the University of Washington, Stum was producing laser-cut sculpture. The hands-on physicality of Hallman’s process met Stum’s eye for details and they began experimenting together.

In the schoolhouse, the artists joke that demand from the global market has left them with only this half-finished piece to show me. The pair has shown in galleries in Miami, Chicago, New York, Houston and Dallas and have won placement in the Facebook collection in California as well as the Microsoft art collection in Bellevue. But this year begins a push farther outward: In January, they sent a series of their work to Eternity Gallery outposts in Singapore and Miami, with plans to show at Eternity’s sister gallery, Opera, in Dubai, Paris, London and Hong Kong later in the year.

In fact, Stallman has pulled away from the Seattle market almost entirely (aside from isolated deals, they aren’t currently showing anywhere in the region), more out of necessary redirection of time and resources than disinterest in the local art scene. Regardless, the expansion of their physical reach mirrors their ambition.

“We’re trying to diversify our gallery list, because each art market has a different feel, different aesthetic,” Stum says. “By doing this, we get to be full-spectrum artists doing whatever we want, and there’s a place for each of those ideas, those palettes, those compositions to go to.”

They measure and cut each canvas with their own hands, or those of a small team of fellow artist employees, into strips just wider than a leather belt, then saturate them in colors, from wildfire orange to subtropical turquoise. Once dry, the thin edges may be painted with a contrasting hue to add another element of detail. Laid over a painted backdrop within the wooden frame in fractalled patterns they call “elevated line drawings,” the colors stretch and breathe, always shifting with the light, glued in place but never fully settling. The duo attributes much of their inspiration to the color theorists of the ‘50s and ‘60s, specifically Josef Albers, the German American painter and art theorist who argued that color, due to its inseparability from its surroundings, is the most relative medium in art.

“It’s just a millimeter of color, but when you get thousands of strips in a piece with that color, you can create incredible, soft gradients just adding one little strand of color at a time,” Stum says.  “The background will blend those two colors, so you’ll see a third color that doesn’t actually exist in pigment. But it exists in reflection.”

Last September, Stallman opened a second, larger studio a couple miles across the island, in an old middle school building, in part to handle the increase in production; they can now paint eight lengths of canvas at a time instead of two. The move also served a more therapeutic purpose: After being together as a couple for five years, living and creating as a unit, Stum and Hallman separated a year ago. They continue to co-create and show art together but they’re using the opportunity to expand to give each other the individual space they need.

“We met as partners, and with anything, there’s evolution,” Stum says. “Taking the time and allowing things to grow helped us with our creativity, our process and our sanity as humans and creative people. It’s not often people work together on creative projects, so we know that it’s rare, and it’s rare for a reason.”

The process may have changed, but the change only adds another dimension to their work.

“And that’s some of the best art we’ve ever created, with the evolution,” Hallman says. “Things are always changing, and that’s a guarantee in life: It’s never gonna stay the same.”