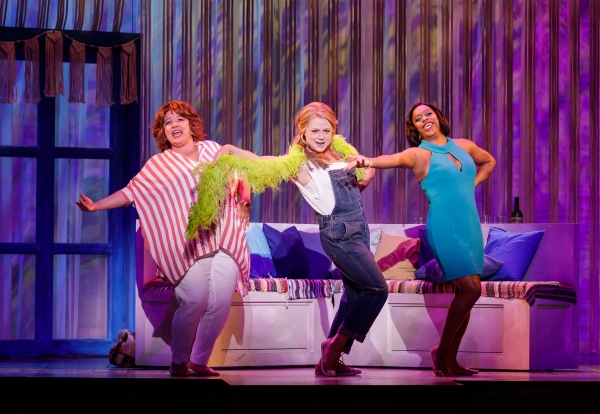 Here we go again. Mamma Mia!, the smash-hit musical written by Benny Andersson and Björn Ulvaeus of ‘70s Swedish pop group ABBA using the band’s catalog, is on stage at the 5th Avenue Theatre.  The musical ran on Broadway for 14 years and has been running in London’s West End for nearly 19, and although the show’s script and songs are intact, this production features new design, new staging by the 5th Avenue’s producing artistic director Bill Berry and choreography from Bob Richard. A rom-com romp with mother-daughter drama and a surprise twist, the show is surface-level entertainment, but that’s not necessarily a bad thing.

Sophie Sheridan (Eliza Palasz) and Sky (Jordan Iosua Taylor) are getting married on a remote Greek island where Sophie’s mother Donna (Kendra Kassebaum) runs a small taverna and tries to convince everyone that she doesn’t need a man in her life. After Sophie gets ahold of her mother’s diary and learns that there are three possible men who might be her father, she surreptitiously invites them all to the wedding: Chaos, confusion and a whole mess of crossed wires ensue.

As Donna, Kassebaum navigates the stage with a mix of a humor and pride; her character arc, although simple, is the most compelling. When we first meet her, Donna is a frazzled, anxious single mother trying to hold her world (and her daughter’s) together with a tough edge and can-do attitude. When three of her ex-lovers appear on the island, we see a woman forced into vulnerability by sentiment, and her internal battle brings a real humanity to the character. With her strong voice, Kassebaum commands the stage and belts out campy pop tunes and emotional ballads with equal skill, which is more than can be said for a majority of the singers, especially the men. Donna’s two best friends Tanya (the crackling Lisa Estridge) and Rosie (Sarah Rudinoff) are equally resplendent when they sing, and Estridge’s performance of “Does Your Mother Know” is a show standout.

Scenic designer Jason Sherwood takes a simple approach, creating a striated backdrop in shades of blue that suggest both mountain ranges and ocean waves, an overall effect that reminds us that these characters are on an island, removed from society at large; they have their own set of rules and various motivations for escape, whether that be to or from the island. Subtle patterns and colors—Greek key, blue and white—hint at the setting without overdoing it. An elevated catwalk with stairs leading down to the stage suggests a dock, and lighting designer Mick Baldassari uses washes of color on the backdrop to reflect the changing moods on stage. Costumes (Rose Pederson) are another new element of this production, and aside from the dazzling disco-inspired getups that appear for the ABBA sing-along at show’s end, they fall pretty flat. For the most part, they’re normal pedestrian clothes you’d see on anyone vacationing on a beachy island. They make sense but don’t impress, which is a frustration that cropped up more than a few times during the show.

Maybe it’s the flashy ABBA legacy—the group’s sequined, colorful disco costumes and showy performance style are synonymous with their name—but this Mamma Mia! felt largely underwhelming. Much of the dialogue was delivered in a forced or overly cheesy manner, the group dances had a high school musical feel and there were only a few points where an actor had enough musical prowess to transcend the stage. If you’re looking for theatre with a deep intellectual takeaway, sit this one out. But if a night of toe-tapping, hum-along-under-your-breath entertainment is appealing, then this production of Mamma Mia! is right up your avenue.