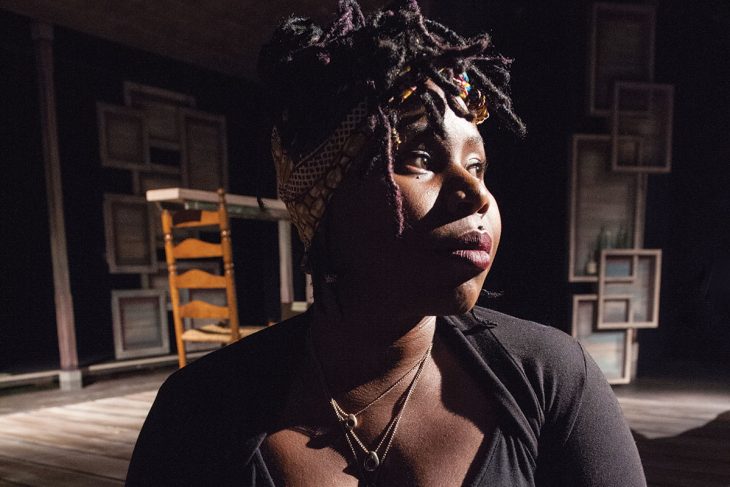 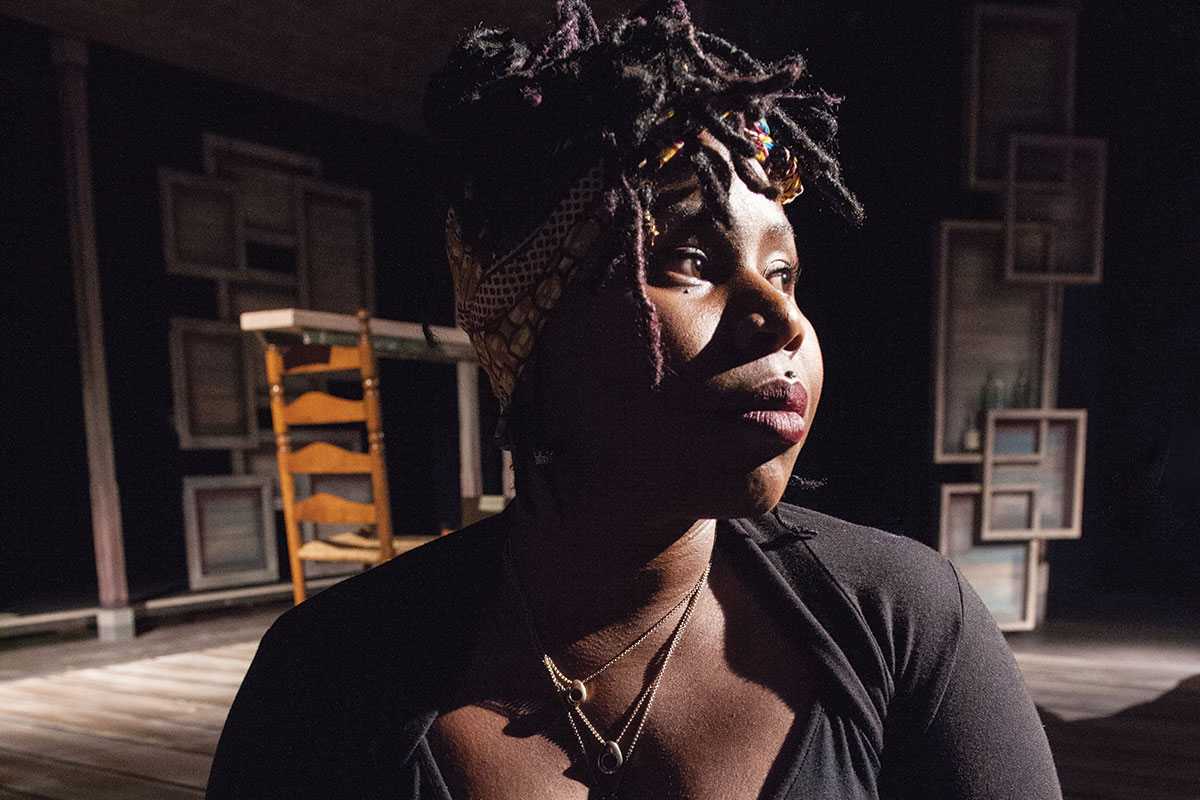 Malika Oyetimein hasn’t been sleeping much. Tech rehearsals for an adaptation of Maya Angelou’s I Know Why the Caged Bird Sings are underway, and when she’s in tech—those long, laborious work days that finally knit the many elements of a play together—her director brain never shuts off.

“You’re like, Oh, maybe we could move him here…or maybe I could move him downstage…I don’t know…” she murmurs, laughing, perched sideways on a chair in the lobby of the Center Theatre. If Oyetimein is weary she doesn’t show it, nor does she mask her exhaustion with artificial pep. She doesn’t have to: To command a room, she has only to tap into the natural warmth and engagement that fuels her every day and is the driving force behind her increasingly brave, emotionally ablaze productions. She makes eye contact and she means it.

Minutes earlier, Oyetimein was in a dressing room, laughing with her cast members and getting ready for this magazine’s photo shoot. “Alright mama, sorry, I’m coming,” Oyetimein says to me, padding across the Center Theatre stage in her sock feet, en route to her lobby perch, greeting everyone who streams past us as they filter back to rehearsal from break.

It’s the company’s first day in the theatre after weeks of rehearsal, and the cast mills about the stage, getting comfortable, feeling out the dimensions that have until now existed only as taped-off space in a rehearsal room.

“Is this my table?” Oyetimein asks the theatre at large, delighted, standing over a small wooden table with a lamp, set in the middle of the audience. Her stage manager confirms that it is, eliciting Oyetimein’s general affirmative response, “Amen!” She quickly abandons the table as she drifts around the space, pausing for an earnest check-in with her cast—How y’all doing?— before they get to work. Then Caged Bird begins.

“This train is bound for glory,” sings the entering cast, first syrupy slow, then suddenly electrified with a church-like spirit. “What you lookin’ at me for? I didn’t come to stay,” recites the actress playing young Maya Angelou, as some confusion about chair placement breaks out among the rest of the cast and the room slowly fills with the muted, familiar tones of tech chaos.

From the edge of a seat in the house, Oyetimein calls hold, so softly it seems her voice must vibrate at a special frequency to account for the speed with which everyone stops in response. Such unassuming strength is hard-won.

“To our deficit, it’s often assumed that being strong, assertive and direct is magically easy for Black women,” she says. “It’s not. We’re all women. We all are raised to be quiet or demure or we’re all silenced, and then we all have to find our voices. For me and other Black women, usually our strength comes out of some sort of tragedy or oppression. I can track the growth of my voice, and I feel like the markers where my voice has gotten steadier, firmer, clearer and more direct have come from having to fight for what I needed.” 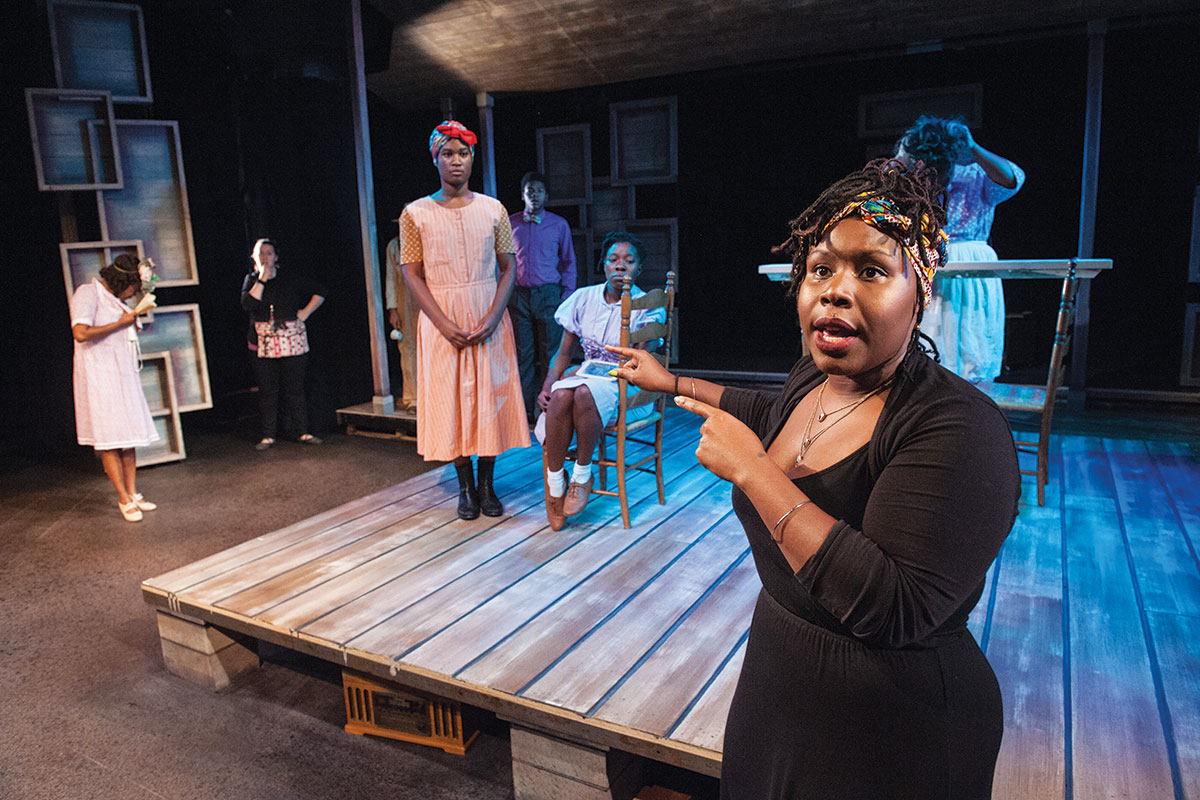 Oyetimein moved to Seattle in 2014 to get her MFA in directing under Valerie Curtis-Newton at the University of Washington. When I interviewed her for this magazine’s 2016 Future List, Oyetimein was halfway through her program, having captured local attention with a stellar piece at Intiman Festival’s 2015 Director’s Lab—a sensitive production, hilarious and human, of Robert O’Hara’s Bootycandy.

Oyetimein arrived at UW with years of stage managing, assistant directing and directing experience, including a Fellowship at Oregon Shakespeare Festival and a spot in the 2013 Lincoln Center Directors Lab. She wasn’t then, and isn’t now, shy about sharing the moments that strengthened her—like being a talented kid who was always cast as a maid in plays at her largely white South New Jersey high school. Pivoting to writing and directing, controlling her own work as much as possible, made sense.

“What was apparent from the beginning was that she has a point of view about her work and the world, and what we focused on in her three years was how to make that point of view clear,” says Valerie Curtis-Newton, Oyetimein’s mentor and teacher turned colleague. What surprised her, Curtis-Newton says, was how willing Oyetimein was to “be out in the world,” to reach outside a drama department that didn’t always have the diversity she needed to make the work she wanted to make.

“She very much wants her art to be part of making change,” Curtis-Newton says. “She has a tremendous love for the telling of Black stories.”

Given the schedule she’s been keeping recently, it’s shocking that Oyetimein isn’t napping where she stands. Caged Bird, by her count, is maybe the tenth back-to-back show she’s worked on in the last calendar year—and she also earned her master’s degree in June. In 2017 alone, she’s helmed Kirsten Greenidge’s Milk Like Sugar at ArtsWest, a thoughtful, realistic almost-comedy about Black teenage girls who make a pregnancy pact, and Robert O’Hara’s Barbecue on the Intiman mainstage, a zippy head-spinner about race, family dynamics and fame. Then there was Hoodoo Love, poetic and supernaturally tinged, about a young Black woman hoping music will free her from a cruel life in 1930s Memphis, and now Caged Bird.

Freelance directing is a hustle. There is something maquette-like to a director; an immutable moral and aesthetic core that must also remain externally pliable, responsive to the needs of actors and designers, adaptive to the distinct culture of each new theatre company that hires you.

As she works with her cast and crew, Oyetimein is authoritative and intimate, one minute curled up in the seats talking to her lighting designer, the next striding the stage chatting about chairs, the next sitting deep in conversation with an actor, heads bowed together like old friends at a bar boring into life’s deepest problems. People are constantly coming up to her with questions.

“One of my favorite lines in rehearsal is I don’t know, y’all,” she says. “Which is funny because it’s often followed up with, that ain’t it.” Oyetimein knows exactly what each moment in the play needs to do, how it functions in the narrative and emotional storytelling. She just doesn’t always know exactly what each moment looks like, and she’s open to suggestion. “My casts know that I’m not afraid to say I don’t know or I was wrong, give me a minute to figure it out, or, what do you think? The room has to move like that or else the pressure to know everything is overwhelming. How do I know? I’m not God. I’m a director.”

Collaboration is critical, but someone needs to steer the ship, answer the questions, maintain the vision, inspire greatness in others and filter every opinion, design idea and actor impulse into a cohesive, compelling whole. Directing is more than just moving pieces around, and the buck stops with Oyetimein.

“My trust in myself, in my skill set and my artistry, are things that absolutely grew because I was doing show after show after show after show,” she says. “If you don’t trust yourself, you’re dead in the water. If I’m always looking for validation or affirmation, then I’m dead in the water. It’s also because I’m blessed to be working so much, because there’s no way to trust yourself other than being given the opportunity over and over again to test yourself. What can you do? How can you get stronger? What can you show the world?” 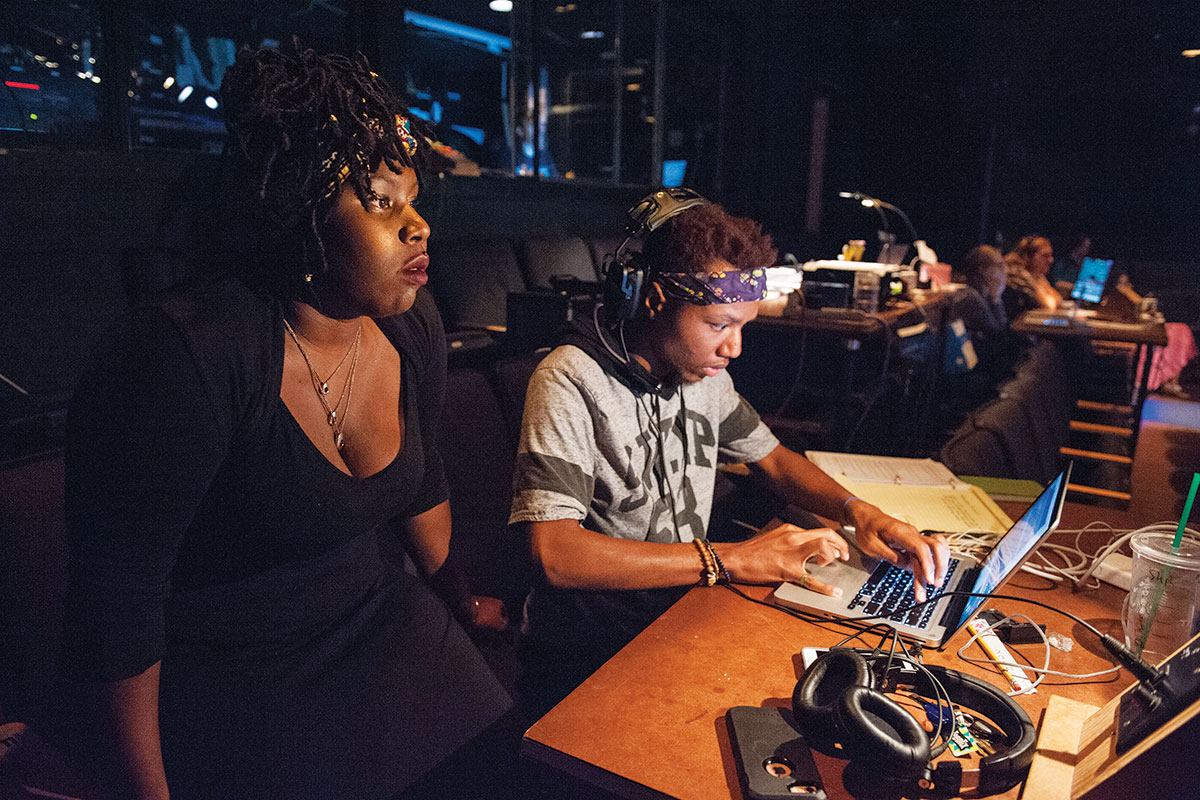 As the old saying goes, directors get all of the blame but none of the credit. See a great production, and in a review the director is usually reduced to having given the show “good pacing.” See a bad show, and the bloody carcass will be laid at the director’s feet. Oyetimein weathers that storm by reminding herself who she made the work for. Milk Like Sugar, she says, was for the girls in the play, “the 16-year-old Black girls who don’t get to see themselves, who get categorized as fast and loose, as gold diggers only wanting money, and never get to explain why or talk about being lonely or anything like that.” The show’s hyperrealism gifted audiences the hyena-like laughter of three young women and intimate scenework between a girl and her distant mother in an uncompromised Black American vernacular.

Hoodoo Love was different. “I specifically made that play for my white Seattle audiences,” she says. “I had so many conversations with the design team about, how do we not make this an experience where white Seattle can look at Black pain from afar? That’s why it sat in your lap, almost literally at times.” Moody lighting and liquid language belied the story’s undeniable, visceral brutality, from which Oyetimein didn’t shy away.

After her work on Caged Bird wraps, Oyetimein will assistant-direct Ragtime at the 5th Avenue Theatre, working with Peter Rothstein of Minneapolis’ Theatre Latté  Da. She’s constantly hungry to learn, and more musicals are high on her to-do list. “I want to do The Color Purple,” she says. “I’m gonna put that out there! A Black woman has never directed The Color Purple that I know of. So consider this my audition.”

Also on her upcoming agenda: a play workshop at the University of the Arts in Philadelphia and Baltimore by Kristen Greenidge at Cornish. After that, who knows? Her close relationship with her family makes Philly a tempting choice, but through technology, all regional theatre directing careers are possible. Oyetimein knows now that she can’t take every project she’s offered—doing so is bad for her artistic integrity and her health, and taking a project out of fear she won’t get another is not a recipe for a successful show.

Of course, she can do Chekhov or Miller—storytelling is storytelling, and she’s trained and she’s capable. “Right now, I’m doing the work I want to do,” she says. “Because I wear my mission on my sleeve, I think I’m being offered things that align with my vision, the type of projects that turn me on and light me up. This season has been filled with Black female leads and Black women in the center as protagonists, and nothing could make me happier.”

I Know Why the Caged Bird Sings runs through Oct. 15 at Book-It Repertory Theatre