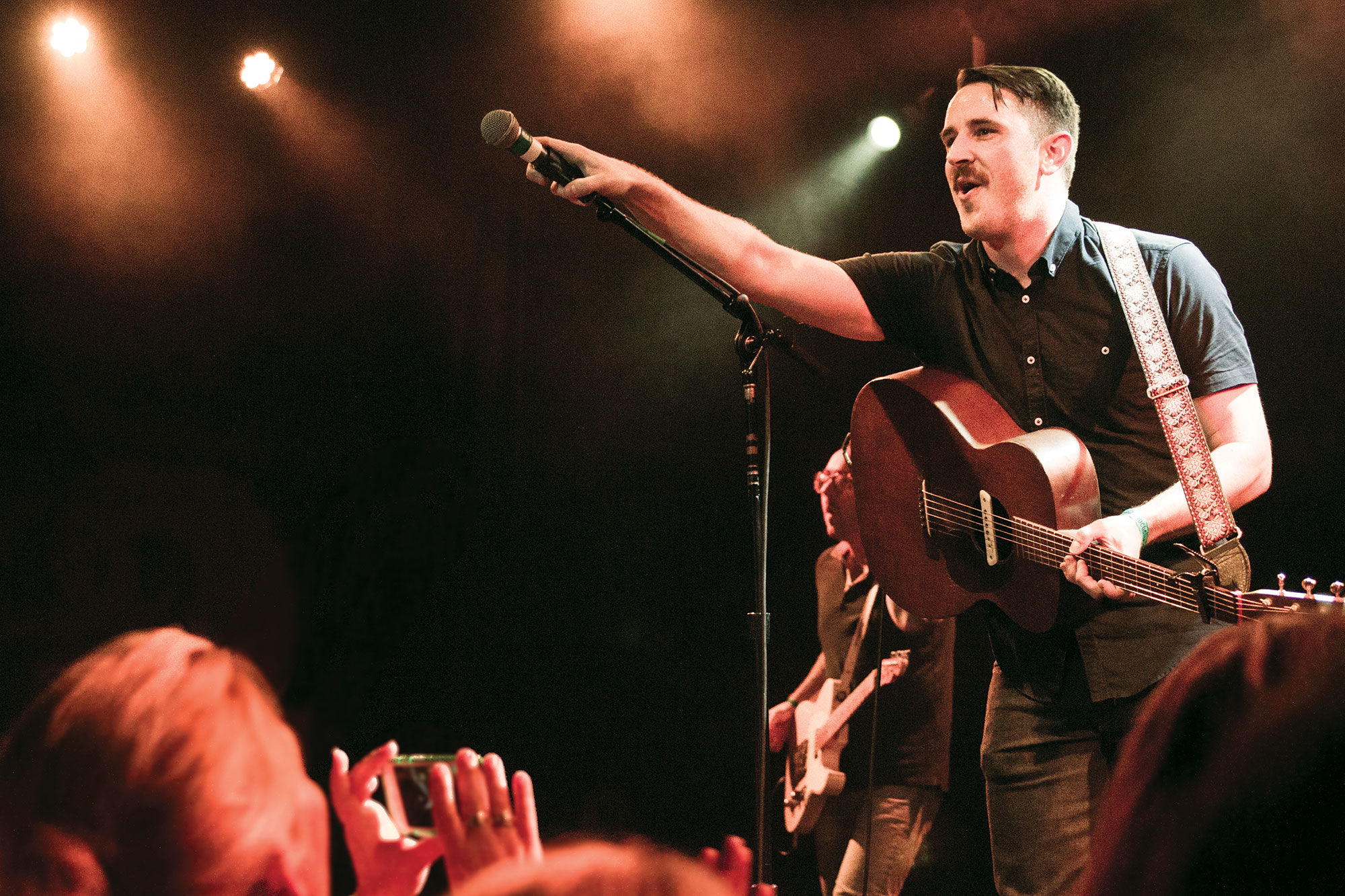 Kris Orlowski wooed the crowd at Crocodile during the May 6, 2016, release party for his album Often in the Pause. “I haven’t been as much of an artist as of late,” he says.

San Francisco is dead. The songwriters are all gone.

This dramatic pronouncement comes from a music-industry veteran who I’ve known for 15 years, a friend who’s invested his life and livelihood in music. This guy started his career in the early 2000s managing scrappy indie-rock bands in SF, moved to Los Angeles to open his own management company and relocated his business back to the Bay when he wanted to start a family. Now he can’t find indie-rock bands to work with because, like poets and activists and people of color, the indie-rock musicians have been priced out. The shreds of the music community that hung on amid San Francisco’s ongoing transformation have been vaporized by the city’s exorbitant cost of living.

The songwriters left, he tells me on this summer evening, as the EDM artist he currently manages plays to a sold-out crowd at Marymoor Park. Their lifeblood drained from the scene. Now that scene is dead, and along with it the city itself. He’s looking me in the eye and I can see it hurts him to say.

I’ve heard this story about SF for years, usually in the form of vague, schadenfreude-y mutterings and social media posts from fellow Seattleites. Word is that our older, richer sibling-city to the south sold its soul to the Googles and Twitters and Ubers, coughed up its spirit into the pockets of the oligarchs and brogrammers, rolled over as its once-multivalent cultural landscape was flattened.

Lately, I’ve heard similar mutterings about Seattle’s music community, and what I once would’ve considered an overly cautionary warning now feels like a premonition: When the songwriters leave, the soul of a city leaves with them.

Songwriting is bedrock creativity, an extremely low-overhead art, and it benefits from a wide variety of money-making opportunities on tour, online and on stage. It may be the art form most insulated from today’s economic pressures, which makes an exodus of songwriters that much more concerning.

An SF-level extinction is unlikely here, I tell myself. Seattle’s music scene is indelibly woven into the fabric of the city. From the earliest days of white settlement through the heyday of vaudeville, when barroom singalongs and all-night public dances were played by live bands, musicians were at the core of Seattle culture, such as it was. The Musician’s Association of Seattle, the local branch of a national labor organization, was founded in 1890, predating the Longshoremen’s Union by decades. Seattleites love to recite the litany of our world-famous, hit-making icons as a form of civic pride: Ray Charles, Quincy Jones, Jimi Hendrix, Kurt Cobain, Chris Cornell.

Music is fundamental to Seattle, to its self-perception and, since the globe-conquering grunge era, to the way outsiders perceive it. Add to the litany Fleet Foxes, the Head and the Heart, Macklemore, Odesza. All these years later, music remains Seattle’s most meaningful gift to the world.

Specifically, independent music. Music that reflects our diverse points of view, made by people of Seattle for Seattle. People who choose Seattle as their muse and their incubator, and whom Seattle nurtures in turn. Sub Pop or Suicide Squeeze or Barsuk gives them a home, or at least one to aspire to. Seattle’s dive bars and underground clubs give them a stage and Seattle audiences give them attention and appreciation. Since forever, the city has supported a lifestyle that allowed musicians to live and create here and audiences to absorb and enthuse here. For most musicians that’s been enough. We have our own self-sustaining system that belongs only to us—not to the entertainment factories of Los Angeles and New York, not to bougie San Francisco.

Around the musicians themselves a robust industry thrives, an ecosystem that presaged the coming of big-money enterprises like aerospace, coffee and tech. It goes back generations and still exists today: concert venues and performance halls, commercial and public radio stations, record labels and recording studios, annual music festivals, live music every night of the week every day of the year. According to a Musician’s Association report from last year, Seattle’s music industry employs 16,600 people in Seattle and generates $1.8 billion in economic output. It’s not going anywhere.

This is what we tell ourselves.

In 2017, Seattle’s skyrocketing cost of living is forcing huge swaths of regular people to uproot. The school teacher, the bus driver, the barista—they’re barely hanging on as a wave of unaffordability crashes over the city. Songwriters don’t need much to operate; the practice of writing songs remains a simple, solitary endeavor. But the traditional means of music distribution have been disrupted by the Internet, complicating the process of making a living, and even as Seattle booms with unprecedented musical styles and sounds, musicians, too, are confronted with an unprecedented economic reality.

Seattle has lost musicians to other places before, of course, but this creative attrition was balanced by the historic pull of Seattle’s creative community. If the balance continues to tip into unaffordability, history will become legend and a once-vibrant music scene will lose the fight.

Our sound, our scene represent the experience of this place, not just to ourselves but to people everywhere. It’s our chief export, culturally speaking, connecting us and our specific sensibility to the wider world. Music is so essential to this place, such a profound part of its ongoing narrative, that it’s impossible to imagine this place without it.

Erin Austin is a goddam songwriting machine. She’s been writing songs since she was a kid; she writes them as a matter of habit now—unconsciously when she’s putting away the dishes or watering her plants—and also because it’s her job. She’s honed this skill, and all she wants to do, all she can do, is use it.

And she does. She’s played gigs all over the U.S., both as a solo artist behind a piano and with her band OK Sweetheart. She’s had songs placed in commercials for Nissan and Zale’s (which ran during the 2014 Super Bowl), in the 2012 Mark Wahlberg flick Contraband and all over MTV. She contracts two different licensing companies, one in LA and one in New York, to place her songs in commercials and shows and films and online. She’s hired a pair of Seattle-based managers to explore new money-making avenues as well assist with her nonprofit and community-outreach work. She collaborates with other musicians constantly, expanding her network and her reach. At the time of this writing she’s in Oakland, Calif., co-writing with Josiah Johnson of the Head and the Heart, before heading to New York for a series of gigs and business meetings.

It’s a lot, but this summer Austin’s songwriting engine was truly running in high gear. As the first-ever musician-in-residence at the Sorrento Hotel, Austin spent four to six hours a day, three days a week, for three months straight, hunkered down in the hotel’s writing room or at the baby-grand piano in the cozy, open-to-the-public Fireside Room, working on songs. She came away with dozens and dozens, most of which we’ll probably never hear, many of which will go to her publishing agents for possible placement. Those agents work for years behind the scenes, trying to broker lucrative placement deals for Austin’s self-penned, self-sung songs. If not for those occasional placements and a fortuitous long-term house-sitting situation, Austin’s life, and her creative output, would flounder.

I mentioned the report from San Francisco to Austin and ask her if such a thing could happen here. It already is, she tells me. She connects me to a private Facebook group called Seattle Musicians Planning to Eventually Move to a More Affordable Place, which was started by a songwriter named Matt Batey in July and now counts 279 members. At the top of the timeline is a pinned survey asking other cities people are considering (Tacoma ranks number one), followed a photo of Batey’s Volvo outfitted as “a temporary dwelling” in case he’s priced out of his apartment and desperate/relieved discussions about Gold Bar and Detroit and Everett.

Batey, for his part, is resigned to the inevitable. Despite a pending deal with a prestigious local label to release the first LP from his band Ruler, and an entry-level job as a compensation analyst at a law firm in Georgetown, he says there’s no longer a place for a “poor person” like him in Seattle. He’ll live in constant fear of being displaced or he’ll take the initiative to re-place himself, go to the next place he can find other eager musicians to play with. His only regret, he says, will be losing the tight-knit group of friends and collaborators he’s accumulated in the last 12 years, people willing to sacrifice as much for music as he is.

As we talk, Batey apologizes more than once for sounding like “a whiny millennial,” someone who wittingly chose to dedicate his life to the loony pursuit of writing really good songs. But nobody anywhere should have to justify their passion, or for wanting to succeed at it enough to support themselves doing it.

Batey and his cohort are part of a long lineage of lifers who are forced by an apathetic market to remind the public of the value of their work. Ayron Jones found mentorship in the previous generation of Seattle-music success stories like Sir Mix-a-Lot, Duff McKagan and veteran drummer Barrett Martin, and they instilled in Jones a crucial lesson: You decide the value of your music. Establish your worth and work to elevate it from there. Your music is your business and you must master both to survive.

Over the past year, Jones has enjoyed the greatest financial success and stability of his career. Two days before we talked he and his band had opened for Guns N’ Roses at the Gorge, and they were set to embark on a six-week nationwide tour with Theory of a Deadman. Like those who’ve guided him, he’s compelled to pay it forward to the next generation. It’s OK to sacrifice for your art, he says, but do not fail to recognize and believe in your own value.

Confidence isn’t always enough. Kris Orlowski has had an album in the can since January—a collaboration with the producer/singer Budo—but he hasn’t had time to release it because his new job at Amazon keeps him too busy with work and travel. Orlowski knows that a high-paying, important-titled position at Seattle’s number-one job creator is a privilege. But he’s conflicted about giving up time to write; now there’s less of him to give to fans. As one of Orlowski’s peers tells me later, “that’s the death of an artist right there.”

Each of these folks provides sobering perspective and no small amount of alarm. SassyBlack is more pragmatic. Pointing out her Blackness, her female-ness and her queerness, she tells me that for some people Seattle has never been overly welcoming, musically or otherwise. We romanticize the past, but even in the primacy of grunge—or Jackson Street jazz or classic rock for that matter—few musicians found security in their chosen profession. It’s always been a struggle, she says, with artists and creative types exploited by economic forces they have little power over themselves.

True, we’ve been in this situation before. But today the stakes are higher, the economics more daunting. If the infrastructure that took so long to build, that has supported the music community for generations, isn’t enough anymore, the songwriters will find someplace more accommodating, and other artists will follow. We’ll be left with culture imported from elsewhere, mass-produced for mass consumption. For a city whose music has given the world so much joy, that’s a tragic scenario made even worse by a shitty soundtrack.