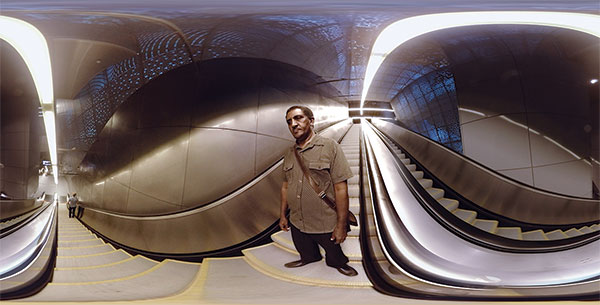 With accessible virtual reality on the horizon, filmmaker Steven Schardt explores the narrative potential of this new technology.

Auto is, I hope, a sign of things to come. Directed by Steven Schardt, the 11-minute VR film just had its world premiere in Tribeca Film Festival’s Virtual Arcade in late April. It’s simple and naturalistic, a narrative film that insists on storytelling over tech thrills or heavy messaging.

“It’s a traditionally told cinematic story, of which there are very few examples in the current [VR] universe,” Schardt says, and that’s with good reason. At this point, VR is exponentially more complicated to make than a traditional film. “Unless you have some idea that you have to do in VR, it’s just way too hard,” Schardt says. “Why put yourself through that unless you really want to do it this way?”

The story of Auto, inspired by an Uber experience Schardt had, is about an Ethiopian-born Seattleite, Musay (Desalegn Kassa), who can’t get a job as a driver. In this near-future, he starts working—which means sitting and pushing buttons—using his son’s professional account with a self-driving car company. When he picks up a couple (played by Emily Chisholm and Eric Riedmann) going from South Lake Union to Madrona, things go wrong. Musay wants to drive, but the car doesn’t need him and his customers would prefer a car without a human driver at all.

The making of Auto stretched out over some 18 months. Schardt learned as he went, building computers and camera rigs, staying on top of constantly improving technology. He and cinematographer Nathan Miller test-shot everything to figure out camera placement, then figured out how to cut between scenes logically and effectively, to gently guide the viewer through the story. Then there’s extensive post-production to blend the images from multiple cameras into one spherical whole. To create a 360-degree world, every shot requires visual effects, at the very least to remove the camera from view.

The result is staggering. I’m sitting on a couch at Workhouse Creative, a film studio on the edge of the Central District where filmmaker and Auto producer Megan Griffiths is editing an unrelated project. She sets her phone inside a simple black plastic headset, hands it over so I can strap it to my face along with some noise-cancelling headphones, and leaves me to settle into Auto, cocooned in my own personal story world. Suddenly, though I know she’s working at a nearby computer, Griffiths could be a million miles away.

Musay and his wife are arguing with their son, the Amharic language lilting into my ears, making me turn my head toward the speaker. The passenger couple chats uncomfortably in the back seat of the self-driving car, making me twist around to try and take in the fullness of the awkward situation.

VR’s initial sensation can be unsettling, even nauseating. But once your brain is properly oriented, it’s capable of an amazing synthesis. At first, I watched the story in front of me, forgetting I had the agency to shift my focus. When I remembered, I overzealously investigated every space, worried I would miss some detail.

The camera slyly shifts perspectives as you join Musay’s family in his home and as you ride with him on the light rail, dejected. Then, as he picks up a (sort of) well-meaning couple who don’t treat him like a human being with skills and experience. Watching it I feel vulnerable and voyeuristic, newly connected to the local Ethiopian community. That’s a profound exchange between humans, with filmmaker as facilitator.

Schardt, a frequent Lynn Shelton collaborator and erstwhile Seattleite who’s now based in Louisville, is an amalgam of Luddite and technophile: an enthusiastic adopter of new storytelling technology with a resistance to social media and a preference for in-person conversation. Auto is thickly laminate with meta-exploration, aware of the friction between technology—“progress”—and humanity.

My reaction to VR storytelling is similarly mixed. I find the experience intoxicating, if anxiety-inducing, but am allergic to words like “cloud-based.” It makes me wonder how people on the cusps of other technological revolutions felt. The early days of film were fraught with fascination and revulsion in equal measure. The story goes that when L’arrivée d’un train en gare de La Ciotat, the short film directed and produced by Auguste and Louis Lumière, premiered in 1896, audiences were terrified, because a train was coming directly at them.

That’s where we are in the history of virtual reality. Watching Auto, or the beautiful new VR dance video released by Pacific Northwest Ballet in collaboration with Seattle company Pixvana, I’m bowled over by the sensation but unsettled by the application. The performing arts, and even movie theaters, bring us together, a mass of humans in the same space sharing breath, sweat, space, electricity. Why bother going to the ballet if something this lovely and intimate exists in my home?

This is the hysteria of unfamiliarity. One of the biggest mental hurdles to understanding VR is our insistence on thinking of VR film as film, to be written and read in the language of film. A much better corollary, Schardt says, is the novel—an all-consuming, long-form story meant to be experienced individually. (He describes Auto as a short story; it’s also good learning experience for his VR novel, which he tells me is already in the works.)

Seattle is positioned to lead the way. The city is awash in VR innovation, thanks to our glut of tech and gaming companies. Practically every tech behemoth—Facebook, Google, Microsoft, etc.—is investing massively in this arena.

“Every large company wants [VR] to be the next computing platform,” Schardt says. “And they are investing billions of dollars to make that happen. So, artists: Start thinking about it.” Video games, live performance and documentaries have proved the most obvious applications of VR so far, where your role as viewer is clear and the rules of narrative filmmaking don’t need to apply. You’re in a world, you’re exploring, your attention can go wherever it wants.

And of course, there’s empathy, a word Schardt hesitates to use in our conversation because the empathy possibilities of VR have been hyped to the point of being meaningless. “The idea that VR is an empathy machine provokes people to go out and record empathy,” he says.

But narrative VR can generate empathy just by putting you in such close contact with a subject, and the rules of that form are being written right now. Close-ups, montages, chase scenes, scene cuts—the conventions of filmmaking that we take for granted had to be invented. “What Auto is,” Schardt explains, “is trying to take film techniques and applying it to VR, in much the same way that early filmmakers held the camera up to theatre. I’m trying to hold the VR camera up to film and see what translates.”

At this point, there’s no traditional pipeline for VR films in Hollywood, Seattle or anywhere. But the market is growing: SIFF launched its VR-centric SIFFX last year, and prestigious film festivals like Sundance and Tribeca have added VR galleries to their programming, which means awards categories could arrive soon. Lionsgate Films is starting to explore the possibilities of VR and FOX is experimenting with 360-degree programming.

The possibilities are endless—medicine, education, science, art. But we know so little about how VR can—or should—interact with us as humans. Is it isolating, or a great connector? As with all things, it depends on how you use it. For Schardt, the idea isn’t to invade your consciousness, it’s to raise it.