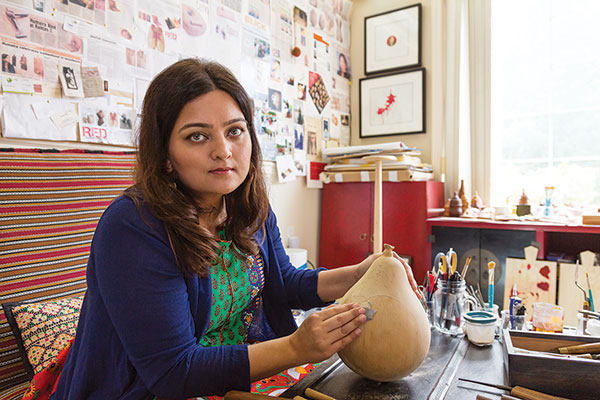 Tucked away in the foyer of Humaira Abid’s Renton home sits a full-size toilet, carved from pine and covered in gold leaf. Its verisimilitude is uncanny to the last detail: The wooden lid of the tank removes to reveal its inner machinations. Around it, a swarm of other sculptures—chains, balloons, guns, a life-size child’s swing hanging from the rafters, all immaculately rendered from wood—spills into the living room.

Abid carved the toilet, she says, when she heard on social media that the daughter of a Saudi Arabian king was gifted a solid gold toilet on her wedding day.

“What is going on when a woman is kept until marriage and then, at last, as a prize, is given a golden toilet?”

Abid was born in Rawalpindi, the fourth-largest city in Pakistan, and moved to the U.S. 10 years ago. At 40 years old, she appears to be living the American dream, with her contagious ebullience, sparkling eyes and a Washington license plate in the driveway that reads “SCLPTOR.” But the pieces she painstakingly chisels from solid mahogany and pine tell a more complex story of struggle.

Abid’s home studio is covered in hand-carved scissors, knives and other tools of violence, but the most menacing objects describe a certain kind of “spoiled” femininity— the wickedness of women who show too much skin, who cannot conceive, who bleed. Hanging prominently in the studio is a pair of carved women’s underwear, the smooth folds of which ripple in tandem with the striations of woodgrain, blotted with a rose-red menstrual stain in the crotch.

“I believe making the work uncomfortable is sometimes good,” Abid says. She’s never done anything less. Her work is a one-woman j’accuse against rules of social conduct that reduce women to mere containers and objects.

Shown widely in Europe and the Middle East, Abid worked relentlessly to establish her career in Pakistan. Since moving to the U.S., she continues to show abroad while elevating her presence in the local scene. In 2014, BAM’s biennial Knock on Wood featured an Abid sculpture of a functional tricycle, complete with wooden pedals and wheels. In 2015 her piece “Hamstrung”—a pair of wooden shoes inextricably connected by a single strand of laces—was exhibited at Out of Sight at King Street Station. Last year she presented a solo exhibit titled The Dressing Room at START Saatchi Gallery in London. For the past two years Abid has been working on a solo show that debuts at Bellevue Arts Museum this September.

“You can never do enough for people,” she says. “Someone is criticizing you no matter what you do. I’ve traveled all over the world and one thing I’ve noticed is, it’s all the same: There are always more restrictions on women. The issue is just a difference of scale. Here the women still face unequal pay and recognition.” 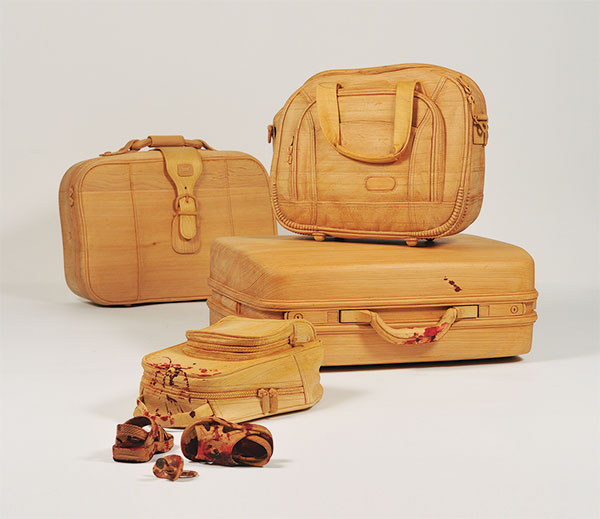 Many of Abid’s sculptures appear sweet at first glance. But on close inspection, intricate iterations of, say, tea trays with teacups gilded in gold are maligned by the creeping presence of black ants, twisted by hand from black wire.

“In Pakistan we have this courtship tradition when marriages are being arranged, where girls must serve tea to potential husbands,” Abid says. “It’s humiliating and you have to do it over and over again. You might be rejected if your nose isn’t small enough, or your skin isn’t fair enough or your dowry isn’t large enough. Women are offered as an object, along with the tea. It’s one of those traditions that I’ve never agreed with.”

After observing her older sisters endure such tea ceremonies, Abid refused to take part. It wasn’t her first or last departure from tradition.

Like many promising students in Pakistan, Abid was encouraged by her father to become a doctor. But she recoiled from the sight of blood and insisted on attending Pakistan’s National College of Arts, Lahore. In 1997 in Pakistan, art school was mostly considered a place for hobbyists—or worse, rebellious kids.

“When I decided to go to art school, it was a big shock for my family,” Abid says. “They were against it. My brother took me aside and explained that it was a place where girls would go and wear sleeveless shirts and smoke.”

Abid never took up smoking, but she did become sensitive to the stereotype of the “bad girl.” To please her father, she’d acquiesced to plenty of traditions, like covering her head until she was married. These days Abid wears her hair long and free, and often dons flowing tunics and dresses inspired by her homeland, which she embroiders herself with flourishes of gold and silver trim.

Abid was determined to prove herself in art school. She thrived as a student of miniature painting, a traditional practice descended from manuscript illustration. In her second year, she considered switching her focus to sculpture, which proved another challenge she couldn’t resist. Few women were working in the medium, particularly in Pakistan, and teachers and artists alike cautioned her about the physical demands and social awkwardness of working as a woman. Sculpture is largely frowned upon in her culture, where it’s long been suspected as a holdover from Hindu artistry, rife with idol worship and figurative scenes forbidden in Islam.

“People warned me of all these things, and I thought, Why is everyone saying this? I want to see what everyone is talking about. What’s so tough about this?”

Abid excelled in sculpture—so much so that immediately after graduating in 2000, she was hired by the school as a faculty member, becoming its youngest assistant professor to date. By then, her family had come around to her artistic career.

Still, Abid never dreamed of leaving Pakistan. In the years after she graduated, her career flourished. She exhibited in 15 countries, from Dubai to London, but wasn’t interested in establishing herself somewhere new. Accordingly, she refused to date anyone who lived abroad.

That is, until she met her future husband. Not until after she and Adeel became good friends did he make it clear that he was based in the U.S., in the Pacific Northwest. Abid was drawn to Adeel’s easygoing mentality, his conversation, love of art and the fact that his interest in marriage wasn’t about keeping a wife in the kitchen. The two married in late 2007, but Abid continued to travel extensively for exhibitions and kept her studio in Pakistan. To this day she maintains the studio and returns a few times a year to work and visit family.

Marriage brought another experience: miscarriage. Abid had three before her daughter, Dua, was born. While living through those losses, Abid found no one to talk to, not even close friends struggling with similar fertility issues. She wasn’t entirely surprised; in Pakistan women surreptitiously purchase tampons, the shame of female corporality is so pervasive.

“Women are silent because when they talk about miscarriage,” she says, “they’ll get the blame for it.”

Abid’s aunt demanded she wrap herself in magic charms and good luck amulets. When she refused, the aunt asked point-blank if she was actively trying to prevent her own pregnancy. “This is the kind of mentality I was dealing with,” she says.

No one would talk about the issue, so Abid talked about it in her work. In 2011 she made an entire exhibit about miscarriage for ArtXchange Gallery in Pioneer Square. Titled Red, the show was replete with heaps of wooden pacifiers soaked in crimson. Her piece “Breakdown in the Closet” portrayed a wardrobe filled with life-sized shirts hand-carved from mahogany; one little stained romper was crumpled on the floor.

“Women came to the show and cried,” she says. “Some would message me in private, thanking me for bringing up these issues—things as common as a menstrual cycle. That’s when I realized that was my call, as an artist, as a human: to talk about the things no one will talk about, about miscarriages, taboos, boundaries put on women.” Since then, Red has traveled to Khaas Art Gallery in Islamabad, Pakistan.

“The symbolism is in your face,” says Stefano Catalani, former curator and artistic director at Bellevue Arts Museum. He first encountered Abid’s work eight years ago when she approached BAM with a catalog for Red; he supported the idea of developing a future solo exhibition. “She’s constantly negotiating her own identity in an environment that has always forced her to negotiate identity. Not only is hers a complex, very personal narrative, she’s executing it in a medium—sculpture—where woman is traditionally always the Venus or the victim.”

In preparation for the upcoming BAM exhibition, Abid’s studio is lined with multiple corkboards pinned with portraits of refugees who came to Pakistan from Afghanistan and Syria. Their eyes are large, liquid, radiant. Pakistan ranks second in the world for sheltering refugees, hosting more than 1.5 million in 2016. Abid is applying her skill as a miniaturist by painting their portraits.

“One of the major crimes of war and migration is rape, but also there are stories that are never told—that of the children, or the women who are menstruating while walking for days on end. What are they doing to get by?”

Another series for the show addresses legislation in Saudi Arabia that recently outlawed “tempting eyes.” In a place that requires women to be covered head-to-foot, the only thing left to ornament is the eyes, Abid explains. Yet even these have been deemed criminally seductive if embellished with too many cosmetics. Abid has been carving nearly a dozen rear-view mirrors, rendered in pine, which will serve as frames for images of such eyes.

“I’ve been told that once I make this piece of art, I may not be allowed to travel back [to Saudi Arabia],” Abid says. “It’s not easy to talk about these issues. No matter what, you will likely be looked at as an outsider, even if you are trying to find solutions. But if you don’t talk about it, no one will solve it.”

She’s also carving 400 feet of barbed wire out of mahogany, the dark wood’s sheen akin to rust, which will be installed as a 30-foot stretch of fence at the museum. The craftsmanship is unbelievable. Each four-inch section is pieced together like a needle sliding into a miniature sheath. Abid has been working on this piece for two years; it took her a year just to figure out how to hand-carve the perfectly twisted replica of a barb.

The BAM exhibit has one unifying thread: continuous journeys. Not only the journey of refugees, but of Abid herself, and many other immigrants. But most of all, the journey of women.

“Women usually don’t get a chance to tell their side of the story. When they move they are so limited in the things they can bring with them. The objects they choose to bring or leave carry much meaning,” she says. “I’m a migrant. Out of choice I moved here, but many of the symbols of these journeys are all the same.”

The walls of the galleries will be as brutal as they are ornate. One will recreate a war-battered living room wall hung with framed miniature portraits, each rendered in microscopic, frictionless brushstrokes. Behind them, the walls will be pocked and chipped by the replicated spatter of gunfire. The exhibit, and the meticulously carved objects it contains, is her attempt to reclaim the stories for the people attached to them.