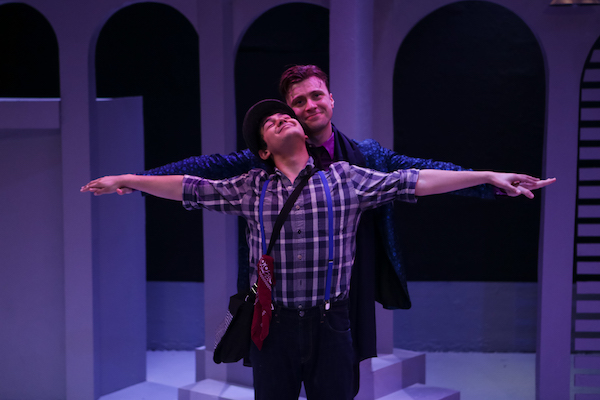 Now that we have a proud, shameless liar running the free world, I was worried it would be harder to be charmed by Dorante, the titular star of David Ives’ play The Liar. Lucky for me and all Seattle Public Theater audiences, I was wrong. When spun with a wink from laugh-out-loud physical comedy and elegant verse, a fluffy web of lies about love and life does a beleaguered brain good.

And spin this liar does. The young Dorante (Trevor Young Marston) has just arrived in Paris from the provinces, where he meets and employs the wide-eyed Cliton (a charming Rafael Molina) as his right-hand man. While Dorante can’t stop inventing, Cliton is inversely afflicted—he literally cannot tell a lie. Walking in the Jardin des Tuileries, Doronte meets and falls for the beautiful Clarice (Jéhan Òsanyìn)—or was it her quiet friend, Lucrece (Adria LaMorticella)? As the women depart, Lucrece’s maid Isabelle gives Cliton the vague identification that Lucrece is “the more beautiful of the two women,” which sets off the whole confused mess.

Add to that roiling plot: Clarice’s hot-headed secret fiancé Alcippe (Rudy Roushdi) and Doronte’s meddling mother (Julie Jamieson) determined to see him married—to Clarice, if she has her way. Oh, and Clarice’s maid Sabine, Isabelle’s identical twin (both played by Pilar O’Connell). As Dorante charges ahead in his pursuit of Clarice, his lies compound: military exploits to charm Clarice, a fake pregnant wife to throw his mom off the match-making warpath. And yes, it all ends happily ever after.

“Champs Elysées, my friend, lies thataway
Unless the Louvre has mouvred since yesterday.”

Ives’ version hews to the original time-period, but Sieber and company vault this story forward into the 1960s, giving it a decidedly One Man, Two Guvnors feel, and letting costume designer AliRose Panzarella go big with her period, eye-searing creations. A few go too far in signaling “look, this guy is funny!” but they all pop against Catherine Cornell’s neutral, functional set.

Though silly on the surface, well-executed verse comedy is really hard, and plenty of this cast has the chops to do it. Marston, Roushdi and LaMorticella are particularly adept at blending their facility with language with highly-specific physical comedy. Sieber is a skilled clown himself, with an undeniable grasp on the precision required to create hilarity. Some actors execute better than others; a couple act with their hands, and the extraneous, vague movements undercut the clockwork on which so much of the comedy rests.

From the beginning—bear with me here—this Liar could use a bit more clarity. The very first meeting between Dorant and Clarice, a moment of love-at-first-sight proportions (at least for one of them), didn’t quite land, which made the resulting comedy of errors confusing, and not in the way it’s supposed to be. Comedy of misidentification only works when we the audience knows more than the characters; as we watch them move further in the wrong direction the mix-ups are all the funnier because we’re one step ahead. We also need to believe the feelings involved. These people might not want big things, but their emotional investment needs to feel real, whether they want lifelong love or just a more adventurous life. Without truth, there is no comedy.