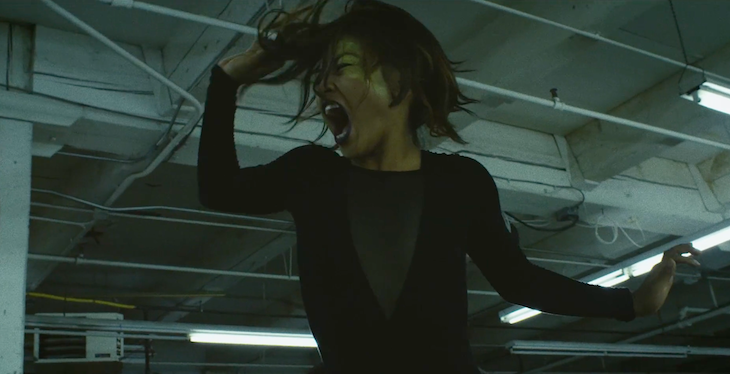 Interdisciplinary collaboration in Seattle is at an all-time high. Case in point: “Trapped,” a slick, rousing short film that combines the talents of choreographer Alicia Mullikin, musician Amos Miller and director Ryan Hills. In the dynamic, three-minute clip, Mullikin and her dance partners from the Au Collective—Cheryl Delostrinos, Samuel Picart and Fausto Rivera Contreras—brandish their skills and their bodies in an assertive statement of identity. Hills’ camera follows the four dancers—two male, two female, two Mexican-American, two Filipino-American—in constant motion, stunting and strutting through the raw basement space below the old Value Village on Capitol Hill. Miller’s “Trapped,” taken from his album Super Square (our Album of the Month from May 2015) soundtracks with buzzy with didgeridoo and thumping with bass.

“My dance aesthetic has been described as aggressive,” says Mullikin, who met Miller at the Seattle Academy on Capitol Hill, where they’re both teachers. “I realize I’ve made adjustments in my own personality. Not wearing my hair in braids, not parting it down the middle because, growing up in Southern California, people would think I’m a wetback. I didn’t wanna be seen as that, I wanted to be seen as American. But that identity has shifted recently, realizing how important my culture is to me. That comes out in my dancing and dancing with other dancers figuring out how they fit into the world. That aggression isn’t anger, necessarily, but ‘Hey I’m here and this is what I have to offer.'”

This film comes after City Arts premieres Jessie Sawyers’ globe-spanning dance film “The First Voyage” just yesterday, and a couple months after we premiered “Breathe, Just Breathe,” a dance video directed by Cheryl Ediss and Carrie Robinson and featuring Molly Sides, and “See Through Me,” featuring Kate Wallich dancing to the music of Cock & Swan. These short films, like “Trapped,” channel the esoteric world of modern dance through the more familiar context of the music video. In doing so, they simultaneously bring dance to a broader audience and elevate the music video to a more artful place. And in the case of “Trapped,” they expose dancers of different backgrounds who are often underrepresented in the medium.

Alongside Mullikin, the other three “kickass brown dancers” in “Trapped” come from Au Collective, a Seattle dance company that spotlights queer, female and POC dancers. “That’s something I’ve focused on a long time,” Mullikin says, “so I thought it was a great opportunity to dance with friends to cool music and also show what we’re all a part of.”

We agree, and today we’re psyched to premiere “Trapped.” Watch below.