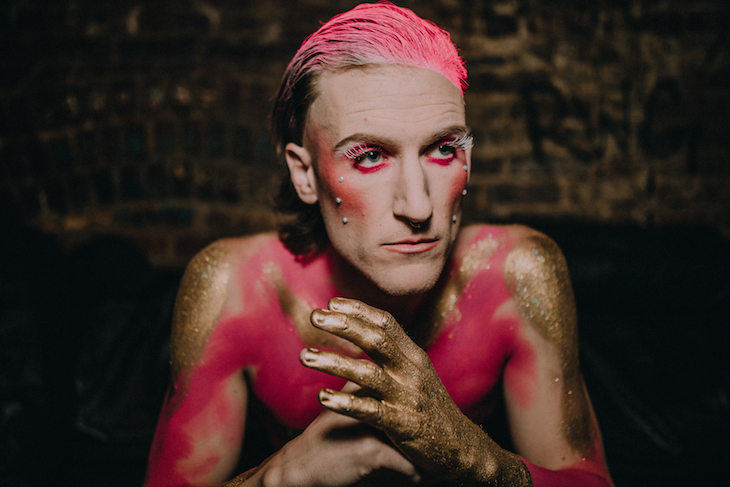 The lineup for this year’s Deck the Hall Ball, 107.7 features a few typical heavyweights: the Killers, the Lumineers, ODESZA, Portugal. the Man. At the bottom of the list, the name J GRGRY might be a new one to fans of the headliners and even a fair share who follow the local scene. But select audiences have already taken notice. The Seattle-based pop hopeful’s outlandish performance style and big, glossy sound make him a natural fit for an arena-sized spectacle.

“When I hear the songs, when they come to me, they’re on this stage,” says Joe Gregory, founder, songwriter and flamboyant frontman of this phonetically monikered project. “It’s not even just the music, it’s this whole presentation that I get in my mind. So now, to be able to take it on the stage, that’s where it’s meant to be.”

Gregory’s glittery pop indeed possesses the kind of powerful dance pulse and moody electro-rock backing that’s better stretching and unfolding in an expansive environment than sticky dive, and Key Arena is wired to accommodate the large-scale light show and projections he says he has in mind.

Gregory and his live quartet have performed high-profile sets at Bumbershoot and Block Party, appearing shirtless and entirely covered in pink and gold body makeup, resembling mainstream outfits with a theatrical bent like Twenty One Pilots. Squeaky-clean production, approachable songwriting and a voice like a higher-register Bono open his songs to commercial viability and justify his leapfrog over the local music-scene grind. In fact, the song “eFlower,” from GRGRY’s early-2017 debut EP Gold Teeth + Glass Eyes, was recently used in a Samsung Korea TV commercial.

In truth, Gregory’s whole operation is informed by years of toiling in the industry machine. In the early 2000s, first as a member of local indie rock outfit Dolour, then with Seattle/Sacramento band the Drama, Gregory worked under a series of record contracts, most of which fell through in the end. Still, they afforded him valuable lessons about playing the corporate-music game. One contract, inked with Elementree Records in 2004, resulted in a bizarre industry tie-in: Label founder Jonathan Davis (yes, of nu-metal band Korn) took Gregory under his wing and the two lived together in his Los Angeles home for a few months, during which time Davis recorded the Drama’s debut. The album was subsequently shelved when the label underwent reshuffling. Gregory says similar false starts at Hollywood Records and Pulse Records took the wind out of the project and left him without access to the recordings he calls his “heart and soul.”

Years went by and Gregory waited for big breaks that never came. He developed a severe drinking problem and took time off to get clean, during which he eschewed the traditional 12-step route, instead relying on meditation. Flash forward to 2017. Gregory is now three years sober but the dark times still haunt his lyrics: “You make me so nervous I shake/I want to be near you every second I’m awake,” he sings on “eFlower.” Like every song on Gold Teeth + Glass Eyes, it could be a love song to a person or a substance.

On the cusp of a career breakthrough. Gregory is currently recording his full-length debut in LA with Tim Dulany, whose most notable production credits include the Heavy, Dude York, Common Market, Wild Orchid Children, Kay Kay & His Weathered Underground. “It’s been a wild ride to get back up here,” he says. He has a three-month lease on a place in Ventura, Calif., just north of the city, which he hopes he doesn’t have to renew. “We’re hoping to release [the new album] first quarter of next year, then from March on be on the road. I’m hoping to be living out of a bus next year.”

He says he has had some label interest, though he won’t specify details. The irony of label attention arriving after that he’s stopped looking doesn’t escape him, but either way he’s moving forward on his own. “I’m always open to hearing what people have to say, but I have the songs and I have the production team. The motion’s already there. If anyone wants to get on board the train, cool. But the train is going.”

J GRGRY performs at Deck the Hall Ball with the Lumineers, the Killers, Portugal. the Man and more on Tuesday, Dec. 5 at KeyArena.