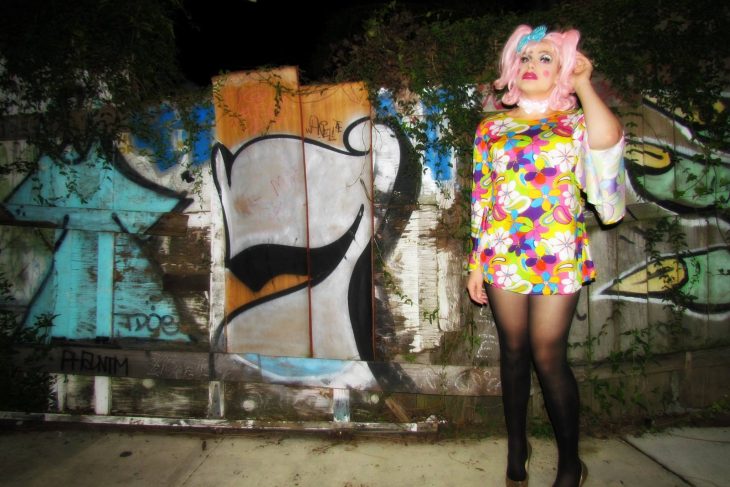 It’s all coming together for Miss RainbowGore Cake.

It’s Halloween weekend and the 14-year-old drag artist is performing in a New Orleans drag bar. Her look is on point, serving a tight Katy Perry in an aqua-tinted mermaid wig and stretchy yellow leggings, and she’s killing it with “Teenage Dream” as dollar bills pour down around her. She’s energetic and engaging, generous and gregarious.

For the last two years, RainbowGore Cake (RGBC for short) has bathed in an adoring spotlight. She’s appeared in drag shows and cabarets around the country, worked with notable talent such as John Waters alum Mink Stole and San Francisco’s Peaches Christ and headlined at the Austin International Drag Festival.

When not busy with drag, RGBC is known as SailorHank Payne (yes, his real, birth-given name), a Seattle resident and NOVA High School freshman. Payne has been dragging it up on the Seattle scene since he was 12 years old, when he did a delightfully busted-up version of local drag anti-legend Jackie Hell, his idol and muse—part Divine, part Witchy-Poo, all adorable human tire fire. RGBC has come a long way since then.

“In the beginning, it was me playing dress-up,” Payne says about the genesis of his alter-ego. “Then I started to take it seriously when I was 12, and I named myself RainbowGore Cake, America’s Youngest Drag Superstar.” RBGC hasn’t stopped working since, supported by the care and attention of his mother, Cheyanne Dise, known affectionately to her friends as “Kook.” Dise is a visual artist, performer, photographer and professional paranormal investigator. She’s also Payne’s adoring stage mother/bodyguard and his biggest cheerleader—his own personal Mama Rose.

“I pretty much knew what was happening when he was about a year and a half old,” she says. “I walked into the living room and he was dancing with a broom and a purse slung over his shoulder singing ABBA. On my 35th birthday, Hank went on stage at the Can Can and performed for me—he was only five! He was so in his element. And I’ve always encouraged both my kids to do what makes them happy, to stand up for what they believe in and to not let the world pass them by, to question everything. To be compassionate and aware. I’m very proud of SailorHank’s courage and honesty.”

It takes a village to raise a drag superstar. Along with the relentless encouragement and support of his mother, Payne has an extended family backing his every stiletto-heeled step—a jolly pirate crew of carnies, musicians, visual and performing artists, and fabulous freaks of every imaginable stripe. Dancer Rainbow Fletcher and burlesque artist Paula Oliver (of Atomic Bombshells Burlesque) both helped SailorHank develop confidence and stage presence with movement and dance, and last year, Vinsantos Defonte of the New Orleans Drag Boot Camp flew into town for a week to give Payne a crash course in hair, makeup, lip-synching and the finer points of drag performance. “My skills have gotten much better,” Payne says.

Beyond drag, Payne manages his brand like an industry of one. He started producing his own art shows the tender age of six in places like Bootyland on Capitol Hill and the now-defunct Cafe Racer. At 13, he wrote and produced a short film called Fire, an imaginative tale about an unfortunate encounter with a cursed doll, and he even threw his own opening-night screening with red carpet, photographers, musicians, cabaret performances and RBGC merchandise, including original artwork and copies of the film.

Now back home in Seattle, Payne’s nose is hard to the grindstone: On Sunday he premieres his first full-length show, Aurora Boulevard, a drag parody of the classic film Sunset Boulevard, which he wrote, directed, produced, and, of course, stars in as RainbowGore Cake. Most exciting to Payne is that it also stars his idol, Jackie Hell.

“The first time I saw Norma Desmond [in Sunset Boulevard] she reminded me so much of Jackie Hell—her facial expressions, her eyes, the way she talks and her attitude. That’s what really inspired me to write, direct and produce this play,” Payne says. “Later that same night I started writing it. It took a year to finish but it was worth it. We have talented folks besides Jackie too: Miss Spooky, Josh Hartvigson and Adam Thompson.”

“In Aurora Boulevard,” he says, “RainbowGore Cake moves to Seattle from Twin Peaks to get her drag career started.” (Twin Peaks is another of Payne’s obsessions, and Dead Laura Palmer—“wrapped in plastic!”—appears frequently in his performances.) “On the way through Aurora Boulevard, her car breaks down. The closest hotel is Hell Hotel owned by Jackie Hell, Seattle’s Skid Row Drag Queen!” And thus, the scene is set, lining up with Miss Hell’s own drag mythology, which claims she ran a hotel of ill repute on Aurora for many years.

Sadly for Seattle, Payne and RGBC might not be with us much longer. Payne has been accepted into the arts program at the New Orleans Center for Creative Arts and plans to attend next fall. Before he departs, see RainbowGore Cake this Sunday, Nov. 19 in Aurora Boulevard, a pay-what-you-can, all-ages event at the Royal Room.