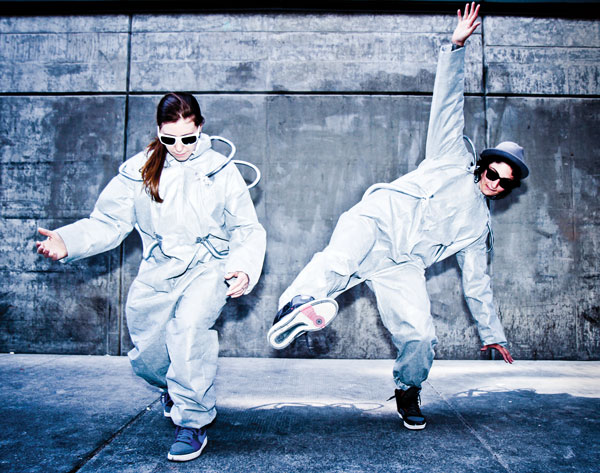 “We’re interested in the science of outer space and how poetic and magical it is,” says Maya Soto, “like the vast and complex inner workings of our hearts.”

Soto, who’s typically a dancer/choreographer, and her collaborator Nico Tower, typically a composer/designer, have spent the last year developing Inner Galactic: An Odyssey of the Heart, an ambitious new dance performance that premieres in November at Velocity Dance Center. “We’re playing ourselves in our own fantasy about outer space,” Soto says of the two-woman show. Both Tower and Soto perform, each of them exploring the other’s disciplines.

Tower composed the music (except for one song by Soto), a mostly electronic mix with percussion and ambient sounds. She scores the performance live from the stage, where her sound rig is set up like a spaceship. “It’s like being the conductor of a virtual orchestra,” Tower says.

Soto provides the show’s choreography, which is rooted in improvisation since Tower has no technical background as a dancer—more of a “movement landscape than set choreography,” she explains—blending together her many different influences, including hip-hop, modern, Latin and social dances. “Nico asks a lot of questions about movement,” Soto says, “which makes me think about things in a new way.”

The two met a little over a year ago when Soto commissioned Tower to compose some music for a short dance piece. They quickly discovered their compatibility as collaborators, as well as their shared geekery about superheroes and Carl Sagan. Development of Inner Galactic began almost immediately.

Soto and Tower are doing all of the show’s production design themselves, including lighting, costumes and a series of interactive installations orbiting the performance space in the lobby and adjacent studio. Among them are a “wishing chamber;” a silver, mirrored “reflectorium” for experiments in introspection; and a study full of inquiry objects like binoculars, a magnifying glass and a telescope.