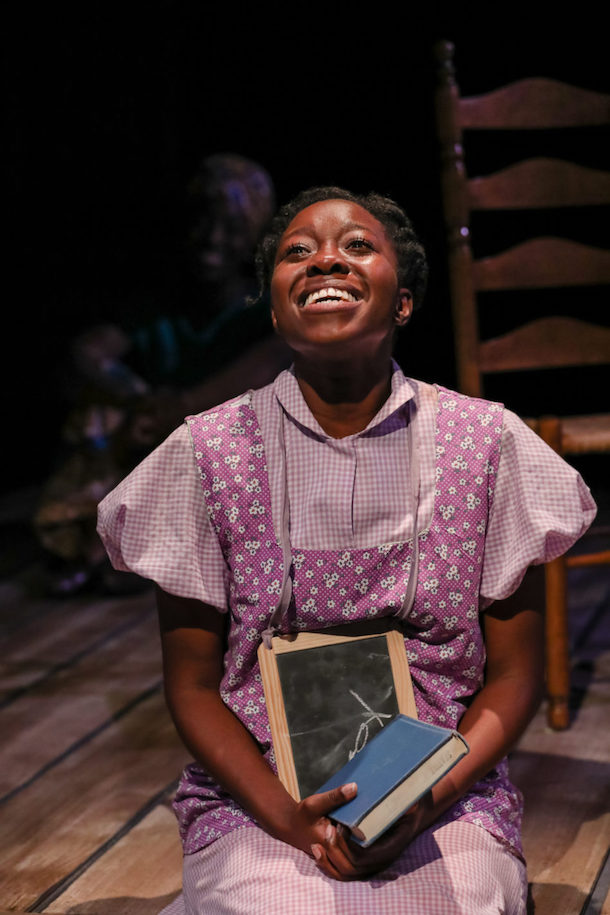 Hardly a word falls from Maya Angelou’s lips (or pen) that doesn’t melt me to puddles and make my heart burst open like a bittersweet balloon. It’s not only the power of her celebrated prose, it’s the power and presence of who she was, her joyful and painful life experiences, and the hope and dignity she represents.

But it’s so very easy to toss around words like “hope” and “dignity” while describing Angelou and her myriad works while glancing away from the dark histories that forged these virtues. Angelou was the sum of her incredible character plus an impossible time in history. She was raised a poor black girl in the segregated American South in 1928. Trials and travails were fait accompli. Book-It Repertory Theatre’s faithful adaptation of I Know Why the Caged Bird Sings doesn’t let anyone off the hook. Like the masterful autobiography it’s based upon, the play forces us to stare unflinchingly at all of the longing, sorrow, confusion and ugliness of Angelou’s experience.

“What you looking at me for? I didn’t come to stay… I just came to tell you, it’s Easter Day!”

We are introduced to an awkward young Maya, all skinny knees and self-consciousness in a homemade taffeta dress, delivering an Easter poem to the children’s section of the Colored Methodist Episcopal Church in Stamps, Ark. We travel with Maya (then called Marguerite) from that moment into young adulthood and through the birth of her son when she was 16. Aishé Keita plays Young Maya throughout, but the story is narrated by adult Maya, played by Brennie Tellu, as she both guides and reflects upon her story through time.

Much of the skillful cast doubles as more than one character. We meet young Maya’s family and the other major characters of her life: her beloved brother Bailey (Chip Sherman), the proud and strong grandmother, called Momma, who raises her (the magnetic and capable Shaunyce Omar—just wait until Momma goes mama bear on a racist dentist!), her kind and disabled Uncle Willie, who teaches the kids numbers and is forced to hide his aching bones from the Klan under a pile of old vegetables (a stirring performance by Ronnie Hill, who does double duty as the odious Freeman). Eventually, we meet Maya’s real mother, Mother Dear (Dedra D. Woods, who also plays the upstanding Mrs. Flowers, one of Young Maya’s early supporters and teachers, who introduces her to poetry) and her rather oily father (Lamar Legend).

Spoiler alert! At one pivotal point in her wide-eyed journey, Young Maya is sexually assaulted at the fragile age of eight by her mother’s awful boyfriend, Mr. Freeman. “If you tell, I’ll kill Bailey—I’ll kill you,” Freeman threatens Maya. But the crime is eventually uncovered, Freeman is brought to trial and found guilty, but he never spends a day in jail—and I’ll say no more. Credit must be given to director Malika Oyetemin for the way this unsettling scene was staged. It’s difficult material treated with integrity and care.

The production was co-adapted by Book-It co-artistic director Myra Pratt and Oyetimein, whose creative and thoughtful staging throughout brought cleverness and charm—the entire cast is composed entirely of POC, for instance, including those playing white characters. When a white character appears, the actor playing them wears blinding head-to-toe white, including gloves and a hat angled down over their face. Simple yet very effective. Christopher Mumaw’s set conjures the depth and texture of the Old South, evoking a shabby melancholy charm that underscores the story (hat tip to props designer Cedrick Wright as well).

Book-It’s Caged Bird is as faithful and beautifully produced an adaptation as the source material deserves, and a fine tribute to an incredible American legacy.

I Know Why the Caged Bird Sings runs at Book-It Repertory Theatre now through Oct. 15.