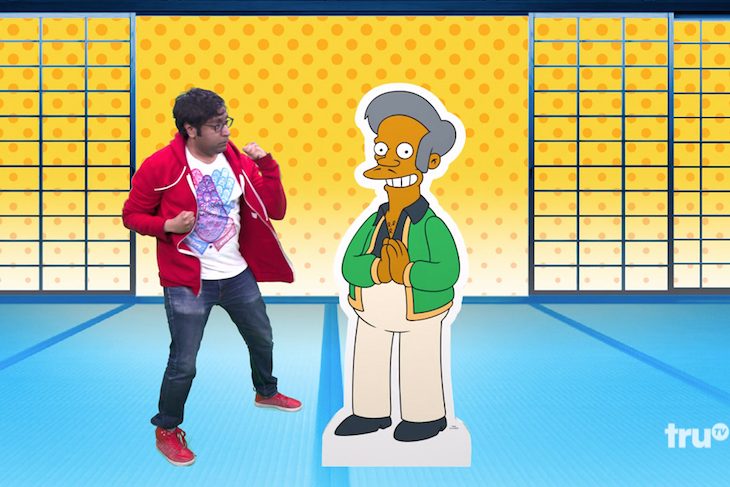 Hari Kondabolu's 'The Problem with Apu'

Just about everyone agrees comedy is an art form. Ask any comedian or comedy fan and they’ll wax eloquent about the nobility of speaking difficult truths, challenging unspoken assumptions and neutralizing cultural toxins with the power of laughter. Of course comedy is an art.

But a strange thing happens when you submit comedy to the same sort of rigorous analysis we apply to other art forms: a significant portion of its proponents gets very, very pissed. They insist that you “lighten up,” that “they’re just jokes,” that “snowflakes” and the “PC police” are killing comedy. This is another way of saying that comedy must be allowed free reign to marginalize and offend, that if you take issue it’s because you “just don’t get it.” This same potent cocktail of dominance and grievance fuels the white supremacist takeover of our government. Long before the President and his supporters held up “political correctness” as a great unifying enemy, the same trope incubated in the comedy world for years. Comedy was Patient Zero for the social contagion of Trumpism.

Against this backdrop, Hari Kondabolu’s new documentary, The Problem with Apu, stands as a crucial record of the intensifying efforts to hold comedy accountable as art. In it, Kondabolu applies a rigorous analysis to one of America’s most beloved cultural products, The Simpsons, and to its most problematic character, Kwik-E-Mart proprietor Apu Nahasapeemapetilon. As the only visible South Asian character in popular culture in the ’90s, Apu was the bane of Kondabolu’s existence growing up. Bullies taunted him with Apu’s stereotypical accent and signature catchphrase: “Thank you! Come again!” Kondabolu is still upset about it.

The Problem with Apu belies the “anti-PC” crowd’s attempt to paint critics as humorless, hypersensitive scolds who are trying to kill comedy. Kondabolu brings thoughtfulness, vulnerability and humor to his takedown. He treats comedy with far greater care and significance than its loudest, most reactionary defenders do. He tackles the thorny question that all comedy buffs—Kondabolu is an avowed Simpsons fan—are forced to face these days: How can you love something that can also be so blatantly problematic?

The Problem with Apu is a master class in how to parse the impacts of marginalization in comedy and confront its worst perpetrators. Kondabolu seeks out other South Asians of his generation who were haunted by the specter of Apu, from former Surgeon General Vivek Murthy to fellow comedians like Aziz Ansari and Aparna Nancherla. He parses the layers of contradiction they face trying to work in showbiz, where many of the most lucrative roles available to South Asians amount to brownface minstrelsy. He asks the difficult question: “Is it better to be clowned or clown yourself?”

Kondabolu mines his topic for nuggets of trivia: Apu’s surname is the Sanskrit word for bullshit; he only uttered his signature catchphrase eight times in the show’s entire run. There’s also plenty of pathos, such as when he interviews his parents and they tease him for having “Apu hair,” or when Aasif Mandvi describes his acting resume in the mid-’90s: “Cabbie, cabbie, cabbie, deli, deli, doctor.”

The crowning indignity at the heart of the documentary is the fact that a white man, Hank Azaria, is the voice of Apu. Azaria did not agree to be interviewed for the documentary, and his absence highlights the sense of injustice left in his character’s wake. Kondabolu forges on.

If anything, Azaria’s snub ennobles Kondabolu’s mission. Beyond the righteous anger and well-catalogued list of grievances, The Problem with Apu grants a deeper understanding of the experiences of actual people and a nuanced appraisal of a beloved staple of American culture. We’re going to need much, much more of that if we hope to survive this blighted era with our sense of humor intact. Though you might wince the next time you see Apu onscreen, you must acknowledge that uncompromising critique—this one or any other—is not “killing comedy.” In the end, it might just save it.

Hari Kondabolu performs two shows at the Neptune Theatre on Dec. 15. The shows will be filmed for his next comedy special to be released next year.