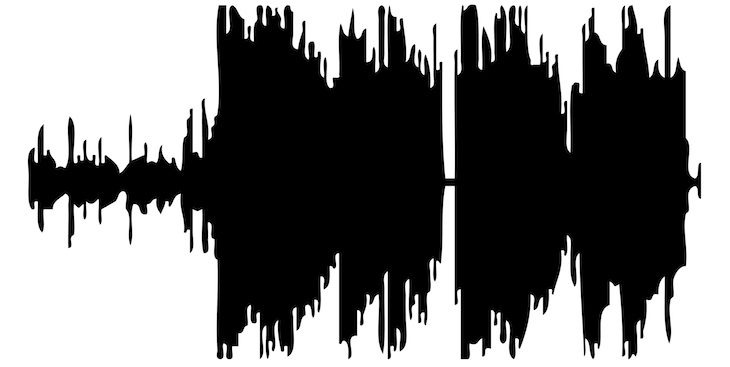 “What’s your object of solace?” With this simple question, sent to 60-some friends and acquaintances, Julia Freeman hoped to reconstruct the foundations of her artistic belief system.

It was summer. Freeman had spent the last 500 days teaching visual arts at the Northwest School and co-curating shows at the Alice gallery in Georgetown, which she founded. Somewhere along the way, she’d lost her belief that making art is worthwhile.

Spoiler: She decided it is. She reached that decision, as artists do, through making art. Which is why we’re now here, in her Columbia City studio where her cross-eyed Lynx Point Siamese cat Caprica has positioned herself on top of a stack of drawings and Freeman is coating large pedestals with a final layer of paint. The pedestals are part of Freeman’s expansive solo show and installation about human relationships in the information age, The Will to Synchronize, opening Dec. 1 at Method Gallery.

On these pedestals visitors will see boxes of pink-and gray-tinted sculptures based on the printouts of sound waves made from voice recordings from Freeman’s respondents and small clay grips molded between two hands. A bombastic sound sculpture by Spencer Ramsey will reverberate through the gallery.

“It’s a lot, but somehow it’ll look like a little,” Freeman says. “I haven’t made an installation since 2009. My last show dates back to early last year. I’ve taken the longest break from art I’ve taken in 10 years. That was me questioning why people should make art.”

City Arts: That’s a big question.
Julia Freeman: Yes. I’ve been making art since I was young, so it’s of almost religious importance to me. I’ve asked myself this question before, but it became more prevalent from my perspective as a curator: What does art do for us? I had lost some sense of hope or faith in it.

Where did the doubt come from?
The lack of connection my work was making to the people closest to me. It was almost like I was speaking a language that no one was understanding. So why speak then? This summer, I pulled myself out. I started drawing the rocks one of my best friends gave me for my birthday, over and over. That got me back on track.

How did you attempt to reconnect?
My first real art project, in my senior year, were gifts I made for people. I asked them where they’d hide or keep the most precious thing that they owned and made boxes specific to each person. As that connection was missing, I sent out a new questionnaire. I asked, What is your object of solace—a memory, an object or a sensation. Can you describe it? Can you name it?

Who did you send it to?
Friends, family, fellow artists and even people I didn’t really know. Some of them were people I’d just texted or exchanged one email with. I was thinking about our social network, literally: How do we store all of the people we know in our bodies, and how do we rely on the Internet for this? What do we lose and gain by that sort of storage? I wanted to make a computer.

What did you do with the results?
I asked everyone to record one sentence of their answers, and then printed those out as sound waves. I then followed their visual lines to engrave polymer clay rolls that I carve on a lathe. So every respondent has their own object. Each object is connected with a piece of clay that was made by holding it in my hands while I gripped theirs. And Spencer made a score that I’ll play in the gallery that uses most of the voice recordings. It’s pretty dramatic but I wanted to fill the space with something else than all these delicate objects. 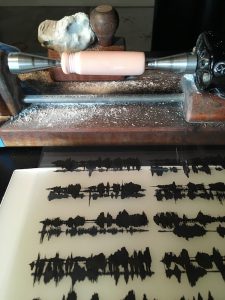 In your exhibition statement, you mention questioning “the nexus, control and evolution of relationships as they move into the state-regulated bubble of online space.” How do we see that question here?
Isn’t it strange that even in loving each other online, we’re regulated and surveilled? How does that change our ways of loving? Do you act differently? What’s your persona? Social media can be a bubble, but it also connects people and has allowed people to be heard and organize. The exhibition is about those questions and not having the answers.

Your work is usually research-based. Is this show a departure from that approach?
Research is my way of learning about things and making connections. I usually keep binders full of subjects I’m reading and thinking about. For this exhibit, I read the first chapter of John Dewey’s book Art as Experience, about aesthetics and art; wrote a lot myself; and researched the human larynx, our voice box. The size of the objects in the exhibit are based on the size of our larynx.

But there’s less research. This exhibit touches more on sensations.

Your work is also engaged with the systemic more than the personal. Is that still true for this show?
The personal is usually just the way I get into a topic. If you don’t transcend the personal, it’s just you. In “Quiet Altar.” I thought about the pharmaceutical industry, but had gotten to that subject through my dad, who had passed away. I was questioning the drugs that big pharma had been providing him for years. For that show, I connected logical, rational dots, but I felt like I almost choked something. Here, I’m wondering: How do people connect, find solace, and how do we relate to that online?

What have you learned from the answers to your questions?
It’s been so fascinating. Memories, sensations, all of it is held so differently in each person. While the information was trickling in, it felt like I was doing some sort of beautiful data analysis of the ephemeral. It was also an opportunity for me to rethink the lack of connection I was feeling. It was good to realize I didn’t know some of the most important things about the people I love. Listening is underrated.