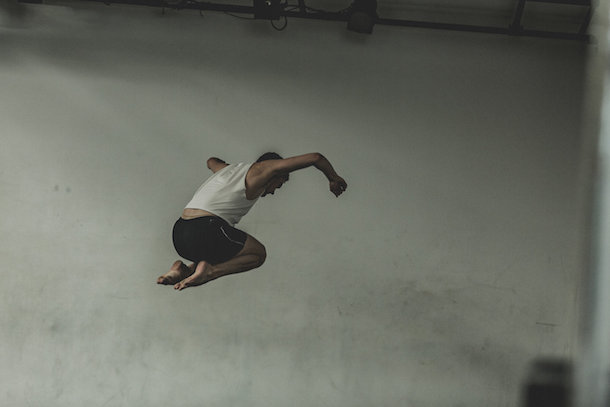 Experimental choreographer Kate Wallich’s latest show, SPLIT BILL, marks the beginning of a cross-country dialogue between her company The YC and MADBOOTS DANCE, a New York-based, all-male contemporary group. Running now at Velocity Dance Center, SPLIT BILL features one piece from each company—and both works are seeds of ideas that will evolve into two individual shows next year. The two pieces share themes of isolation, connectivity and empathy, but they also stand in stark opposition. Shown together, their stylistic differences are enhanced—and made more powerful.

The opener is MADBOOTS’ MASC—a visceral, raw work that not only shows off the company’s collective skills, but also celebrates the masculine body in both blatant and subversive ways. Costumed in black briefs and black elbow-length gloves (one dancer is without costume at all), the five men revel in their exposure, striking statuesque poses around the bare stage, stretching limbs in sensual curves, flexing muscles and filling the small theatre with intense energy. The group avoids an excess of stereotypical “masculine” ballet motions like jumps, leaps, throws and lifts, opting for a strong grace that imbues every gesture with deep emotion.

Set to a mix of waltzing piano music and opera interspersed with spoken word from Gus Reed, Jonathan Campbell and Austin Diaz (“I have known complete freedom while being held down by a man,” “I am lovely,” “fuck constraints”), MASC uses multiple tempos, with the dancers preforming singularly, in pairs and in trios. For a large portion of the piece, one dancer lays naked in front of a suspended Plexiglass rectangle, moving large rocks around and seeming to admire his faint reflection in the material. Another dancer in a tight, black, face-covering hood and boxing gloves violently throws himself onto the ground over and over again, writhing. MASC is a beautiful show of skill and passion, and it will be interesting to see how its themes of power and isolation evolve for the show next year.

Wallich’s Dream Dances excerpt, with an electronic score from Johnny Goss and Andrew J.S., feels like a study of isolation and the disconnection of contemporary society. Dressed in casual, athletic streetwear (costumes by cuniform), the five dancers’ movements are repetitive and rhythmic, their blank stares devoid of emotion—as though they are automated cogs in a machine, going through the motions, doing their jobs, not missing a beat. But if that sounds boring, it’s not. The precision of their swinging arms, hands in blades, legs walk-marching is reminiscent of a drill team and the choreography is punctuated with hops, drops into grand plies and other pattern-breaking surprises that highlight Wallich’s experiments with speed. During one section, pounding with heavy-metal music, the dancers move slowly, stretching and sliding on the floor, sitting motionless on a chair. The slow movement combined with the frantic sonic experience creates a sense of unease, bordering on panic: Why aren’t they moving faster? They should be moving faster!

While MASC creates an intense environment on the stage, Dream Dances transfers that intensity into the audience, blurring the “real” world and the “performance” world. Wallich often leaves ephemera helter-skelter around the edges of the stage (in this case a pair of silver boots, a blanket, a cell phone) and embraces pedestrian movements in her choreography, such as dancers leaning against the wall, sitting in chairs, sprawled in a corner. These familiar items and gestures tap into our daily routines, leaving dogears of human experience throughout the work.

A guest appearance from former PNB and Whim W’Him dancer Andrew Bartee is welcome but doesn’t feature him in his full capacity. In his most striking moment, Bartee performs a blatant visual metaphor, dragging a bottle of vodka tied to an iPhone cord. Wallich’s not raising any glaring new point that we’re all walking around addicted to our phones and social media, but holding a mirror up to the resulting disconnection, ennui and self-interest still presents a chilling image.

In the end of Dream Dances, though, the group engages in a looser, more emotional underwater dreamscape with an optimistic effect: There is hope, and it starts with us.