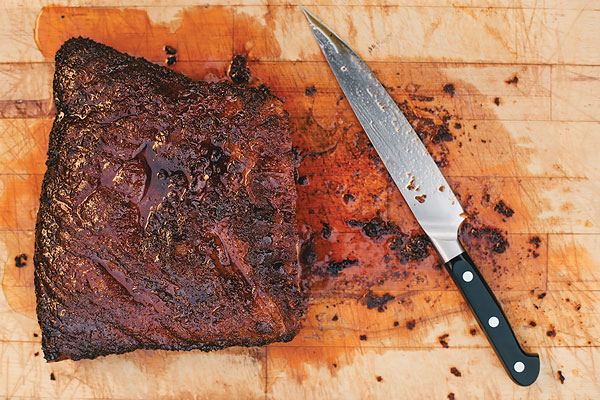 When Stefan Giles was 13, he watched his father grill a pork chop over an open flame on the back deck of his childhood home in Spanaway, Wash. Not an uncommon sight in their globetrotting military family, but at that moment it triggered a sudden, life-defining comprehension in Giles’ pot-activated adolescent brain.

“I watched this meat go from completely raw to that beautiful, brown caramel,” says Giles, now 37 and admiring the late afternoon sunshine from the deck of Maximilien in Pike Place Market. “I realize that just watching grass grow is interesting to a stoned teenager, but this was a big deal. That might be the moment I wanted to start cooking with fire, and specifically meat with fire. Right in that moment, I knew where delicious came from.”

Apart from a debauched ’80s interlude as a Los Angeles-based metal musician, Giles has spent his days chasing that delicious moment. His first job was washing dishes in a tiny Mexican restaurant; he’s since occupied every conceivable role in the back and front of the house, from downtown dives to corporate chains.

Giles also became an avid game hunter and all-purpose outdoorsman, eventually teaching courses in glacier travel and crevasse rescue for skiers and snowboarders. But it wasn’t until he took a backcountry camping trip with his wife about a year ago that he realized his teenage instincts were spot-on. 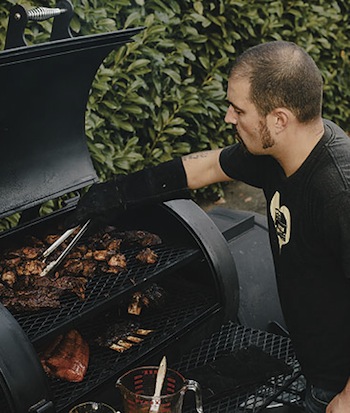 “I had gotten my hands on some boar sausage and mixed it with veal and mushrooms,” he says, his eyes shining with salacious nostalgia. He buried it all in a Dutch oven, built a campfire on top of it and crawled into the tent the couple had pitched near the oyster beds of Dabob Bay on the Olympic Peninsula. The next morning, he poured the whole glorious mélange over homemade biscuits. His wife told him he had to figure out a way to do it for a living.

Though Giles works in the bar industry, tending to the crowds at Capitol Hill’s Barça and consulting for boutique cocktail lounges like Sun Liquor, his affection for the open flame has morphed into a cottage business. This spring, he acquired a 72-inch, 3,500 lb., custom made, trailer-mounted smoker, forged from quarter-inch steel and outfitted with everything he needed to start his mobile operation, Campfire. “It’s basically a convection, wood burning oven with [top burners and] the ability to add real smoke during the cooking process,” explains Giles. “It can grill, bake, roast, smoke, boil, stew and sauté—all with one real wood fire.”

In September, Giles was a guest chef at the Judkins Park Café and in August he served as a primary vendor at the Lo-Fi Festival, a 24-hour, multidisciplinary outdoor arts event held each summer at the Smoke Farm in Arlington.

“I brought 300 portions of food for 500 people and we sold out of just about all of it,” says Giles. He served country-style pork spareribs—dry rubbed, smoked and wrapped in bacon—along with German potato salad, sweet German cucumber salad and barbequed salmon that caused one woman to scream at a disturbing volume, then refuse to share with her companion.

Between guest chef gigs and catering for rugby teams, he continues to refine his recipes for his eager and hungry audience of carnivorous friends.

On one of the first chilly evenings of fall, Giles hosted a dinner at his Beacon Hill home. Smoke-bronzed elk, pork and salmon were scattered on large wooden cutting boards in the middle of the table, Viking-like. Guests clutched generous goblets of wine and speared chunks of elk meat, massaged with a smoked paprika-based rub and doused in Giles’ signature sauce (Ancho chilies, balsamic vinegar and apricot puree) with long, resin-handled meat forks.

Also on the table were buttery, smashed fingerling potatoes singing with lemon juice and fresh thyme. A green salad was dressed with vinaigrette and augmented by a cascade of homemade, Guinness-marinated bacon that Giles had spent the last 48 hours marinating, curing and smoking. Lingering guests were treated with homemade s’mores and absinthe-marijuana tincture.

Until Giles can serve his fare in a brick-and-mortar establishment, he’ll continue to cater public and private special events. In the coming weeks, he’s doing a private dinner for Center on Contemporary Art members and a wild game dinner at Judkins Street Café. Although a food cart seems like a natural fit for Campfire’s mobile rig, the idea doesn’t appeal to Giles.

“There seems to be a disconnect between the food and the people,” he laments. “They’re either on their way back to work or drunk. Nobody cares if you have good pork—they just want it tasty, cheap and fast. I want to cook for people who are excited about the food.”

That’s why catering works for this open-flame chef. “Catering someone’s party—they want to be engaged with their food,” he says. “That’s why the smoker is fantastic. It’s outdoors—there’s no separation. People stand around the whole time talking about it, so when they finally eat it, they’ve built up that anticipation.”