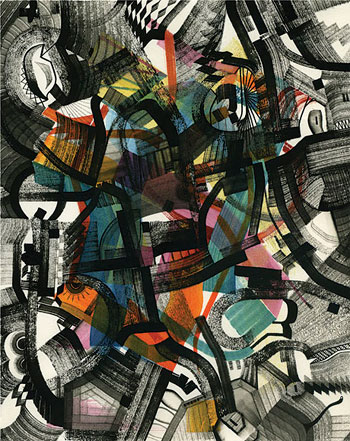 Like the punctuation of slick orange rain boots or a bright scarf against fall’s environmental palette, Robert Hardgrave’s paintings offer a visceral pleasure. Smudges of color beneath networked black lines create a fluid pattern in much of his work over the past two years. Hardgrave began using this particular technique during a retreat at a Canadian monastery. “Since I don’t have any religious affiliations, I spent the majority of my time in the cathedral and in my tiny room. I made the drawing discovery early on, so I was in deep by the time we left,” he says. “Borgine” was shown outdoors during a one-night exhibition titled Small Voids during October’s First Thursday art walk in Pioneer Square.