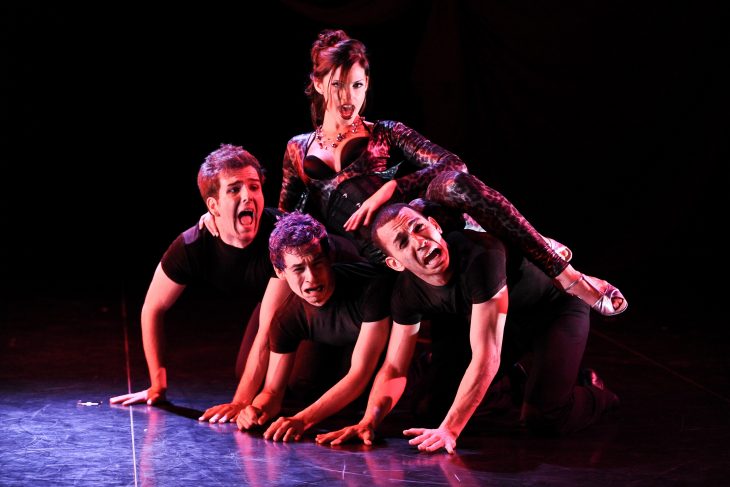 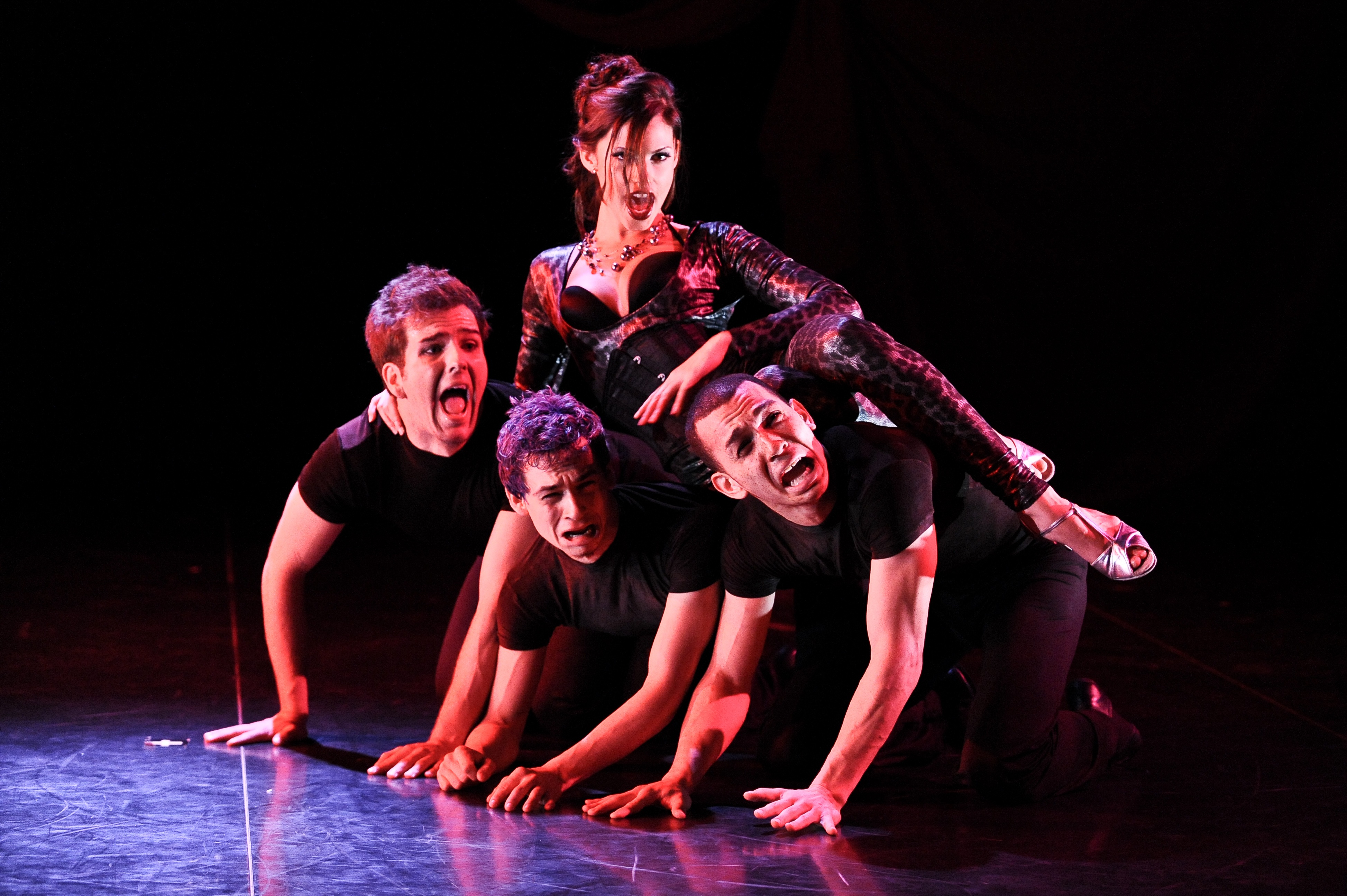 A night of playful performance and slapstick humor, The Variety Show is the solution for those who find themselves on the cusp of dance appreciation. A collaboration of Spectrum Dance Theatre, Seattle Dance Project and ACT Theatre, the show is comprised of 13 short pieces (all under 10 minutes, with many under 5 minutes) from five choreographers, and hosted by popular personalities Lou and Cherdonna, The Variety Show throws work from veteran heavyweight choreographer Donald Byrd (Spectrum Dance) into the ring with choreographers Ezra Dickinson, Timothy Lynch (Seattle Dance Project) and Eva Stone. A single vignette from Catherine Cabeen leaves tingling anticipation for her show at On the Boards this week.

The evening started with a mock lounge act choreographed by Byrd; the dazzling Tory Peil slinking around the stage in a curve-hugging red cocktail dress and long white gloves lip-synching to Cole Porter’s It Was Just One of Those Things. Three men in tuxedo jackets (Michael Bagne, Ty Cheng and Vincent Lopez) vied for Peil’s attention, jumping around the stage in a show of pure athleticism, landing in splits and crawling at her feet. Despite the frenzy of movement around her, the songstress never stops playing with the audience, drawing their attention with swaying hips and body rolls. Thus sets the tone of the show, and of Byrd’s contributions to it. Two of his other pieces, Venus, Minerva and June and Lola feature strong female roles, the latter reflecting the tone of the opener, with Kylie Lewallen replacing Peil. Byrd’s pieces were sexy and lighthearted, successfully bridging the gap between dance and theatre, using humorous acting and fast-paced choreography to seduce the crowd.

Eva Stone’s choreography was a standout. Less experimental than either Lynch or Dickinson, Stone showcased a contemporary triptych, Jimmy Rolls In (Pts. 1, 2 and 3) that appealed to both modern and classical sensibilities. In the first third Amber Mayberry and Vincent Lopez danced to Otis Redding’s These Arms of Mine, and Stone utilizes circular movements in the arms, legs and walking patterns of the two dancers. When they settle into the smoky, jazzy rhythm of the music their bodies fill out, with limbs seeming to extend beyond their own capabilities. Jimmy Rolls In, part 2 was full of visible emotion; dancing to Peggy Lee’s I Love the Way You’re Breaking My Heart, Cheng and Lewallen performed a stunning piece. Their chemistry was evident and suffused their movement with extra (albeit controlled) energy. Cheng is an undeniably talented dancer, but it was Lewallen who stole this piece. Her grace and strength were present in kicks that flew above her head, constantly turned out legs, pointed toes and beautiful floating arms. In each of the three pieces the female dancer wore the same white sundress with orange poppies and the male dancer wore the same white shirt and black vest. Stone successfully uses duets to explore relationships and the emotions they evoke, changing dancers to indicate the universality of experience.

Cabeen’s piece Society Becomes How You Behave was full of weight transfers and level changes, and the movement, ethereal at times, had a weighted feel, as though limbs (and entire bodies) were moving through a viscous substance. The dancers (Bonnie Boiter-Jolley, Mayberry and Cheng) played off one another spatially, with action and reaction, coupling and a tangling of bodies. It ends with the three dancers back-to-back sinking to the floor. 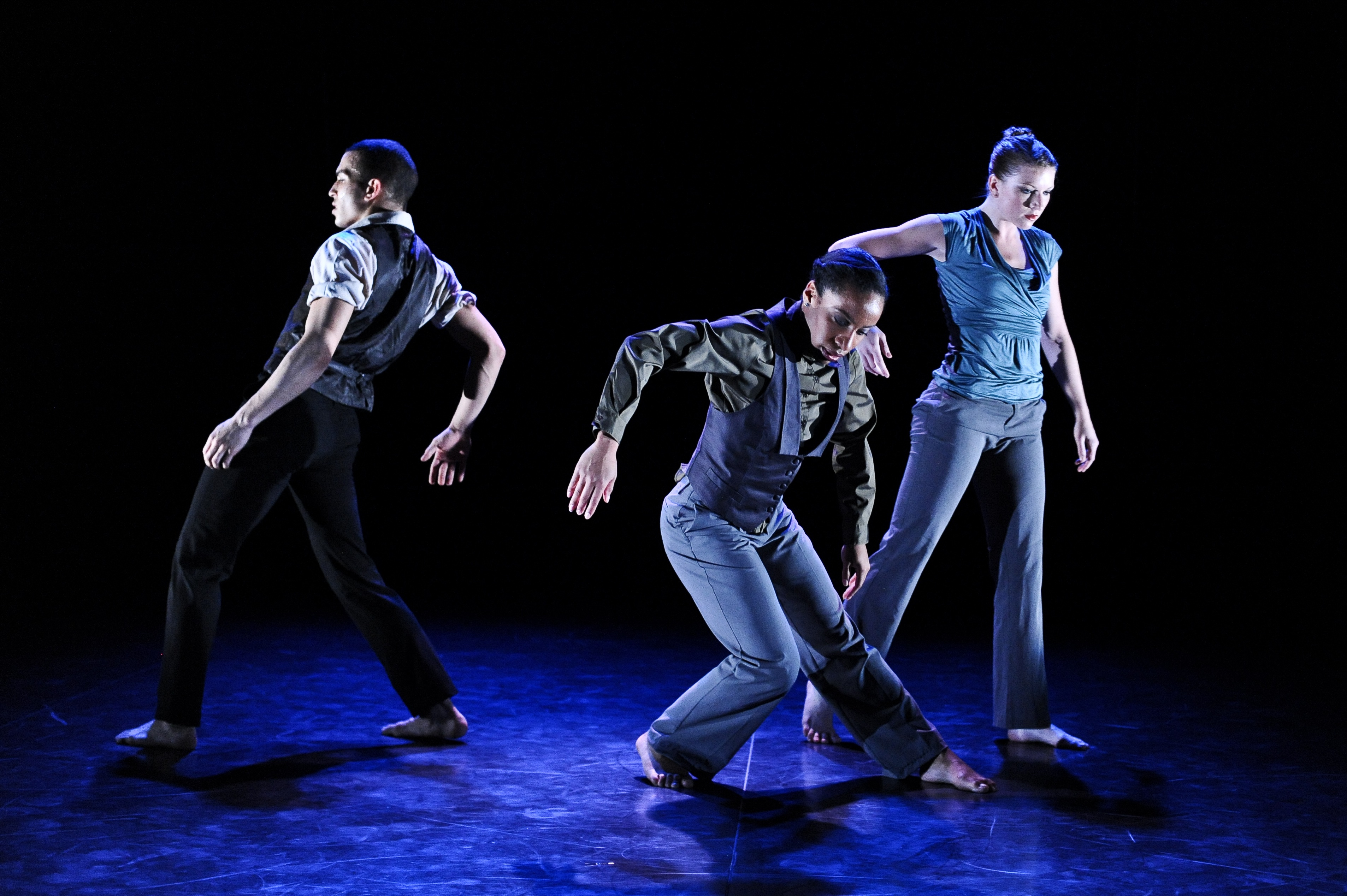 Dickinson knows how to play with an audience. His first piece, Hands Up, has Bagne and Cheng in black skivvies jumping high off the ground repeatedly for several minutes, toes pointed, arms thrown back. The repetition of the same movement over and over displays the athleticism of the two men. The jumping becomes mesmerizing, almost hypnotic, begging for the dancers to expand their movement, to break free from the automatic jumping. When they finally do, it is only for a brief finish.

Lynch’s choreography is not as strong as his performance. Couched in theatre, his vignettes were full of humor and the dancers were skilled, but the pieces lacked the innovation and strong technique of several other works. Lynch’s dancing in Byrd’s Lucky was solid. He obsessively drills balletic foot movement naming the faces as he tendues en croix, then follows a light on the floor, ending up on his knees, tracing shapes with his hands. The chaos of the music is a stark contrast to the seemingly deliberate slowness of the movement, setting (and showing) it off.

For those with a short attention span for dance, The Variety Show provides a fast-paced evening of entertainment, innovative choreography and truly talented performers. If their choreography for this show is any indication of what’s to come, Dickinson and Stone are ones to watch, but put Spectrum dancers into any piece, and it truly comes alive.

The Variety Show will be at ACT Theatre from April 28-30 and at Spectrum Studio Theatre from May 6-7. Tickets here.