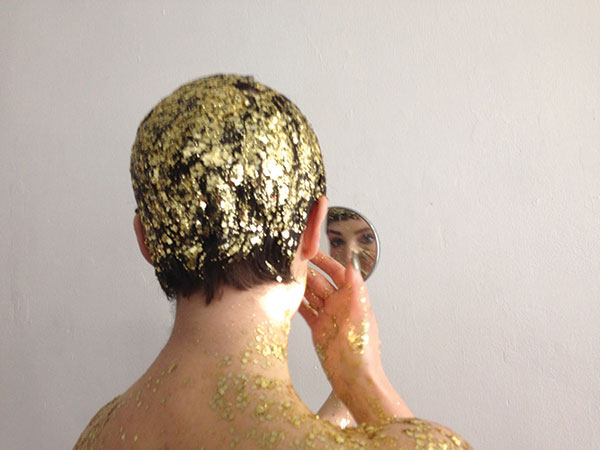 Mary Anne Carter applies one of many layers of glitter during this month’s cover shoot.

I should start by saying that I’m typing these words three hours after the inauguration of Donald Trump.

These last few months leading up to and following his election revealed an extreme state of alienation—of blue from red, urban from rural, white from brown, men from women, populist from conservative, socialist from centrist, America from the world. They have highlighted the danger fomented by our collective retreat into a digital world full of inadequate simulacra. So it strikes me that people are now turning away from fakery and toward each other in real life. In an effort to resist the authoritarian drive to alienate us further, they’re now taking to the streets en masse, body to body.

The rise of reality doesn’t end there. As Jonathan Zwickel details in his story about the inspiring We the People campaign, the protests and marches unfolding this weekend are amplified by tangible tools for resistance, not the least of which are the artwork and signage folks have designed and created to convey their messages. In the case of the We the People posters—including three by Shepard Fairey—the images started as powerful photographs of real Americans, then transformed into beautiful agitprop in the hands of artists. The posters are being disseminated today via full-page ads in national newspapers. (Resist!, a special-edition comics and graphics anthology also covered in this issue, was also published on newsprint.)

As the new administration begins, I’m thinking about the many ways physical objects and human happenings can bring us together to figure out a way forward. Art will play a major role in forging connections, in building the bridges that will put an end to the toxic alienation that got us here.