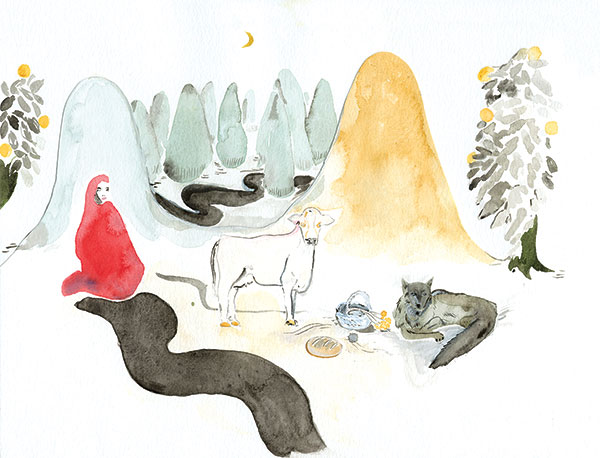 A desperate search for a happy ending at Village Theatre

The cow as white as milk, the cape as red as blood, the hair as yellow as corn, the slipper as pure as gold!” The scavenger hunt that the Witch sends the Baker and his Wife on in Into the Woods surely qualifies as one of the weirdest infertility remedies in history. But that’s what you get for messing with witches.

If you’ve ever even looked at a theatre sideways, or heard a single bedtime story, the characters, scenarios and music of the cherished Stephen Sondheim/James Lapine musical Into the Woods have probably slithered deep into the whorls of your brain without you even noticing—I’d wager my last magic bean on it. Since its Broadway premiere in 1987, this Tony Award-winning show has moved beyond iconic status and directly into the realm of ubiquity. For 30 years it has been tickling the cultural consciousness with visions of witches and princes, white cows and unwise wishes, sneaky little girls and their riding hoods, and giants in the sky. The show pretty much accidentally invented the genre of fan fiction and the genre of Bernadette Peters in the same blow. That’s some heavy lifting.

Into the Woods is the original mash-up, a meeting and melding of beloved fairy tails (culled from the Brothers Grimm and French fabulist Charles Perrault), where your most cherished characters collide and collude to create an ultimate origin story. It gives the old saws we’ve known and loved since the cradle a fresh coat of paint and a sense of depth and dimension, while stubbornly maintaining some of the original stories’ more gruesome moments that Disney edited out—self-amputation, murderous birds, the way they treat the poor giants!

Into the Woods is directed by Kathryn Van Meter and stars a varsity cast of Broadway vets and local luminaries including Trey Ellet as the Baker, Christine Marie Brown as the Baker’s Wife, Mari Nelson as the Witch and Allison Standley as Cinderella.