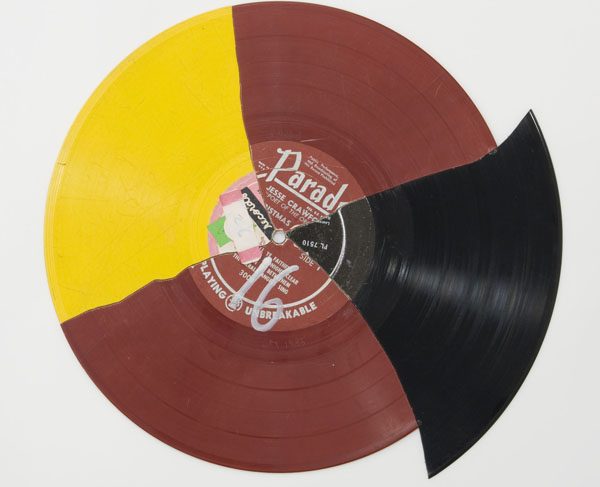 Records are heavy, in every sense of the word.

Whether or not we are old enough to revel in nostalgia for their heyday as the dominant format for recorded music, vinyl records are intensely evocative objects. More than CDs—and certainly more than mp3s—records imply a ritual. In order to engage vinyl, one must set aside space and time for it.

For musicians, records carry all of that weight and then some. They are the tangible milestones of our artistic productivity. Creating a record is an enormous endeavor, which can be excruciating or exhilarating (often both at the same time). 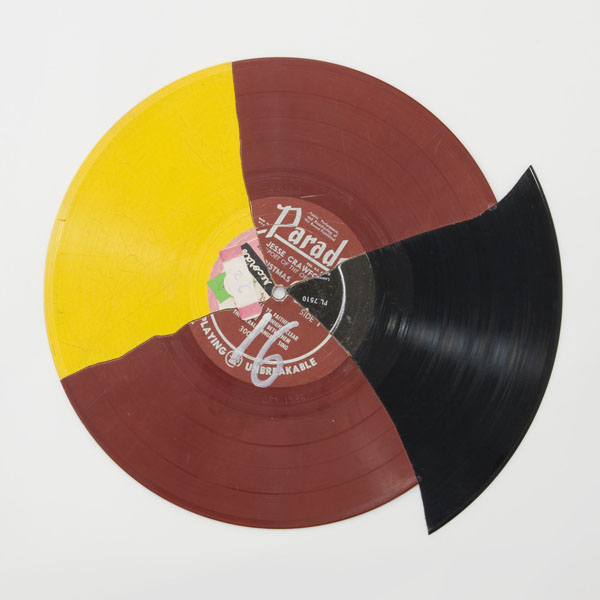 The Record: Contemporary Art and Vinyl, currently on view at the Henry Art Gallery, includes work by 41 artists using vinyl records either as a medium or subject matter. Some of the works, like the mixed media assemblages of Dario Robleto and the album cover parodies of Kevin Ei-ichi deForest, explore the power of records as socially charged artifacts. Others, like Laurie Anderson’s “Viophonograph,” exploit the technology of records to generate sound or time-based imagery in new and unexpected ways. But to me, the most exciting conceptual thread in the show connects a group of works whose content hinges on the act of expressively destroying, transforming, or otherwise undermining the physical integrity of vinyl records for their intended purpose as a medium for storing and transmitting music. 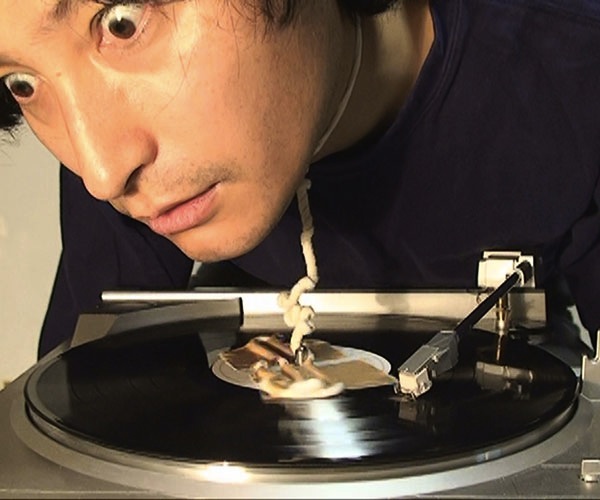 There is a video in the show by a contemporary Japanese artist named Taiyo Kimura. (I had not heard of him, it turns out this exhibition is his first in the United States.) Over the course of the video, Kimura plays a record using an eviscerated chicken as a stylus, uses a knife strapped to his forehead to slice an apple as it rotates on a turntable, and finally affixes a noose around his neck, apparently allowing the rotations of the turntable to asphyxiate him.

Kimura’s video, along with poignantly deconstructive works by Christian Marclay, Lyota Yagi and others, reminded me of the 2009 Seattle Art Museum exhibition Target Practice: Painting Under Attack 1949–1978, which featured an array of artworks produced by acting destructively upon the traditional tools and procedures of painting in order to undermine the perceived sanctity of the medium within the context of art history. (Indeed, Yukio Fujimoto’s meticulously sanded and de-grooved records may be read as a direct response to Robert Rauschenberg’s “Erased DeKooning,” a conceptual centerpiece of the Target Practice exhibition.) 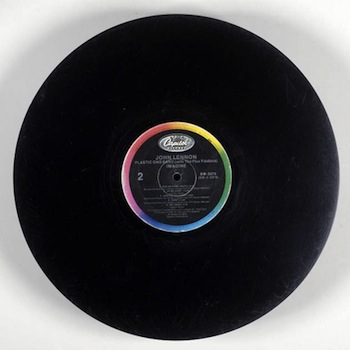 The history of recorded music is in its infancy compared to that of painting, but in many ways, the so-called sanctity of painting is paralleled by the canonical definitiveness of the record-as-object. After all, music is inherently ephemeral. Its primary medium is that of time, and so by its very nature, it lives and dies in the moment of its creation. The act of translating music from a live moment into a recorded artifact fundamentally transforms this nature.

I am interested in the destructive impulse employed as a means of creation by many of the artists in The Record because in a way, these works seem to complete the cycle implied by the record-as-object. The recorded artifact reins in and codifies the creative impulse, and the deconstructive artist sets loose the demons trapped by this process by putting these enshrined objects to work in expressive, spontaneous, even “musical” manner. The results are funny, poetic, and profound.  (I ran into a friend at the opening, a musician in the local punk/DIY scene who commented that it was unsettling to see music enshrined in an art museum. I agreed, and encouraged her to take a closer look at some of the more expressively destructive works for evidence that many of the artists might agree as well.) 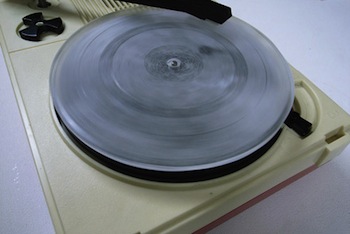 Perhaps the most quietly intense piece in the exhibition is Lyota Yagi’s “Vinyl (Clair de Lune + Moon River).” The artist pressed records of Debussy and Mancini’s public domain classics in ice, playing them on an ordinary turntable and shooting video that captures the distortions that arise as the ice melts over time. As any record fan knows, even the perceived canonical permanence of a record is illusory; the vinyl dies a little bit each time it is played. The implications are, of course, endless.

The Record: Contemporary Art and Vinyl is on view at the Henry Art Gallery through October 7, with a number of events scheduled throughout the coming months.