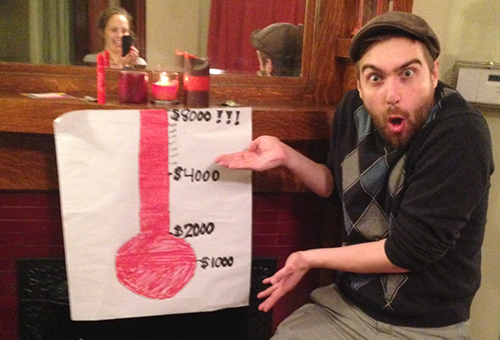 Clayton Weller launched the Pocket Theater Project on Kickstarter on April 27; it reached its goal of $8,000 in 8.5 hours. The proposed 20-30 seat theater Weller’s campaign advertised will center around comedy, and, operating under the conviction that “no one should have to pay to perform,” will offer artists free performance space.

The Pocket’s grand opening is scheduled for October and as of last week Weller had begun moving forward on a space in Ballard. With only three days left in the campaign, the project has raised $24,800 dollars, and endorsement from artists across the city and country, demonstrating that free performance space is a commodity worth paying for.

Weller, who is the artistic director of Sketchfest Seattle, cofounder of the app company Freak’n Genius and a 10-year member of Ubiquitous They Comedy, conceived of the Pocket Theater model during a conversation with Comedy Sportz’s Alex Grindeland. The two envisioned a space for comedians that would bridge the tricky career gap between headlining at the Comedy Underground and making non-consenting audience members choke on their pad see ew at Jai Thai’s Punchline Tuesdays. “The thing that doesn’t exist in town are showcases,” Weller says. “The people who’ve done open mics and have some good material, they don’t have anywhere to go before they’re headlining.”

When Weller crunched the numbers on a typical 100-seat fringe theatre model, he reached the same sorry conclusion that many performance artists do: Opening a theater is financial suicide. If he wanted to reduce that risk factor from nearly 100% to zero, Weller realized he needed to build a space around several basic conceits. First, any artist, regardless of how little-known they are, can bring in at least 10 people. Second, a theater needs to sell at least 50% of its seats to feel full.

From there, Weller arrived at his golden number: a 20-seat house with potential for overflow seating. He budgeted so that at 50% (or 10 tickets) the theater breaks even. After that the theater makes a profit up to a full house, at which point profits from overflow ticket sales go to the performers. Low-risk for Weller, no-risk for the artists. “It seems to make so much sense, it’s hard to believe no one’s done it before,” he says.

Weller plans to program the space like a year-round festival, with back-to-back performances and simultaneous rehearsals and events. “I want it to be full every night. I want there to be a rehearsal for a touring clown show in the rehearsal room while there’s five people hanging out in the bar talking about a show they saw last week and a show going on that’s like some guy playing Oregon trail.”

Weller’s not joking about Oregon Trail. So far the programming lineup includes traditional improv shows hosted by seasoned performers like Doug Willot of Jet City Improv and Oregon Trail expert Jim Stewart Allen, who will give live commentary as he hunts bison and writes tombstone inscriptions for fellow pioneers lost to typhoid.

Many of the performance projects Weller describes sound straight out of Portlandia. In addition to Oregon Trail Live!, comedians Jen Seaman and Chris Leher will produce “The Filling is Mutual,” a live version of Seaman’s currently in-the-works web series in which she will concoct a special dessert based on a stand-up’s routine and then serve it to an audience. Then there’s a show Weller likes to call “Ian Johnston Builds a Thing” in which, as the title suggests, Annex Theatre’s Ian Johnston will build something in front of an audience.

In addition to creating a centralized comedic hub, the Pocket will provide a stable base for currently nomadic entities like Seattle Comedy Group (producers of Comedy Sportz) and Minion Productions, a company that offers production support to independent performance artists. Grindeland will serve as the theater’s education director, lining up classes, workshops, and other forms of guidance for amateur comedians looking to professionalize.

The Pocket Theater will function primarily as a home for comedians and funny-makers but it’s also a space in which performers of all kinds can test experimental material. In other words, this could be your chance to produce that show you conceived in which performers improvise live music videos for Korean pop songs. Granted, because Weller is dedicated to cultivating and maintaining a certain level of quality, such performances may not make the cut or garner primetime slots. Still, the opportunity stands. In a culture where a majority of individual creativity is now disseminated digitally, the Pocket Theatre brings experimental artistic endeavors back into a physical space. Depending on how it evolves, the Pocket could essentially become the YouTube of live performance.