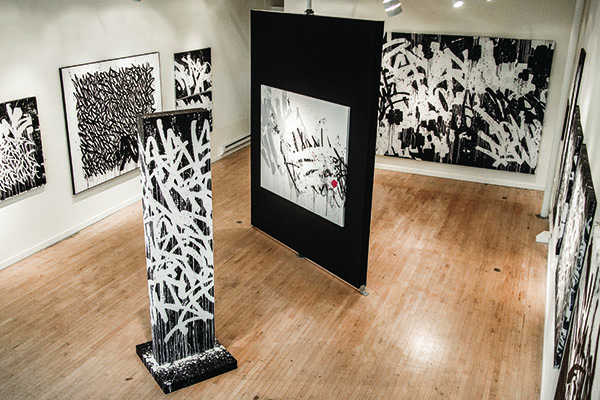 On a recent Thursday night during the Pioneer Square art walk, a smattering of kids with skateboards clutched underarm mingle outside Treason Gallery, quaffing cans of PBR and smoking hand-rolled cigarettes. Inside, the gallery is so packed it’s barely traversable: a motley mélange of artists, punks, b-boys and fashionistas decked in tattoos and expensive sneakers. Everyone is young—or looks it.

On the walls, Seattle artist Zach Rockstad’s oil paintings, executed in a classic style with hyperrealistic detail, unfold a Pacific Northwest coming-of-age narrative. It’s political—and not in a safe way. Saccharine paintings depict a bucolic Green River, a stretch of Aurora Avenue at night. A ready-made still-life sculpture spreads out on a plinth, featuring a stack of well-thumbed Bibles on a dinner plate, along with cutlery and a bottle of maple syrup. More impolite, if beautiful, imagery makes mincemeat of the Bible. There’s a sense something in here is particularly aligned with the sentiments of the time. The crush of the crowd makes clear that it’s all very now.

Like most galleries, the scene at Treason isn’t always so, well, scene-y. On an earlier, quieter weekday in July, the gallery sustains a trickle of passersby drawn inside by the imagery on the walls. There’s no front desk here, so as visitors enter, Treason director Matthew McMurry runs out to greet them personally.

“I’m a firm believer that if you do anything well enough it’s impossible to be ignored,” McMurry says, leaning against an unused plinth in the back room of the gallery. “Eventually everything else will follow.”

Treason’s back room is hung with prints and paintings by many of the artists the gallery represents. A shelf drips with work by Dallas-based artist Dan Lam, whose sculptures look like fluffs of extraterrestrial pastry studded with pointy prickles, sea urchins melting off a ledge. They’re coated in thermochromic paint that shifts color when touched, like a mood ring. It’s magical stuff to handle.

As McMurry talks, the plinth wobbles a little on its base; the entire scene is disarmingly casual. He’s dressed in baseball cap, sneakers, T-shirt. He says that he and his team of gallerists are not in it for profit, yet the gallery is peppered with red dots—a heroic pox of them—denoting robust sales.

The gallery’s moniker anticipates, perhaps defiantly, its outlier status. Like a phoenix rising from the ashes of a system on the verge of demise, Treason has come to occupy the brick and mortar space that previously housed commercial enterprises such as the much-loved Catherine Person Gallery, which showed prominent PNW painters and sculptors from 2005 to 2011.

The aesthetic of the art on view is slippery. Sometimes it veers toward straight-up street art, with work by renowned, New York-based Swoon, who cut her teeth making life-size figurative wheat pastes. Other times, the walls are covered in hyper-realism by artists like Seattle painter Casey Weldon. Some exhibits, like the paintings and installations by LA-based Bisco Smith, lean into abstraction, with sumptuous painterly marks resembling a mashed-up confection of street tags that channel the calligraphic cacophony of Cy Twombly. 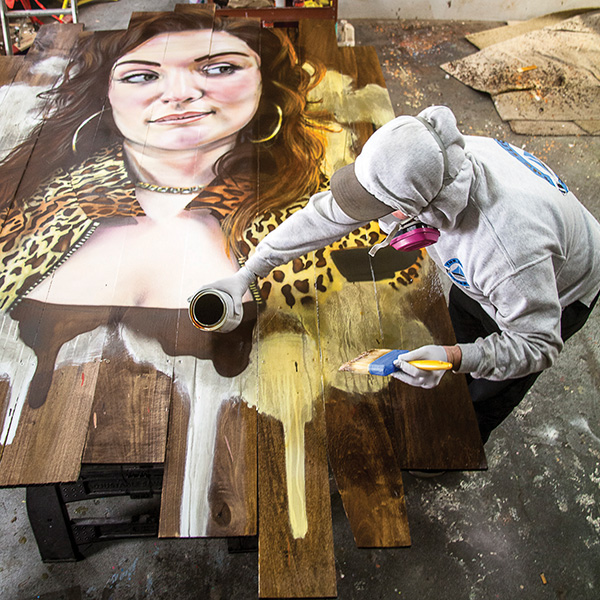 McMurry, 28, specializes in the descendants of street art. He grew up in Miami and moved to Seattle at age 15. His mother’s family had lived here since the ’50s; his uncle Vito was the founder of the eponymous restaurant Vito’s on Madison Street. Though McMurry studied art in college to avoid math classes, he ran more with the local graffiti crowd than art school kids. But he refuses to let the gallery be pigeonholed as a place that caters only to skateboarders and taggers.

“Graffiti can be a bridge to fine art,” McMurry says. “A lot of artists we work with have had a start in graffiti. But then, how do you really define art in an urban context?”

“Post-graffiti” and “urban art” have been used as umbrella terms to describe a decades-long evolution from graffiti to street art to mural art. Both terms are problematic, with racist undertones in some contexts, so McMurry shies away from them.

“There’s been graffiti in cities since the Romans,” McMurry says. “Typically, street artists operate without the need to receive consideration or acclaim from the fine art community, and that’s what sets them apart. The genre for me is relevance.” 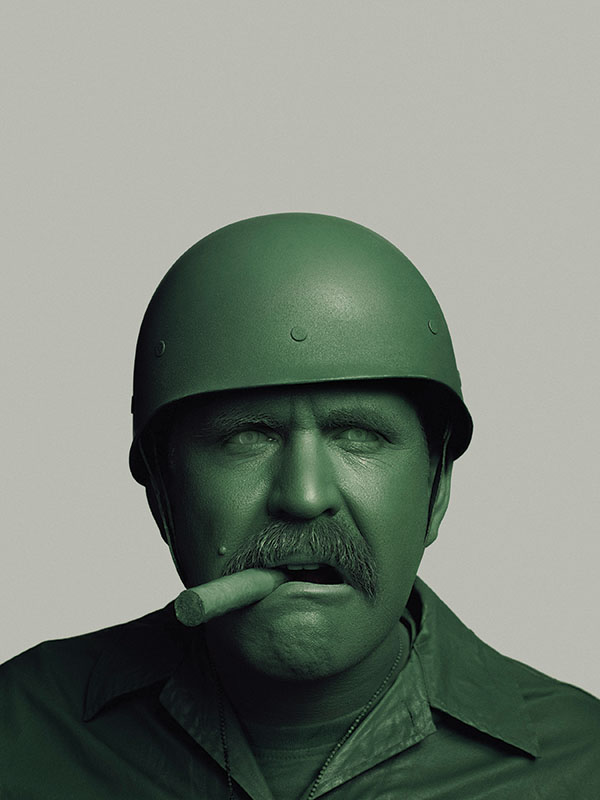 McMurry is adamant about adapting the gallery model not just to survive but to thrive—which makes sense, given his graffiti roots. From guerrilla marketing to protest, artists with a background in street art are frequently at the center of underground campaigns and human rights activism. For them, adaptation has always been critical.

Looking to create a community around these values, he opened a small boutique in Ballard called Sticks & Stones in 2014, where he amassed a team with similar taste. That group would go on to become the backbone of Treason, including Alex Munday, Jase Ihler and Dominic Nieri, who handle administration, gallery sales and production, respectively. When Sticks & Stones outgrew its storefront, they turned to Pioneer Square and snatched up the premier commercial space on Third Avenue and Jackson Street in 2015.

“I wanted to be in a central location to make sure we provided a means of interaction,” McMurry says. “Art is fundamentally the most important part of human existence and we’re in the midst of a new renaissance in terms of what’s going on with fine artists.” That renaissance includes game-changing marketing tools like Instagram, which have altered the relationship between galleries and artists by removing the middleman from viewing and buying artwork.

Many galleries lament declining sales, but that doesn’t seem to be a problem at Treason—a success McMurry credits to social media. The gallery expects its artists to excel at self-promotion and attracting online sales. “We understand that social media as a commodity is worth more than money at this point,” he says. “The telephone is no longer the thing that bridges the gap between gallery and consumer and artist.”

Treason cultivates collectors from all walks of life. Many of their new collectors are local and work in tech; others are young urban professionals living in Seattle. They pull in collectors from all over the globe, from folks in the LA’s entertainment industry to clients in New York finance. Some have never physically set foot in the gallery. The one thing they have in common is a taste for what Treason offers. “Most of our collector relationships have started out small and grown with our rapport with them,” says McMurry. “We’re in a business of relationships, whether with artists or collectors. Relationships are the foundation of our existence.”

Treason aims to do more than just sell art. When out-of-town artists show, the gallery flies them in and puts them up in a studio nearby to live and work. The owners have played a major part in funding and co-curating the Belltown Corridor, an expansive mural project that’s dressing the neighborhood with outdoor pieces by artists from as far away as the Netherlands. The hub of the project is Belltown’s newest art bar, the as-yet unopened Jupiter, founded by Seattle artists Joe Nix and Jeff Rogers. Nix has commissioned local artists like Baso Fibonacci and Crystal Barbre to line the interior with murals.

In an era when Keith Haring and Basquiat are selling for record prices at Sotheby’s, Treason has reason to be excited about cornering the local market on street art-inspired work. There’s no serious competition for them in Seattle, McMurry notes, now that Roq la Rue has shuttered. But despite a tight-knit community of supporters and plenty of local interest from emerging collectors—including the elusive tech community—McMurry has been snubbed plenty. For instance, Treason wasn’t admitted to this year’s Seattle Art Fair.

That doesn’t mean they won’t be putting on a show during the fair. In August Treason is exhibiting the first-ever Seattle solo show of Shepard Fairey—one of the most famous street artists in the world, creator of 2008’s Barack Obama “Hope” poster and, more recently, a suite of activist-oriented “We the People” posters. The show is a retrospective of Fairey’s decades-long career and an extension of his Printed Matter series, which includes handmade collage, prints on wood and metal, small hand-painted multiples in editions of three or five, and his dollar bills. Fairey will be in attendance.

In another zag from the gallery norm, of the three dozen artists Treason currently represents, only a handful are local, including Joe Nix, Andrew Barnes, John Keatley, Duffyleg, Erica Ciganek and Casey Weldon. “I wanted to make sure that people see artists the rest of the world is seeing,” McMurry says “It’s imperative not only for the economy of the art world but the health of the art world. As Seattle continues to evolve and grow, it’s critical to the identity of Seattle that it embraces artists who are celebrated in the major cities across the globe.” He points out that Seattle is no longer a sleepy little outpost off the radar from the art world.

“Seattle is such a young city compared to most, and is insular, introverted and holds value in regionalism,” says Patrick De Armas, aka Duffyleg, an artist who signed with Treason 18 months ago. De Armas met McMurry when McMurry was still working at Sticks & Stones in Ballard, and he was impressed by some of the New York-based artists the shop was bringing to Seattle—artists De Armas never thought he’d see in person.

“Traditionally there’s a culture [in Seattle] where, instead of leaning into patronage of arts, people would rather have their Levis and Subarus and a cabin in the woods and you’d never know they’re millionaires,” De Armas says. “These guys [at Treason] are helping to provide dialogue and act as a conduit for artists to move both in and out of the city. You don’t typically see that in freezy Seattle, where people aren’t that vocal, that confident about what they want to do. It’s a bit shocking to be around people with so much confidence, with this kind of aura. But Treason is part of the solution.”