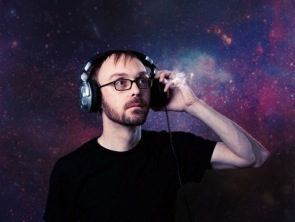 As he steadily moves from collaboration junkie to solo artist, Geoff Weeg teaches us the art of GarageBand composing – and of taking electronic music seriously.

For Geoff Weeg, the endless categories of electronic music can be boiled down to two simple ones: dancing and listening. Both, he claims, are paths to experiencing music viscerally. But suffice it to say that Weeg, a tall guy with a wry sense of humor, doesn’t dance much.

Using computers that predate the Internet, basic music keyboards, various drum machines (including one found at Tacoma’s “St. Vinnie’s” thrift store – for a dollar) and an extensive portfolio of found sounds that his collaborator, City Arts contributor Jeremy Gregory, collects on a digital recorder (the groans of a delivery truck, or footsteps in a quiet hallway), Weeg composes hundreds of tracks that are best described as ambience. 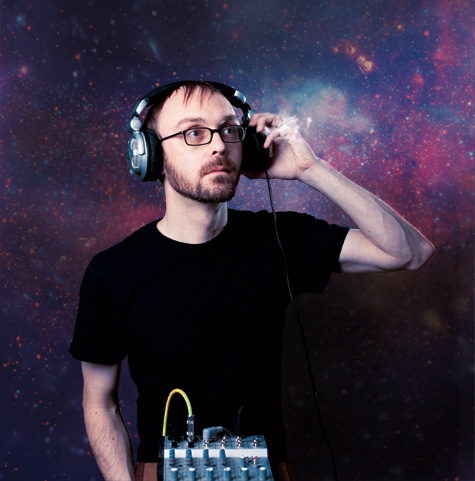 To create that ambience, Weeg samples tiny pieces – fractions of a measure or a beat – from computer beats or those found sounds, then layers and loops them (with live music sometimes) and arranges the whole thing into something unexpected. He does this well enough that the final composition doesn’t reveal its Frankenstein DNA. It just builds up a scaffolding of synchronous noises – and at the pinnacle, a melody or a progression drops like a banner from the top.

Think of the sounds you make every day: the opening and closing of drawers, the clink of the spoon as you stir your coffee, your heels on the pavement, the click of your computer keyboard. All of these sounds could be hidden in a Geoff Weeg composition – and unless you have Superman hearing, you’d probably never know they were there.

A native of Rochester, New York, thirty-three-year-old Weeg moved to Puyallup in 1993 when he was fifteen. His mom had finally found a good job in Renton in the midst of a tough recession. One of his early memories of Tacoma involved taking a bus into town on an especially grey northwestern day and noticing bullet holes in the window of a bank. Needless to say, he felt fine sticking close to his neighborhood, where he met the skater and punk friends with whom he would eventually form his first punk band, including the Seattle hip-hop producer now known as Absolute Madman.

Now Weeg lives in Tacoma but works as a bookkeeper on a vegetable farm in Puyallup. When he’s not writing music, he’s working on visual art in various media.

Weeg learned drums and bass by accident, as he describes it. Although he has played drums in several bands – Committee for Public Safety, Tallest Tree and Humble Cub – and even toured with them, he’s never owned a kit or learned guitar. He jokingly refers to himself as “a one-hand-at-a-time guy” and proceeds to demonstrate:

Due to some upheaval in his personal life – which he asks me not to print – he’s decided to give up many of his collaborations with local musicians. He’s always thought of himself as more of a supporting player in bands anyway, and he wants to compose more.

The project he’s focusing on for now is his new music project Off Model, which involves more regular collaboration with Gregory, a friend for over fifteen years who, in addition to recording sounds every day, also plays kalimba (nicknamed the “thumb piano”) and trumpet and is generally an ostentatious and vocal character. All of these elements are recorded and considered for sampling, too.

The name Off Model is inspired by a term used in animation, referring to a mistake made in drawing an established cartoon character. For example, if you draw three extra spikes in Bart Simpson’s hair, it’s considered “off model.”

“I flipped it around to where that can be a good thing,” Weeg explains. “A lot of electronic music is really programmed and sequenced, and there’s not a lot of human error in there. When you hear it, it’s all perfect. But it doesn’t have to be that way. Cultures that don’t have TV or running water – think of the music from those places. They’re not recording CDs and selling them to people. They’re playing and passing along traditional rhythms, traditional melodies. And maybe it’s not the same as it sounded last week, last year – but it still serves the same purpose.” 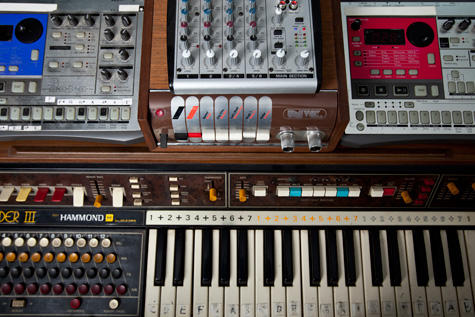 Some of Weeg’s music-making equipment.

Electronic music isn’t new. But it does feel newly popular – more acceptable, somehow. Perhaps it’s because Radiohead’s groundbreaking album Kid A back taught us how to listen a little differently to digital sounds back in 2000. Or because Kanye West’s brilliant sampling and disregard for most everything showed us how to break down the barriers between music genres. Maybe it’s just that the Internet helps to close gaps in time and space in general. But it definitely seems like a lot of bands are now incorporating electronic drumbeats in their arrangements. Broken Bells, the collaboration of Dangermouse and James Mercer from the Shins, is a microcosm of the now, a time when conventional musicians and electronic or hip-hop artists find themselves in league with one another. Also, pocket-sized Casio keyboards, melodicas and moogs are in again, as is a homemade, handcrafted mix-tape approach. Where once the phrase “electronic music” conjured up (for me) images of kids with purple hair sucking on pacifiers, or that frightening front man of Prodigy, there’s now a more complete and more appealing picture in the mainstream that seems more from this world, including Postal Service, LCD Soundsystem and RATATAT.

Not to be disregarded is the freedom offered by increasingly more accessible software like Apple’s GarageBand, originally released in 2005. Not only can anyone be empowered to become a DJ just by learning to “drag and drop” in that program, but artists have ready access to an infinite number of MP3s. No more digging through Goodwill record bins, no more broken needles, no scratches. Just click, click, click – play. Of course, creating something people actually want to listen to is a different story.

I ask Weeg, who started making electronic music on an early version of GarageBand, to demonstrate on my laptop how he makes a song. In less than ten minutes, he crafts a fairly complex musical loop that incorporates an odd mix of prepackaged sounds that come with the program, including one beat titled “Ethereal Sunrise” and a bird call that he surmises is a morning dove or some kind of goose. He simply calls up the “musical typing” function, tests a few sounds and then quickly taps out a melodic loop (one finger at a time) – then cuts and pastes it to make a full song. The track is beautiful. I ask if I can keep it.

Weeg says he prefers melodic stuff as opposed to, say, some of the more out-there stuff that electronic artist Aphex Twin produces. It makes sense; although Weeg can be goofy – he does an awesome impression of Dave Chapelle’s “Turn the Headphones Up!” skit – he comes off as a pretty gentle guy. And the titles he writes for his tracks read like little emo poems: “Buildings Are Boring Colors,” “Trees Block My View of the City,” “Meet Me All the Way.”

“I’m not a historian, so I don’t exactly know when – but probably in the ’70s sometime, when disco, electronic music and hip-hop split off from being one thing – that one thing is what I like. If you listen to old Grand Master Flash or Ice T tracks, they might not sound, musically, too much different from Craft Work or something like that. A lot of the same instruments, a lot of the same methods were being used: samplers, drum programming. I kind of like that spot where it could be anything.”

I try to get him to confess to a guilty pleasure he only listens to when he’s alone. I thought electronic sample artists were supposed to be fluent in discordant languages, like Dolly Parton, Lady Gaga and Rancid. Right?

Well, there is no such thing as a “guilty pleasure” in Weeg’s library. He’s focused on just listening and staying open minded. “I guess if people don’t want to listen to something around me, we won’t listen to it,” he deadpans. “That’s not guilty – that’s courteous.”

It’s easy to picture a GarageBand composer hunched over a computer and uncomfortable with social interaction. But Weeg is no shoegazer. He wants to perform. He just needs the right equipment to be able to compose before an audience (the alternative is opening his laptop and pressing play).

Other than that, his plans right now are pretty open ended. I suppose that, as with his music, he’s figuring out how to put the pieces together as he goes.

He’s definitely interested in sticking around in Tacoma. Ironically, he gives the last reason I would expect to hear from a musician who samples sounds all around him: