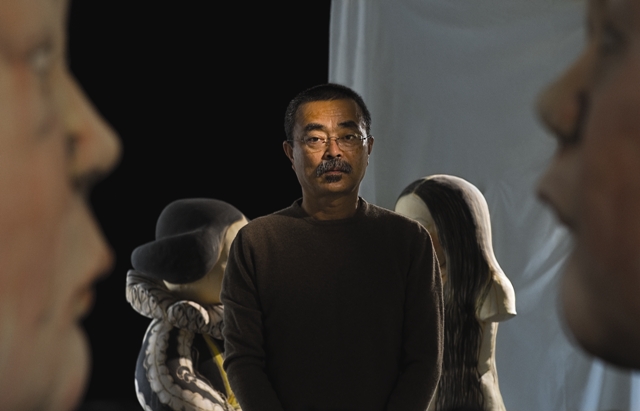 At 57, sculptor and UW professor Akio Takamori finds himself on the edge of fame.

It was 1996 and ceramic sculptor Akio Takamori had just received a package that contained pieces of his past. Delicately unwrapping the objects, he placed them on the floor of his studio: a miniature version of the city of Nobeoka, Takamori’s childhood home in southern Japan. Out came a fishmonger’s stall, a pedestrian bridge spanning a canal and a group of tiny citizens.

Takamori created the work, titled Village, in 1976. It had returned to Takamori’s life in a roundabout fashion – the owner had purchased the sprawling piece when Takamori was still a student at the Kansas City Art Institute, but because of its size rarely displayed it. He was suggesting that he might trade it for a more recently created work, something easier to exhibit.

Takamori, who currently teaches at the University of Washington, hadn’t seen the work in almost two decades, and it triggered a flood of memories. The Raku-fired pieces still bore the scent of the Kansas City kiln where they were made. As he handled the various components that made up Village, he was transported back in time – to his days as a newly arrived immigrant student, and then further back, to a time when he traveled Nobeoka’s village streets as a young boy.

His father, a dermatologist and urologist, operated a venereal disease clinic. Here young nurses from the countryside regaled the doctor’s son with stories steeped in superstition, stories in which the human body was often just a guise for supernatural powers. The father’s science and the nurses’ superstition combined to fill Takamori’s head with a multitude of ideas about how the world operated and how it could be perceived.

Born in 1950, Takamori is slight and spry with a straight brush of moustache and glasses. He could pass for much younger than his fifty-seven years. In 2008 he was the recipient of a Neddy fellowship, a prestigious and unrestricted cash award offered annually by the Behnke Foundation. (The fellowship has existed since 1995, and is a memorial to painter Robert E. [Ned] Behnke.) Artists do not apply for the Neddy: Potential recipients are nominated for the merit of their artistic vision, as well as their passion for both art and community.

In the wake of the Neddy Takamori finds himself a bit of a celebrity. Yet he has been revered in art worlds near and far for well over a decade. His work appears in the collections of the Victoria and Albert in London, the Taipei Fine Arts Museum in Taiwan, the Museum of Arts and Design in New York, the Rhode Island School of Design Museum, and the Museum of Contemporary Ceramic Art in Shigaraki, Japan, to name but a few.

He arrived at the UW in 1993. There he is revered as both teacher and artist. Former student Mandy Greer was in the undergraduate program studying fine art at the University of Georgia when Takamori visited in 1996. Explains Greer, “Takamori was already famous, a celebrity. It was like having Britney Spears show up. And yet, he was so modest.” When Takamori met with Greer about her work, she knew she wanted to follow him back to Seattle. “He was the reason I became interested in coming to the University of Washington in the first place,” she says. “In critiques he was very quiet, saying one or two things, but always the most important thing, and you’d realize later the significance of his quiet observations.”

Greer – an accomplished artist herself whose installation Dare alla Luce was recently on display at the Bellevue Arts Museum – remembers a feeling of freedom unleashed by his teaching. “I had little understanding of how radical the program could be. Students were encouraged to go in any direction they wanted.”

Takamori knows a thing or two about the benefits of change. In the 1980s the art of ceramics was quietly being transformed as U.S. potters began reworking the idea of the vessel. Takamori was a key figure. His signature slab-formed vessels often used a strong frontal format to fuse the concept of vessel to drawing: His subjects – lovers, family, mythological figures, animals – both decorated and took the shape of his pots.

Takamori’s treatment of the pot was a revelation in the history of American ceramics, and it took collectors by storm. He used the elliptical space between the front and the back as a highly charged and decorated field, while the rim of the pot remained fluidly subject to the contours of his figures. It was work that invigorated formal aspects of the pots’ construction, such as the melding of interior and exterior, while also fostering discussion of “inside” and “outside” as they pertain to the experience of seeing and being seen.

Jason Huff, another former student, is a ceramic artist and public art project manager for the City of Seattle Office of Arts and Cultural Affairs. He says of Takamori’s work: “Akio never makes a bad mark. Whether it’s a ceramic sculpture, print or drawing, he has an incredible ability, through use of simple contours and lines, to make his artworks feel incredibly human.”

Before he discovered ceramics, Takamori studied industrial design at the University of Tokyo. During an apprenticeship with a domestic potter in the village of Koshiwara he was rigorously trained in the production of folk-style pottery, or mingei. He worked from sunup to sundown with one day off a month, creating identical teacups. “I may not have learned much about the act of creating, but I did learn about discipline. It gave me a strong work ethic and a sense of security. For the rest of my life I knew I’d have the skill of making those cups.” His English, poor as it was, was better than most, which was why his employer abruptly woke him from a deep slumber on his day off to escort a newly arrived foreigner around the village. The foreigner was master potter Ken Ferguson, head of the ceramics department at the Kansas City Art Institute. It was an encounter that would change the course of Takamori’s life.

“Looking at Ferguson,” Takamori says, “I saw an old man. In reality he was younger than I am now.” Takamori showed Ferguson around the site and during a casual chat over Cokes mentioned his desire to study ceramics in America. “I knew I needed a more creative education.” Ferguson quickly invited him to apply to Kansas City. “Most people say things like that,” says Takamori, “and you never hear from them again. But a week later an application to the Institute arrived in the mail.” One year later, in 1974, Takamori was on a flight to the U.S.

In Kansas City students worked round the clock. “Sometimes they would hide in the closet to work throughout the night, just going home to sleep and eat. I was impressed with that. I knew very little about ceramics outside of my narrow field of focus. My apprenticeship had been limited to the production of mingei, folk pottery. But in Kansas City students knew all about Japanese ceramics: Oribe ware, Shino ware, Karatsu ware. They knew more than I did. And Ferguson was also a big fan of filmmaker Akira Kurosawa, so I found myself discovering my own culture from within America.” Takamori executed Village at the end of his second year in the U.S. and exhibited it as part of the BFA show prior to graduation. “I started really thinking about Japan, and about issues of displacement, the place where I was born and raised. I didn’t call home, the telephone was too expensive, and there were no computers. All I had was my mind. My memory.”

The figures in Village are mere caricatures, squat-limbed and painted with slightly cartoonish facial expressions. They seem to embody childhood remembrance, that shadowy realm in which choice images are captured perfectly while others are left to sink back into the ether. Because of this, Village is not a historically accurate structure, but rather a highly personal sketch of a long-ago time and place.

By 1996, when Village reentered Takamori’s life, he had been working with his slab-form vessels for more than a decade and was becoming increasingly dissatisfied with the direction of his work. He had recently been granted a residency at the European Ceramic Work Center in the Netherlands and it was there, as Takamori’s former New York dealer Garth Clark has noted, that Takamori underwent a transformation, leaving a potter and returning a sculptor.

In the Netherlands, Takamori again turned towards his childhood home. Omitting the architectural structures, he concentrated only on the people that populated his memory. This time, however, they loomed larger than in Village. He worked unceasingly, creating approximately three figures a day: gossiping women, students carrying satchels of books, kneeling children. They do not represent individuals, but rather types that Takamori recalled from postwar Japan. At the end of his residency he had created about sixty large-scale, freestanding “dolls” that he could reposition and regroup at will.

In recent years Takamori has been making revisions of another kind. Borrowing iconic figures from the paintings of Western giants such as Diego Velázquez, Francisco de Goya and Giorgione, Takamori transforms them into sculpture, inserts them into his installations and thereby places them on a par with his rural villagers. For the Neddy Artist Fellowship Exhibition at the Tacoma Art Museum Takamori displayed two figures. One, a female dwarf, was lifted from Velázquez’s painting Las Meninas. The second merely hints at links to seventeenth-century works of art: it’s a Japanese version of a Spanish princess, kneeling with her hands folded on her lap and a wide white ruff around her neck.

Rock Hushka, curator at the Tacoma Art Museum, applauds Takamori’s astonishing technical feats and emphatically states, “His work is psychologically powerful because of the way he understands both human nature and art history.”

Being raised in Japan and coming of age in the U.S. gave Takamori a dual perspective, and his work often embraces the tension of “otherness,” the collision of present and past. In one of his memories from childhood he recalls glimpsing maggots amidst blood at the bottom of a cesspool at his father’s clinic. He was just about to pour boiling water down the hatch when one of the young nurses stopped him. She explained that to do so would be unwise, as a beautiful, but invisible, goddess inhabited the toilet. Similarly, Takamori’s work occupies this unusual realm of divergent realities and contrasting cultures, where the awkward and the awesome coexist in the same territory without canceling each other out.